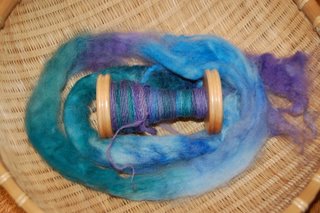 My friend Wayne contacted me several weeks ago to see if I’d make hats for his nieces and nephews as Christmas presents. He’d like his nephews hats to be from the wool of his own sheep, which I already have as yarn, and I think he wanted his natural colored wools for his nieces as well. I wanted to do colors for the girls, and he agreed. So far, I have Navajo-plied the contrast color, finished the purples/pinks and am spinning the greens/blues. I have vague plans for the girls hats, and after phishing on the web, have definite plans for the boys. 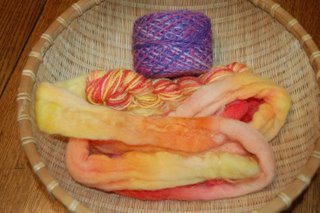 I have two more booga bags finished, fulled in the washer and now drying on forms, i.e., oatmeals boxes and a trash can. I experiemented with mixing types of wools so don’t know how satisfied I’ll be with the outcome of one. I’m trying to see this as an opportunity for design. I can see that Border Leicester doesn’t full at the same rate as the Coopworth, which leaves the bag wider at the top than at the bottorm. I haven’t decided how to make this look like I meant it, but it’ll take the bags a couple of days to dry so that’s a couple of days to fret. 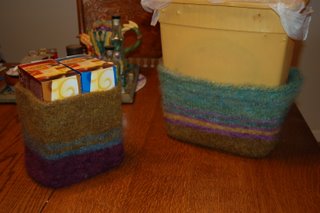