The Dreadful Work Schedule has Ended Sharon's sweater
Originally uploaded by Purple Fuzzy Mittens
Look what I found out when I visited Amy's Flickr photostream of the fair. My Sonnet sweater won reserve grand champion in the handspun/handknit division. My work schedule didn't permit me to attend this year, but what a gift Flickr photostreams are to those on the receiving end. I told her that her wonderful pictures brought the experience home to me and made me cry. She apologised - no apology necessay. 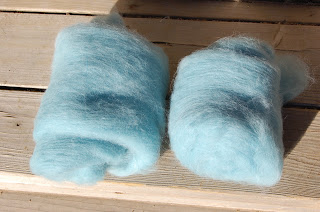 I kicked off my two-week vacation yesterday by spending several hours at Mim's, processing stuff on her electric Patrick Green Supercard. This is a blend of hoggit Ramboullit, Alpaca and bunny. These two bats weight two ounces. I see a lace scarf it their future. 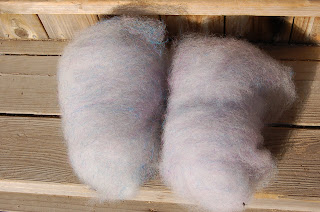 Laura brought us some sari silk loom waste from Woodland Wool-
works last Christmas. I found it yesterday morning getting stuff ready to take to Mim's so I grabbed it and what I thought was Coopworth/Salish locks but instead was Border Leicester - not what you'd think of when you think of blending silk. We cut 2" lengths of two colors of the silk and then ran them and the locks through the carder a couple of times to get this. Again, it's about two ounces of fluff. I left the sari silk with Mim - I'm not sure I could find it a second time. 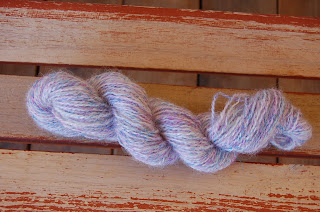 This morning on my second day of vacation, I sat on the deck in the cool of the morning and spun this up quickly using long draw. It will probably get knitted into a bag. Warning - the sari silk loom waste is not color fast. Neighbor Tom was helping Ian set up a large hunting tent for our annual Gathering this weekend. He wanted to know if I get calluses from spinning. I showed him how the wheel does the work. Lots of coffee and visiting - it was a great second morning of vacation. I have read the snearing note assigned to "staycations" but I am so excited to get one - finally.
Posted by Sharon at 5:58 PM 11 comments: Links to this post

A New Piece of Furniture 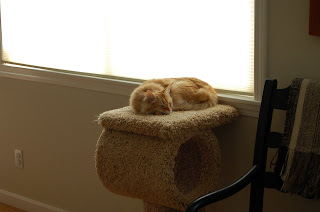 I bought this kitty condo from Costco last week at the recom-
mendation of my coworker, Michelle. She said she just bought one and her cat loved it. I spent more on the condo than on the cat and Charlie wasn't impressed. He batted at the ball, napped on top, then went to sleep in our bedroom window. I was kicking myself. 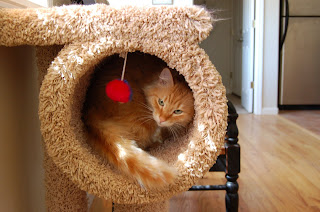 Several days later I heard a racket and checking on the source, found Charlie in the condo, giving the ball a work-out, boxer style. I have to admit that by this time I had gone outside to clip the last of the catnip and spread it liberally all over the condo. 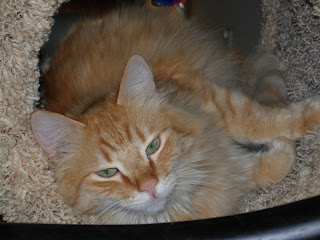 I think Charlie actually likes it. Silly me - does one ever know what goes on in the mind of a cat? It's so big that it's now a piece of furniture in our house, and this is the smallest one they sold.

"You bought me the *smallest* one?"
Posted by Sharon at 9:17 PM 3 comments: Links to this post 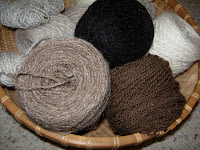 Somehow I figured that a moorit sheep would always produce moorit fleece so I merrily used up Ollie's fleeces. The truth didn't dawn until I opened the box from Morro with Ollie's latest fleece and realized I was in trouble. As you can see by the ball on the bottom left, Ollie is now coffee au lait. 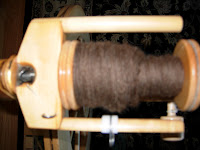 This is the very last of Ollie's moorit fleece - the end. I dropped off my fair entries at Mim's on my way to work on Tuesday - she was taking them in with hers. I had asked her earlier if she has any moorit Shetland and she does, though I can see that hers is a little more dark chocolate to Ollie's milk chocolate. She didn't have much on hand but says that she has another entire fleece. She has a Patrick Green electric triple-drum carder so I can buy from her by the processed ounce - that's good news.

I just finished this hat, one of an order I have for Christmas. I think it's cool that both incarnations of Ollie are here, but I am also glad to know that I have a source for more brown. I think the hat would look pretty wimpy without brown.
Posted by Sharon at 8:16 PM 3 comments: Links to this post 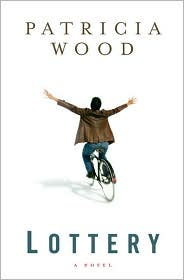 I loved this book! I chewed my fingernails, teared up several times and best of all laughed out loud - a lot. It was like reading Forrest Gump meets Chauncey the Gardner (Being There, Peter Sellers) and they win the Washington State Lottery. I want a sequel!!

My name is Perry L. Crandall and I am not retarded. Gram always told me the L stood for lucky.

"Mister Perry Lucky Crandall, quit your bellyaching!" she would scold. "You got two good eyes, two good legs, and you're honest as the day is long." She always called me lucky and honest.

I came across this title in Bookpage. I've actually found several reviews from this resource that have lead to good reads, including the one for Anne Reeve Lindbergh's Forward from Here. I liked that one so much I've already gifted it twice.

I so loved The Lottery, that I have no idea what I'm going to read next. It was short-listed for the Orange Award so maybe the next place I need to look at is the books they have selected. I am a huge fan of first fiction. To Kill a Mockingbird was first fiction and it is our book club's next read.

I was telling my SIL about it on the phone tonight. She's the one who recommended A Yellow Raft on Blue Water by Michael Dorris to me, which I just finished re-reading last month. I told her that our Book Club read The Painted Drum by Louise Erdrich last month. Those two had been married at one point, and these two books together could be part of a college curriculum. Of the two, I favor "Yellow Raft" but I think the book club would disagree. I live by a Rez and "Yellow Raft" seems hard truth - "Painted Drum" has an edge of mysticism. Have you read these and do have thoughts?
Posted by Sharon at 9:49 PM 3 comments: Links to this post 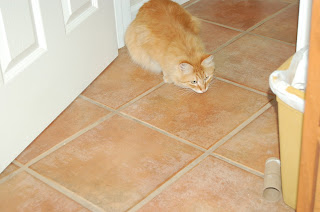 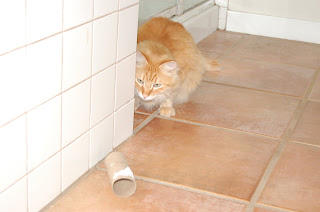 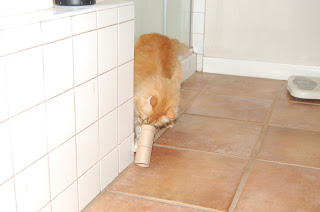 From toilet paper roll - to cat toy.
Posted by Sharon at 3:14 PM 7 comments: Links to this post

Back to the Brewery Arts Center 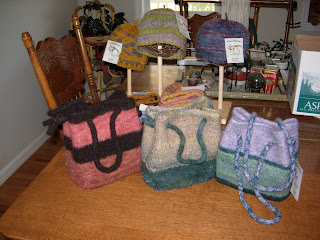 To my surprise, I got a letter from the Brewery Arts Center last month saying that the remodel-
ing of the Artisans' Store was nearly completed and asked me to submit a statement of interest, which I did. They anticipate that foot traffic will increase because of the added coffee shop, so I decided to try these three bags - you know, test the waters. They were apparently too pricey to be successful in the old store. 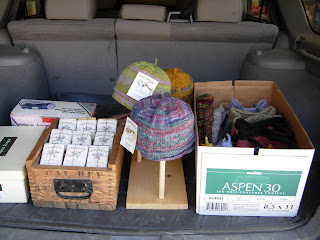 I asked Allison if she'd care to accom-
pany me and she said she would, but that she had to teach at Jimmy Beans until 1:00. I told Ian that was just too late -I wanted to get down there and get home. He told me to just go when she was available and enjoy the visit - he's a wise man. It look me all morning, from the time that Charlie started playing cat hockey on the bed at 7:30 until 11:55 when I loaded the car, to get everything refreshed, relabeled and new inventory sheets printed. I had five minutes to wash my face, brush my hair and change clothes - no time to shower - it took me ten minutes and I just made it on time. This picture in the back of my car is a summary of my morning labors and many many hours of work. I'm disappointed that is doesn't look like more. 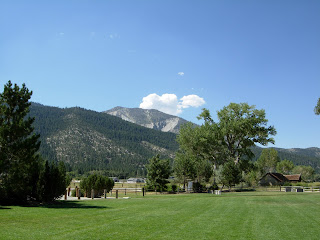 We stopped at the new Whole Foods and had a salad before heading south. Allison says a nickname for Whole Foods is Whole Paycheck. That was a new cultural experience for me. My organic store experiences were co-ops, open binned foods and hippies. I've know Allison since 1996 and just learned that she is a fly fisherman. Driving back home, she asked me if I wanted to stop and see "her" pond. This is a county park in Washoe Valley. 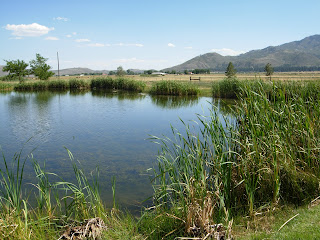 This is Allison's pond. It sits at the base of Slide Mountain, so named because the southeast side of the mountain slumped off in a slide that formed foothills of rubble on its eastern base. 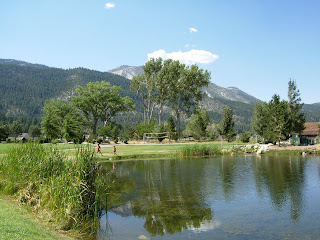 And here is Allison's pond with the Sierras and Slide Mountain as backdrop. So many people think of Las Vegas, casinos and neon lights when they think of Nevada. I want people to think of this. 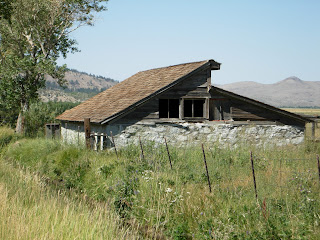 We took a wrong turn leaving the County park and had to turn around, but not before I snapped this picture. I asked Allison if she minded my jumping out to shoot it and she said, just leave the car running. It was 95 degrees. I didn't relish returning my stuff to BAC and it turned out to be a really nice day. Life surprises me like that all the time.
Posted by Sharon at 5:45 PM 8 comments: Links to this post 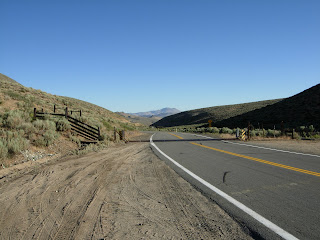 We drive through open range country on the way home, and this time of year, I am very aware of why there's a cattle guard at the top of Ross Creek Canyon. 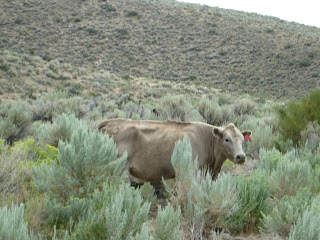 Red Rock Road is a windy road. However you want to pronounce windy - it's both. Every year someone hits and kills a cow. How'd you like to come around a bend see this bossy in the middle of the road. 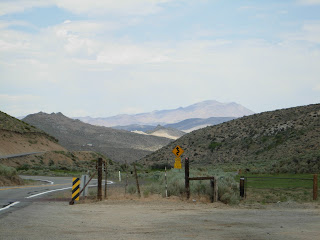 From the cattle guard on, the turns are sharper and there's also a drop off. Don't want to meet no stinkin' cattle here. People drive off the road and kill themselves without the help of bovines. 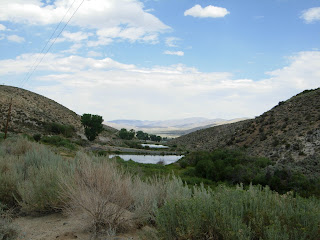 The creek is dammed into three ponds at the bottom. You really don't want to drive off the road into one them, but that's happened too. The ponds attract all kinds of fowl, including white pelicans. That vista is the eastern part of Red Rock Valley. I never tire of coming around the bend and seeing it. I fell in love with this view the first time I came out seven years ago and I love it still. 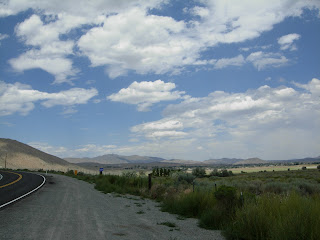 This is the beginning of my drive on Red Rock Road, after leaving the freeway. The mountain in the back-
ground is Peterson Mountain and it's what we see from our living room window. 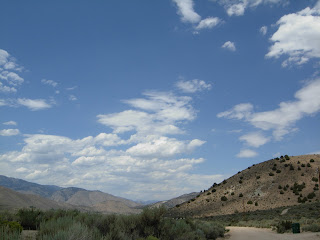 After driving for twenty miles, this is my dirt road. Peterson Mountain is on the left, the Sierras are straight ahead and Porcupine Mountain in the right - we live on the west face of it. Thanks for riding along.
Posted by Sharon at 6:32 PM 7 comments: Links to this post