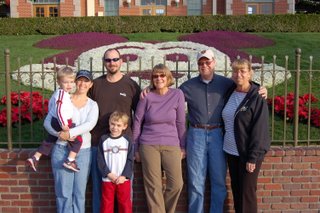 We’re back from , broke, exhausted and happy. We went with son, DIL, DIL’s mother and two grandsons. tmas, and grandsons doth a merry medicine make. Also broke, or so we thought, was the camera. I set it down too sharply and it responded by refusing to take any more pictures, as if it decided 264 was enough. I felt terrible – it’s Ian’s baby – and so I decided to spend soap money on a new point-and-shoot camera for me when we got home. 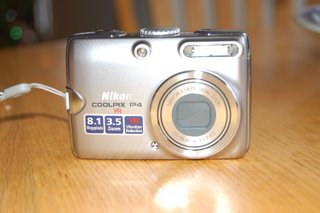 This is my new baby and the good news is that the delightful folks at Gordon’s put Ian’s camera back into working order in minutes, at no charge. This is our second Nikon Coolpix, the first we purchased about four years ago and have since moved it on to live with son-in-law-equivalent, Michael. He likes it and I don’t feel guilty about not using it. 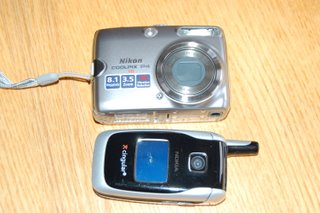 That camera was nearly as large as Ian’s Nikon DSLR, so I took a second shot of my new camera with my cell phone for scale. It’s tiny and still has 8.1 megapixels. I think it also has video – not sure. 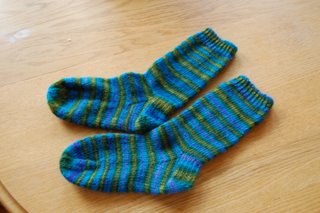 Since we were flying I took two knitting projects, just in case I ran out of knitting. I was thrilled to finish the socks from my Navajo-plied yarn (earlier blog called Navajo Plying) and was even more thrilled how much alike they came out. I have found that socks from 100% wool are comfortable where the nylon/wool blends tend to be abrasive. 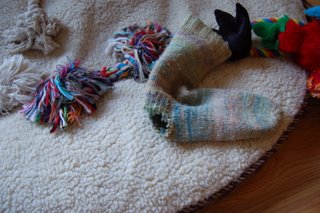 This is my second pair of all wool socks, or so I thought – until I found one of the socks from my first pair on Eddie’s dog bed. I got the message – he loves to go to the kennel but he really missed me.

Disneyland with kids is always a blast. Glad you had a good time.

The socks from the Navajo-plied yarn are awesome! You inspire me. I'll add trying some to my ever-growing list....