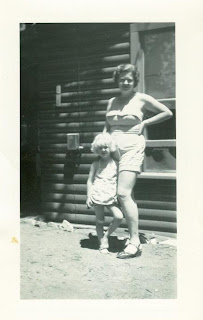 This picture was taken when we lived in Twain Harte, California and is my favorite picture of Mother and me. I think the posture says so much. Today is Mother's birthday - she was born in 1905. Her father had an exhibition called An Eskimo Village at the 1904 St. Louis World's Fair and her mother was his ticket seller. Mother went at life full tackle and sometimes I felt like the cans dangling behind a "Just Married" car, but she saw life like Larry the Cable Guy, "Get 'er done." There wasn't a timid bone in her body. She taught me so much, including how to knit when I was nine. She learned from the Red Cross so she could knit socks for "the boys" as part of the war effort ,and I am thrilled to be a part of those lessons, be it as a grandchild. As for grandchild, her first was born ten months after me. She played piano in a honky-tonk bank, dated a moonshiner during the depression, and lived on a horse ranch in Wyoming, where she broke horses.

Ian and I bought her a Web-TV when she was in her 90s and she couldn't help marveling that in her life time, she had gone from cleaning lantern chimney black,to surfing the Internet from her Lazy Boy. Happy birthday, Mom, wherever you are.
Posted by Sharon at 9:51 PM

Sharon, what a wonderful tribute to your mom. A beautiful way to celebrate her birthday.

She sounds like a remarkable lady! That she even wanted to surf the net in her 90's is the marvel to me. Thanks for the inspiring message as your tribute to her.

What a great story. It truely is a wonder isnt it...

Christina and Alexia all rolled into two

I still marvel at all your mom and grandmother did - good sturdy pioneer women. They had truly interesting, stimulating lives in a time when women didn't always have the chance to branch out. I do wish I could have met her - she sounds like my kind of gal!! I also thank her, wherever she is - I love her lazy-boy!!

I miss her so much. That brought tears to my eyes.