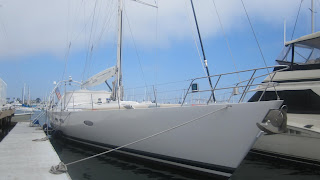 I was hoping we would be able to see Lori and Joe while we were in San Diego. We had some free time on Sunday so I texted her and we ended up going to their place. This is where they live, The Locura. Lori tells me the name comes from the Spanish word for loco or crazy. Joe is the captain and Lori is the cook. The owner got a deal when he got them! 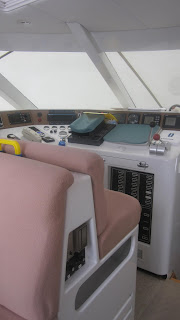 It was warm and sunny so Joe had the canvas over the glass. Otherwise, it would have been a 360 view of the harbor. This is where he drives the boat when he's operating on autopilot. 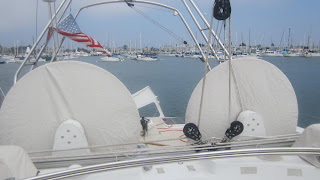 The ship has double helms and it would be driven under sail from here. My father in law was a Navy captain and he delighted in saying that he was a boat driver, instead of a ship sailor. 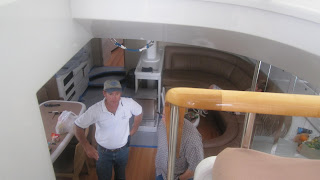 This is Joe. He's the boat driver. We met as neighbors close to 30 years ago. They always said that when they had an empty nest, they were going to sell everything and live on their boat in Richmond, California. They are originally from Florida and love sailing. Who knew their journey would end up here?! 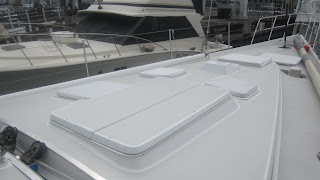 Lori couldn't wait to show me this. It's the hot tub and also sail storage. We have a long hot tub history which I won't go into, but I can remember cross country skiing the mile from my new house to theirs after we moved but yet were still nearby, and enjoying their in-ground hot tub with the snow flying and the steam rising. The worst part was skiing home - uphill! She texted me on Saturday to see if we wanted to hot tub and I thought she meant at their hotel. 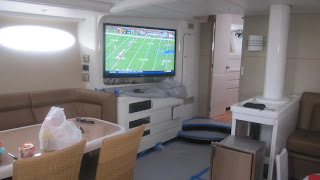 This is Joe's newest baby, thanks for the digital airwaves. He's been without a television for six years, and in Puerta Villarta he'd have to watch games in the bars for three hours while ordering their beer, which he said got to be hard on the body. The TV is mounted so it can be swung out and visible to everyone in the seating area. That white thing that looks like a woodstove to me is actually the mast. 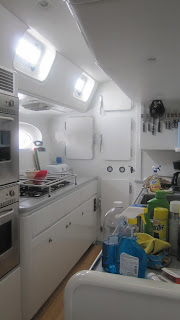 This is Lori's galley and when the owner is on board and the ship is crewed for sailing, she has to cook for ten. There's a grid over the stove top, if you see it. The stove on their own boat, Dos Amantes, is on a gimble, so cooking when the craft is pitching and yawing doesn't send pans to the floor. This stove has a grid that lowers over the stove top to keep the cookery in place, if they fit. I can see why she's taken so long to buy pots and pans. I enjoyed chatting with her over her rough menus and how she will provision before she they sail on November 12th.

The ship just got a new owner who retained Joe as captain. They were getting the ship ready to be weighed for handicapping so everything was in disarray. Lori begged me to make that statement. She said it would literally be ship-shape otherwise. They were offloading everything and staying in a hotel until after the measurements were completed - sheets, clothes, deodorants, etc. Joe was exhausted and wanted nothing more to watch football. I left Ian with him in front of the simulated-3D TV football game with their special glasses while Lori and I went to Mission Valley to buy pots and pans. 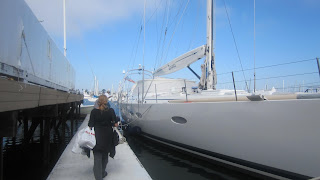 Lori is a fabulous cook, published cookbook author and a huge influence on me. She had done a lot of research on the cookery she needed and it was just a coincidence that we happened to come the day she was ready to make her purchases. We had so much fun spending $1300 of the owner's money. I think Lori is the only person I know who laughs as loud as I do. (I embarrass myself in theaters.) Parking is a problem in a marina and cookery is heavy. The guys met us at the gate and we schlepped it all in. 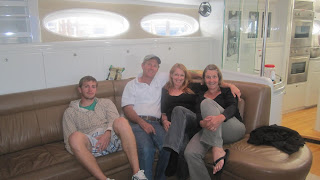 Ian took this picture for me. I swear they haven't aged at all, except for Jake since he wasn't born when I met them. He was sick and had a Coast Guard physical the next day. He's also a licensed captain so I know we're all crossing our fingers. 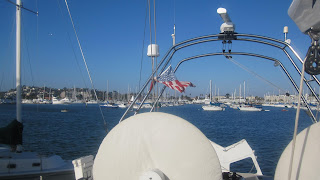 Lori pointed out the "commuters." There's a dory being rowed to dock on the left and near right, there's a red dingy doing some sort of personal delivery. It's quaint in the sunshine but I can't imagine it having the same allure in fog or rain. Hmm, I guess I sound like a desert rat.

Ian and I finished the afternoon with a lovely quiet visit with Carlos and Kristie. The next morning we crawled out of bed early, drove in the fog to return our car rental and then were delayed by said fog for another couple hours. I only took one book and no Kindle. I figured we'd only be in the air a couple of hours, so I snagged the newest Chris Bohjalian book, The Night Strangers. It was in the last Random House box of books and Amazon was giving it 4 1/2 stars. I had started it and he really does write well.

I gave it a review of two stars when I got home - what a disappointing read to be stuck with in the airport. I wasn't about to buy another book since it could be just as bad, so I finished mine. Nothing happened until I finished the first half of the book and then it was just weird. On a happier note, we can now check out books from the library on our Kindles. I checked out my first one this morning - it was easy, even for me.
Posted by Sharon at 7:42 PM

Yeah for libraries! What a great time visiting the boats and the harbour.

Loved reading about your trip!

What a boat!!!!
What a visit. Great pics and sounds like so much dang fun. Sorry about the book, but thanks for the Kindle and libraries update.

My parents had sailboats when I was in High school and later. I got sick standing on the dock, so didn't sail very often, but I loved how cozy the cabin was (they were 24' long).

Looks like you had lovely weather for your explorations!!

This is really neat! I love how compact and clever everything is.

I love the you can read books on your Kindle through the library. I need to get back on the public library bandwagon! I was so frustrated when I moved to Chicago, since the system was light years behind what I was used to in Madison and Minneapolis.