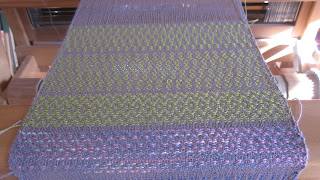 I got caught up in the holiday frenzy about a week before Thanksgiving, which was exacerbated by the CERT training, a couple of Christmas parties, making soap and just generally making myself busy. Today I got to go play on the loom. 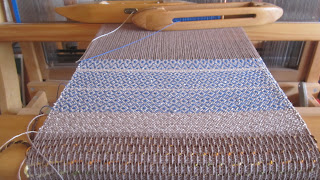 The tie-up is twill and I had finished the exercises from the workshop and had gone back to play with overshot patterns. I wanted to become more comfortable with a two shuttle weave. 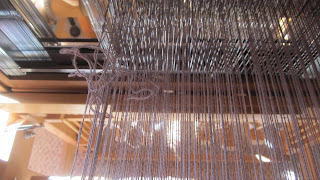 I walked around to the back of the loom to see how much warp I had left to play with and was greeted by this. No weaver wants to see a rats nest like this! It turned out to be the thread just inside the floating selvedge so I just dropped it. It's a sampler, and after all, this is just play. 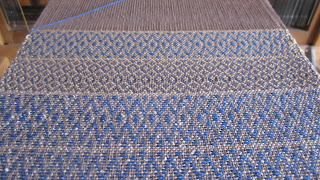 I don't want to bore you with all my samples, but I do love this picture. That strip that appears to be navy blue is actually the same blue as the samples on either side, but because I had paired it with yellow in a polychrome weave, it fools your eye. Isn't that fantastic?!! 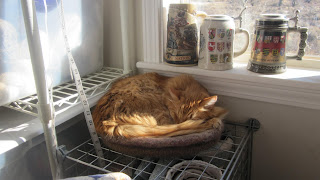 All my work was done under careful snoopervision. 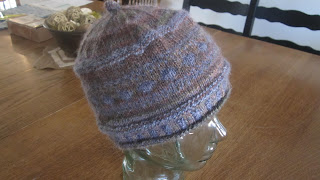 This is the final hat for 2011. I just delivered a couple to the Coop and another one that was commissioned. I'll start up again next year for the holiday craft season. I learned that I need more than 2 ounces of Shetland to make the body of a hat. This hat is cobbled together from two of my sheep dyed in the same dyes. When I first started spinning, I remember asking how much wool it would take to spin yarn for a sweater, and I'd always get the answer - it depends. It takes about an ounce more of Shetland than it does of Targhee for one hat. This I know.

My soap is doing well and keeping me quite busy. Unfortunately it's not a craft that I can enjoy while watching the television. Which reminds me - it's been two weeks now since we've disconnected the satellite. My, what a learning curve that has been, and oh my, how obnoxious are the laugh tracks of broadcast television. The HD antennae gives us free access to a lot of programs that we used to tape on the DVR, but now being cheap, we have to inconvenience ourselves to watch in real time. We used to spend a thousand dollars a year to watch convenient TV. We're in retraining.
Posted by Sharon at 8:50 PM

The weaving looks great! and I love the hat. I really love that hat.

Have a nice time.

You deserve a play day! The weaving looks good. I love weaving with two shuttles....there's a sort of dance to it. Many of my weaver friends do not agree.

At first glance, I thought the picture of Charlie was a picture of a pie!!

Curious how the laugh tracks change from satellite to your hd antennae? Why would that make a difference?

Awesome samples! How nice to have a day to just play. I love the cobbled together hat too. We just have a plain old antennae. We only get 1 t.v channel regularly, although once in a while we can get up to 2 more, with sporadic reception. We've discovered after a night in a hotel with a gazillion t.v channels, that there isn't anything we really care about watching. We don't mind not having it in the house.

Ray and I have never signed up cable. The kids didn't like it when they were little but adjusted. Now, we enjoy Netflix. It is reasonable for just the streaming and they have a pretty good selection. Free TV where we are just doesn't get decent reception. I love the sampler!!

I wonder why it take more Shetland than Targhee to make the hat? Because Shetland is finer? Interesting...

Don't you just love putting a play warp on and just seeing how many patterns you can get out of it? That looks like tons of fun.