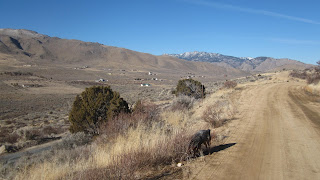 Buster and I went for a walk yesterday afternoon. It's such unusually beautiful weather and a shame to waste. We went north since the previous walk past the wolves spooked me. I'm sure their holding pen is secure but the male wanted to eat us both, and boy could he leap up to demonstrate his desires. 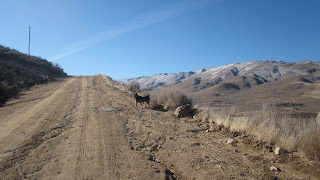 It doesn't look like a storm on the horizon or even in the thought of the horizon. I just wanted to show what rain does here and why we prefer snow, which sits and sinks. 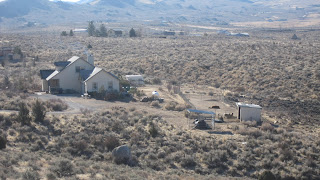 I thought you'd like to see our place on the last day of January. It could be September. Notice the red lump in the pen. That's our llama. She is not dead, that's just the way she sleeps 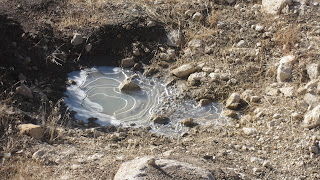 It doesn't feel like Septem-
ber. It's cold and even in the afternoon, this little collection pond still has ice. I think it was 37 when Buster and I left the house, but with no wind, it was really quite nice. 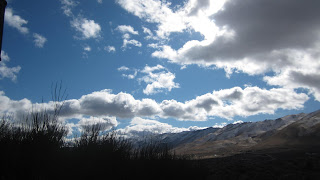 I sleep like a log, but Ian is an early morning man. He said the wind came through here and when he finally got up, huge snow flakes were falling. He estimates that we got an inch in about 40 minutes. I awoke to Narnia, but out came the sun and wiped out all the rain/snow and the itsy bitsy spider climbed up the spout again. That's the way we like our snow. It's not the first day of February that we had expected, but under the circumstances, I'll take it. 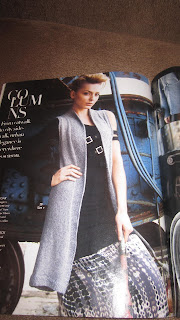 This is the pattern I've chosen for my newest project. 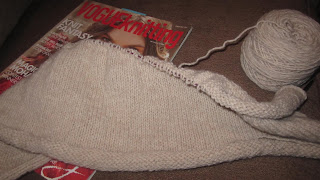 It's underway from recycled yarn. This is a three-ply Merino, which in it's previous life received a blue ribbon from Judith MacKenzie at Black Sheep Gathering. I only wore the sweater a couple of times. It looked like a knitted sweatshirt. 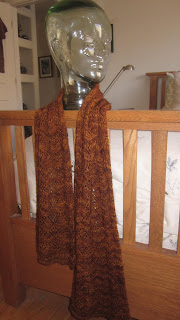 I finished that scarf from Madeline Tosh Light and it's fabulous. I love the pattern, I love the soft yarn and I love color gradations. Yea me! 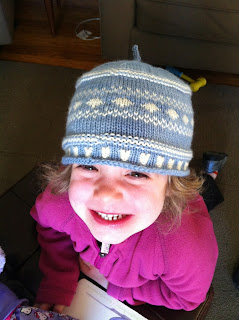 And McKay loves her new hat, which makes me happy too.
Posted by Sharon at 9:22 PM

It appears that most of us are having a very unusual winter for our locales. I'm not complaining, since I haven't had to run the snowblower yet.

So nice of the parents to send a photo of McKay in the hat. I've made the decision to not knit for future grandnieces/nephews. Not one has sent me a photo over the years and I don't want to be talked about as the "crazy aunt who sent handknit baby sweaters"...so I'm done with that.

Oh the hat is wonderful. Love the flat llama. I have flat horses just like that most days...;)
Looks like a great walk with Buster and no doubt he got to leave his share of messages to all who pass!
Isn't that Madelintosh yarn just the bomb? Looks beautiful in that scarf for sure.

I love her hat too!!!! I must have one sometime, but maybe in warm browns and beiges. Hint Hint

McKay is adorable!! And the hat is perfect for her.

Are you going to make your vest/coat as long as in the picture?