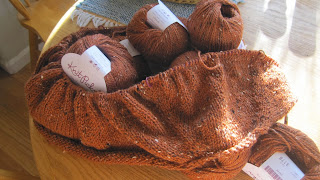 I was delighted with the Knit Picks yarn I ordered.  I was chemically befogged when I ordered it and chose the only color they had on sale in City Tweed, a Merino and alpaca blend.  I expected it to be ugly since it was marked $2.99 when the rest were $4.99 a skein.  It's gorgeous - not ugly at all.  Nothing else is on sale right now so I may have to order full price in a couple months.

I had three visits in town last week - my GP, my neurosurgeon's office and my eye doctor.  My GP assumes the culprit behind the black-out was the blood pressure medicine.  I'm to manage my BP with diet and exercise, and with the little bit of weight I've lost since the accident, it's starting to come into line.  Time is passing slowly; the surgery will be three weeks ago on Wednesday night.

It was coincidentally my annual eye exam and I didn't want to put it off since my vision has changed since the fall.  I can't see out of the right eye using my eye glasses and I use them to drive at night.  For daytime I wear a distance contact lens in my right eye and he kept asking me if I were wearing one for the exam.  It appears that my fall knocked the conical shape out of my right eye and I can see distance without correction.  He doesn't want me to wear a close-up lens in the left eye while I'm healing so we stopped at Costco and I bought a three-pack of readers.  I have reading glasses everywhere! 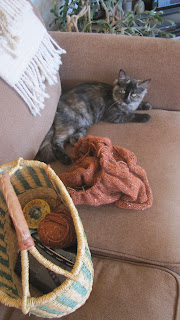 In addition to their distinctive coloring, torties also have a reputation for unique personalities, sometimes referred to as “tortitude.”  They tend to be strong-willed, a bit hot-tempered, and they can be very possessive of their human.  Other words used to describe torties are fiercely independent, feisty and unpredictable.  They’re usually very talkative and make their presence and needs known with anything from a hiss to a meow to a strong purr.

The dogs still don't know what to do with her, but I'm thrilled to have her presence.  She sleeps with me on the recliner every night.  All I have to do is put my hand on her and she resumes purring. 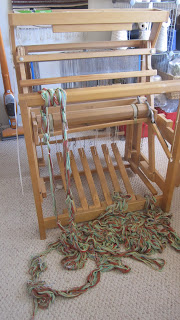 I didn't think about the studio right away, until I realized that she was making herself quite at home in there.  I'm going up and down the stairs comfortably these days but in the beginning I wasn't willing to try them without Ian on the downhill side.  She pulled the warp off Maudie Mae in no time at all.  It's going to be an easy repair, but for now I've closed the door. 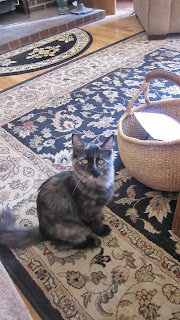 So glad to hear you're improving everyday.....and have better eyesight to boot!

Oh that Maddie! The loom room is going to be a challenge for her......to keep her paws to herself!

Sharon, I was stunned to hear of your fall and subsequent neck surgery. Wow, scary. So glad you are on the mend.

All that dangling string - how could she resist?

Glad to hear you are doing better.

Glad you are feeling better.

Ah yes, torties. Ours was named Calliope, but nicknamed "She Who Hates All Things". She picked my youngest as her human, and was so mad when he went off to college that she body slammed me every night for 8 months when we went to bed. We lost her last winter (at the ripe old age of 16), and she has left a big hole around here.

I'm glad you have a furry pal to help you heal - that purring is on a special frequency the promotes healing - just google purring and healing! Many wishes for a speedy & full recovery. T.

My little sugar is a dilute tortie, and she has oodles of tortitude! She is a complete and total snuggler and lover, and she has already converted a couple of our cat-hating friends into fans.