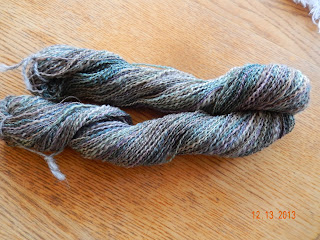 I spun half of my roving for what I thought would be lace weight and then plied it with a 60/2 silk.  It's much to fine to be much use and I'm disappointed with my first spinning effort in six months.  The second half I'm make fluffy!  The colors are pretty so maybe I'll be able to weave with it.  It's just that I'm able to knit much more than I'm able to weave at this point. 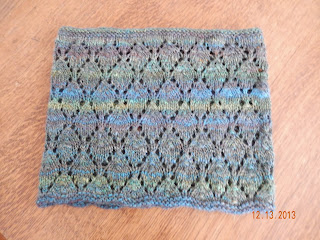 This is the second cowl from my handspun yarn and I made it deeper by an extra pattern.  I really like the extra width as it's warm and that's the point.  I have two and wear them constantly to keep my scrawny neck warm. 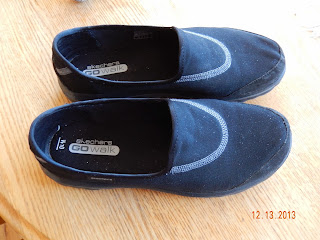 And speaking of comfort, I stumbled onto these completely by accident.  They're called GoWalks and are made by Skechers.  The insole is memory foam and the outer part is very much like a tai chi shoe.  They're advertised for walking but I wear them in the house from the time I get up to the time I go to bed. 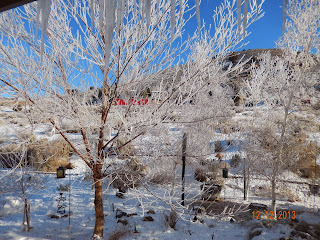 I love my shoes for their comfort and warmth.  It's been probably three weeks since we've had temperatures above freezing and many nights have been below zero.  It's been hard on Ian, trying to keep up with everything outside and then take care of the things I'm still not ready for, like driving, laundry, cleaning and cooking though I'm doing more all the time.

This is the "pogonip" we had on Friday, which is freezing fog.  It made for a miserable drive into physical therapy with visibility less than a quarter mile. 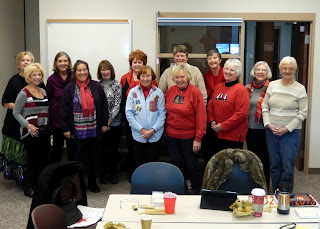 Ian drove in on Tuesday to the Tuesday Book Club.  I've cancelled just about everything but I couldn't bear to miss this.  We re-read The Guernsey Literary and Potato Peel Pie Society for our December book which was even better the second time.  Of course we outdid ourselves with a potluck but this year we played the traditional white elephant game, only with books.  Everyone brought a book wrapped up, we drew numbers and the swapping began in earnest.  They don't want to wait a whole year to do this again so we're talking about maybe a half-Christmas in June.  Why not??

We had to go back in to town on Wednesday to see an ENT about my nose.  My physical therapist encouraged me to get it looked at before the end of the year.  If I talk very much, it closes up and it's hard to understand what I'm saying.  The short of it is that on December 30th Dr Zamboni, that's right, just like the ice machine, is going to fix my broken nose. This means we had to cancel our New Years trip to SoCal.  Alexia is very disappointed as are we, but I am looking forward to normal breathing once again. 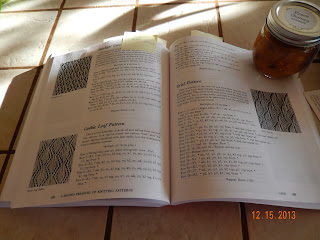 I've had a couple balls of Classic Yarns Cashsoft for many years but haven't found a scarf pattern that I've liked.  Last week I asked on Facebook is anyone had a favorite scarf pattern.  Sara Lamb, who lives near here, suggested I use one of Barbara Walker's pattern treasuries and make up my own pattern, such as Tilting Block on p.263 of the second treasury.  I don't own any of Walker's books so ordered it from Amazon and it was here by Friday.  This is what the patterns look like and they are murder to read.  The only one I could do was Tilting Block.  But I wanted to make up my own which meant I ended up knitting swatches for hours!  I tried several  but finally decided to go with Gothic Leaf Pattern on p.288.  The book is huge. 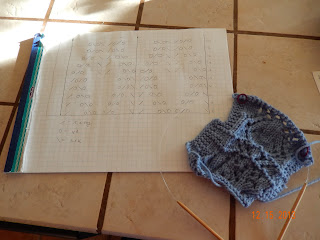 I couldn't make sense of the written pattern at all.  Stitches sporadically appear before and after the designated pattern stitches so I finally wrote it out on graph paper.  The first graph I wrote out was just for a single pattern but I still didn't know what to do with the extraneous stitches so wrote it out as a double pattern.  From that I was able to knit my swatch from scrap yarn.

I can see that there isn't going to be any spontaneous lace knitting going on here. Every pattern will require deliberate graphing so I will probably end up with just a few favorites.  There are three volumes in the Barbara Walker treasuries but I think I have my hands full with just one.  At least it will be my pattern and my scarf with I'm finished.
Posted by Sharon at 4:54 PM

You can graph it on excel, too. I used that alot before I bought a knitting pattern program. Then you can print it out - if you convert either of them to pdf, you can actually blow up sections so they're big. In excel, I used 2.11 for rows/cells (high and wide), and they print out at roughly 1/4" square - perfect for my aging eyes!!

I love Barbara Walker's books, and I had the same problem. I typed them out on my computer, using a different font, sometimes bold, sometimes italicized, for each line, then printed it out in a font size that was comfortable to see without my glasses ( I like to knit with bare naked eyes in the morning!). It worked really well for me. And I think a sampler square helps a lot to get in the rhythm. Too bad I hate to spin, because knitting lace with your own yarn is going to be wonderful!

I have the Walker books too, and I agree that the patterns can be an issue. I'm usually playing with them for socks, so I end up having to chart them & figure out how to do them in the round too. Worth the effort (usually!).

Love your handspun. Hope you find what it wants to be.

I am sorry about you having to cancel your trip, but you are right, being able to breathe is very important.

The pattern on the cowl is lovely. Nice stitch definition!!

If I don't talk to you before hand, have a very Merry Christmas!!