Trying to Keep Up with Summer 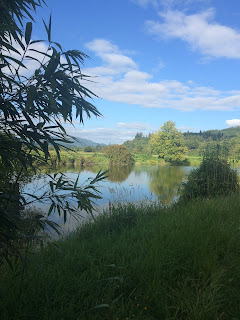 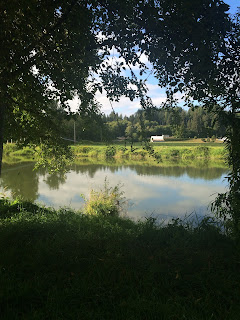 I took some pictures of Grays River with afternoon light.  When Bob and Georg bought this old farm house there was very little on the property, other than the house, some outbuildings and pasture grass.  Bob planted everything and boy has it grown. 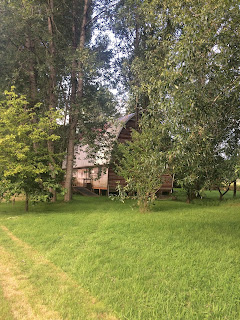 The historic barn is surrounded by Bob's trees and it's startling to realize he planted every single one of them.  We picked figs and pears to bring home.  Apples are coming in next month.  I know he didn't pay for a single tree.  He took pride in his ability to barter for things. 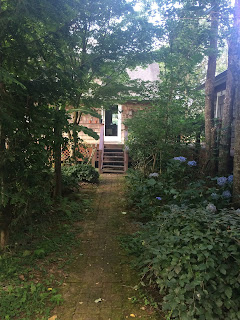 One year we rolled in for a visit and we were no sooner out of the car when he excitedly said, "Come look at my trees."  He had planted the poplars then decided he could double his trees by cutting them in half the sticking the top into the soil.  The water table is that high.  Those trees are 100' tall now! 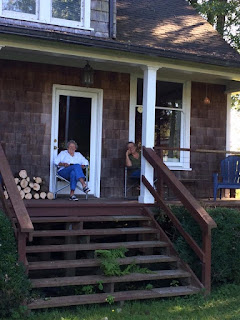 It's truly a park setting.  Georg ran the B&B, renting to former clients until just recently.  She and I sat on the front porch reading and chatting and this is what my kind of vacation looks like. 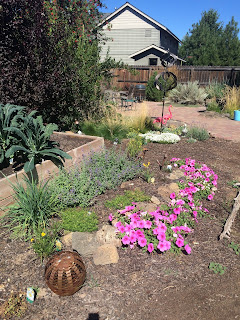 Everything I know about gardening, pruning and placing plants I learned from my brother.  After being inspired by his yard, we came home to our own.  I'm still trying to groom some areas with perennials so they'll be ready for spring growth.  This is the first time I've ever planted petunias because we don't have rabbits to eat them up overnight. I know the petunias won't winter over but a flat of them was $10 at Costco and well worth it.  This area is the north end of our yard and was completely filled with tall native grasses which had to be pulled, one clump at a time.  We couldn't do anything until the grass was gone which is why my plants went in so late. 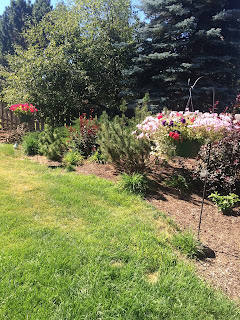 This area is west of the house.  I've cut back three over-sized sand cherry shrubs and removed three dead ones.  Two mugo pines that were crushed by the overgrown plants have responded to being staked upright and are thriving.  I planted a half dozen day lilies and hung flower baskets which are huge here.  Instant garden! 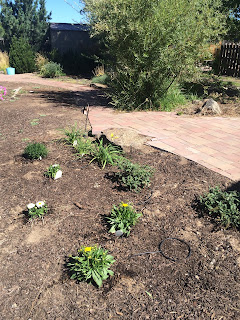 Ian worked very hard to remove every trace of the Frankenplant so there was nothing here.  I just finished planting it this morning.  The plants should winter over well and should start to fill out next spring.  I'll add some annuals then so it doesn't look so raw.  For now we'll just spread mulch over the rest of the yard to keep the mud down.  It's $15 for a yard and our truck holds half a yard.  It looks tons better than it did.  I have the fun of planting these but we've spent $500 back here and it's time to stop for this year. 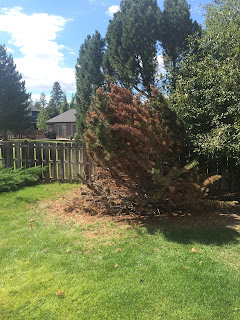 Ian has the unenviable job of removing this dying Mugo pine.  He took a second load of branches to the dump this morning.  It appeared to be a beautiful bushy tree when we moved in last year. 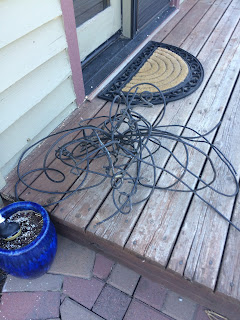 At some point the tree became unstable and started to tip over but rather than stake it, a previous owner wrapped all the limbs with this black wire.  It didn't prevent the tree from tipping over and in fact, the main trunk was flat on the ground with the branches growing vertically making the appearance of a tree.  By this spring the wire had cut into the branches and was choking it to death. 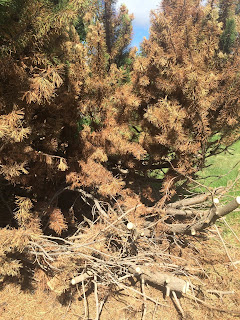 That stump on the bottom right was the main branch.  What a bizarre thing to do to a tree. 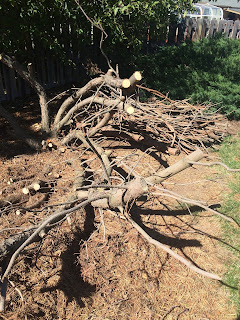 That's the bones of the tree, soon to be firewood. 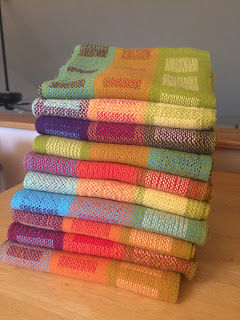 These are the towels I finished before we left.  I put them on Facebook yesterday and two are sold.  I'll open them up and display them better and see if I can tempt a few more buyers.

There is nothing so inspiring as someone's mature garden. Lovely towels!

a link to the FB page for towels would be welcomed.

I love it! This year has been so odd for us, gardening-wise. We had late frosts and cold weather then went straight into HOT and miserable. Now, it's moisture but starting to cool off at night.
The trees have done well, but the garden only has a few potato plants, two volunteer summer squash and a few pumpkin plants Ralph planted are finally growing. We lost the chard, carrots and the raspberries were pitiful this year.
Sigh.
We need to come look in OR methinks. ;)