It's a Fiber World after All. 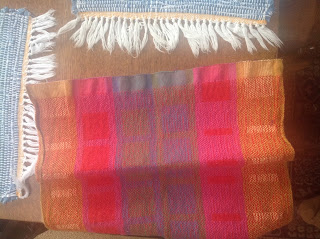 I keep meaning to update on my experiment with sewing thread for weft.  Since it's so thin I didn't think polyester thread would matter but it does.  The hem is rippled and when my weave/study group suggested I use a basting thread to draw it up, then pin and steam it, 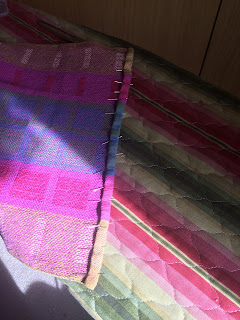 I did.  It was still pretty puckered but after another wash and dry and steam press, it's not bad.  Another time I'll weave 1 1/2" and use cotton sewing thread for the hem but otherwise I'm pleased. 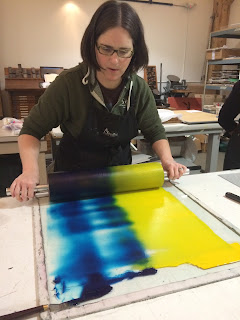 My second monotype class was Monday night and Julie started by demonstrating how to roll multiple colors on one plate at a time. 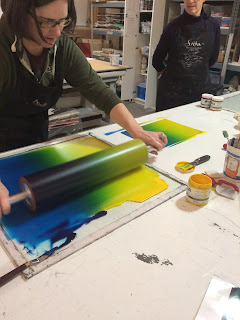 You can how it works on the inked plate to her left.  Our instructions were on how to use found materials to create pattern.  It's nice to have three others in the class because we learn from each other.  The first week we used the reduction approach, the second week was the additive approach, and this coming class we'll combine it all together.  I forgot to take pictures of our completed projects but I found it much more time consuming and frustrating.  Anything laid on top produces white space on the print, unless you ink it which is tedious.  For instance on my first print I inked the plate with burnt sienna and scattered leaves on top which produced a burnt sierra print with white leaves all over - not interesting! 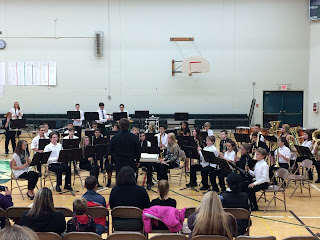 The next night we met up with son Josh and DIL Missy for Evan's fall band concert.  Sitting on those hard backless bleacher seats is not for the faint of heart!  Nevertheless, I was grinning half the time and smiling the rest.  This is the intermediate band and to the left of them is seated the intermediate orchestra.  Next up were the advanced band and orchestra- so many kids in music and so many musical instruments!

Wednesday was our guild holiday meeting /party and now we won't meet again until January.  We pack so much into three hours, overindulging ourselves since we won't see it each now for two months.  I sat with Lindsey who just moved here last February and started taking weaving lessons from Patty Huffer.  I had met her at the double-weave workshop that Patty taught, so she in turn introduced me to Bobby, who was a brand new member, had just joined that day.  In the course of conversation I realized that Bobby was the woman who came my table at our show-and-sale and said she had just finished weaving a set of towels from my pattern.  We laughed about that and then she whipped out her phone to show them to me.  Beautiful!! 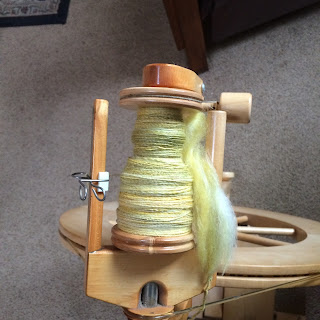 After a long spinning drought, I have finally pulled out my wheel and I'm back at it.  I realized that the five scarves I sold were all with my handspun yarn as warp.  I had forgotten how enjoyable it is to spin with my cup of coffee in the morning, certainly more pleasurable than reading Facebook.

Thursday evenings I "sit the store" which what I call my volunteer position of "ambassador" at the A6 gallery.  But it's more than just tending the store, you need to be prepared to answer questions and show visitors around, answer the phone and ring up sales including credit card sales, which is a first for me.  Last night was super busy.  There was a large origami class in session when I got there at 3:00.  We cleaned up just as the evening's OSU college students started to trickle in to get an early start.

Somewhere between then and 4:00 when the lecture started a woman popped in to drop something off for the fundraiser auction next week.  She introduced herself to me explaining that she's on the board, so I said - oh, are you a printmaker?  She's a potter who fell in love with prints.  I told her that I'm a weaver who has fallen in love with prints.  Do you spin? she asked.  We had an interesting exchange about spinning as she's a former spinner who stopped, lost interest and got rid of her wheel.  But she wants to spin again and someone has loaned her a wheel which she can't get to work.  The short of it is that she's going to bring it in to the studio in two weeks when I'm there again and I'll bring oil and fiber.  I'm not an adept wheel mechanic so I hope I can get her up and running.  What a coincidence!

You meet fiber folks when you least expect it sometimes...isn't it fun! Glad to hear you have your wheel out again.