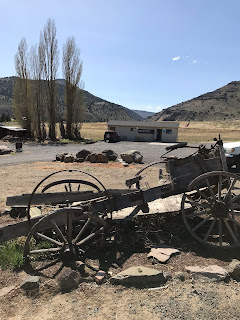 We drove for an hour after lunch to Warner Valley which is east of Lakeview.  The road meanders along Camas Creek through that notch behind the Post Office and is the same Hwy 140 that goes through Klamath Falls, hard to believe. 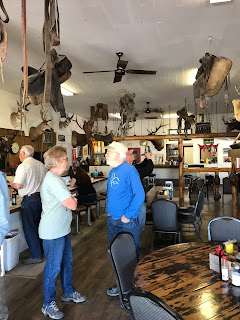 We gassed up at the Adel Store established 1898 and bought snacks.  A cowboy saundered over to our group and asked if we were interested in taking a look at the BLM Mustang facility about a mile away. 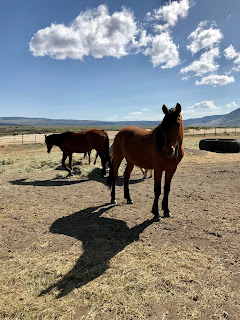 Why not?!  We were already a couple hours off schedule.  This is Beaty Butte Wild Horse  - click on the link for more information on their rehabilitation and adoption of mustangs to keep them out of slaughterhouses.  It was well worth the time we took. 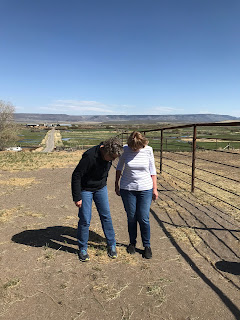 Ian was taking a picture of Joanie and me when we realized we were standing in horse manure. 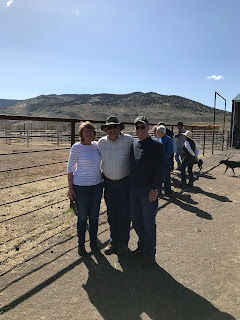 This is our friends Joanie and David with Ian.  It's a good thing we met them because they invite us to do fun stuff all the time, like this trip! 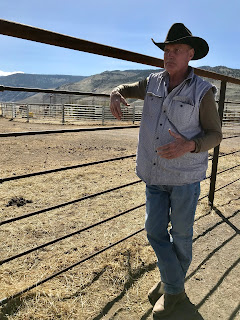 It turns out that the cowboy who is invited us to visit this rescue operation is Ken Kestner, Lake County Commissioner.  He told us that the county, the largest in Oregon, has a population of about 8,000 and he is one of three commissioners though there are supposed to be four. That means the safety of petroglyphs as well as the Summer Lake Wildlife Area, which has been in the news lately for their work in bringing trumpeter swans back from near extinction - all are in his territory.

He explained the process in rehabilitating the horses, something he is clearly passionate about.  Andries gave him his card and told him to shoot him an email next time they have an adoption and he'll help publicize it. 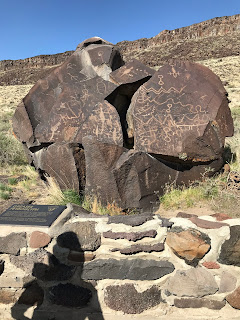 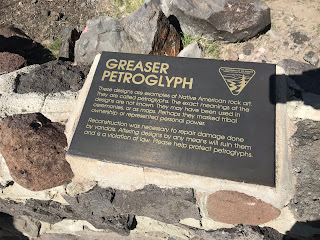 The Greaser Petroglyph was our last stop of the day. 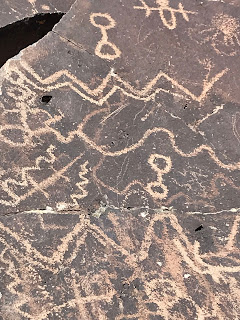 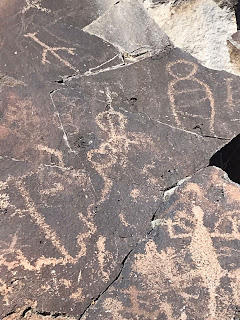 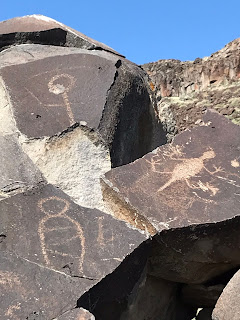 The separate piece on the right with the fat lizard was vandalized, then later recovered and placed approximately in the sport where it had been removed from.  These were the best yet, and there are many more sites if we decide on another trip.  Al was making a list for "next time" as we drove back.

It would probably have been 30 minutes shorter had we just gone back the way we came but we voted to go north along Lake Abert, an inland sea remnant, and through Christmas Valley and Fort Rock, home to the largest homesteader museum.  None of us had been there before and I knew Ian and I wouldn't go there on our own. We had left at 8:00 and didn't get back until after 9:00, and though we were exhausted, we were exhilarated.

Thank you for posting about the wild horse adoption program. I have four horses, three from Nevada and one from California, that I adopted. I ride them, drive them to carriages and use them as a pack string. They're awesome animals and I wish more people would adopt instead of breeding.