Meanwhile, back at the ranch....

My daughter and her family including grandson Kiernan drove up from Reno the day after we got back from our trip to retrieve Alexia.  We enjoyed several days with them and then they hit the road, to be back to Reno on Monday.  Alexia had an orientation to attend.  Nevada has a program called Nevada Youth Legislator where high school students can apply to the state senator in their district for this position.  There are 21 state senators so 21 high school students, most of them in the south where the population is.  She still isn't clear on their mission but it is going to be a great learning opportunity regardless.

She applied to Senator Heidi Gansert's office and was accepted.  A term is for two years and next year the Reno kids will fly to Las Vegas for the orientation since they came up this year.  She even has her own business card! 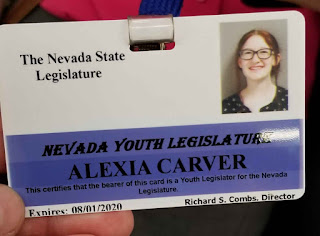 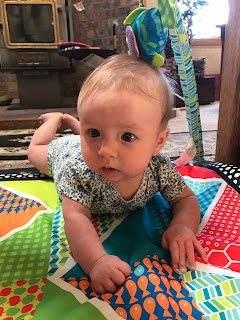 It's back to babysitting on Thursdays and Fridays for me.  Delaney is now four months old and can roll over! 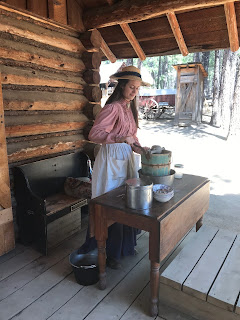 Meanwhile, back at the ranch - the living history department bought a hand crank ice cream maker on eBay. 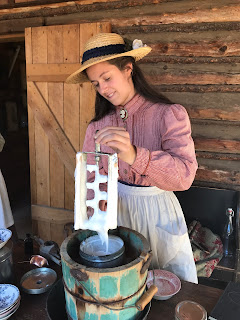 It's been a huge hit with the kids.  They line up to take turns cranking and then go to the end of the line so they can do it again, even though they know we're unable to give them any of it. 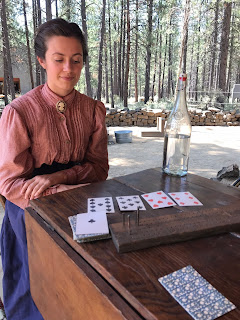 But the past two weeks have been too hot to do much of anything, too hot to bake, and too hot to make ice cream, so we've been playing cribbage.  Izzie taught me last week.  Her grandmother taught her when she was seven and now she's taught us.  Yesterday we played a tournament and surprisingly it was a big hit with the public.  Many adults have played it and the kids love helping us add up the cards - 15-2, 15-4.  It's not as easy as it looks as these reproduction cards only have the spots, no numbers.  It's gets confusing after a while. 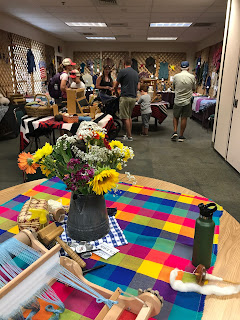 Our county fair was just a couple of weeks ago and my demonstration shift was the first morning it opened.  In spite of the air conditioner not working in our room, we still had very good turnout. 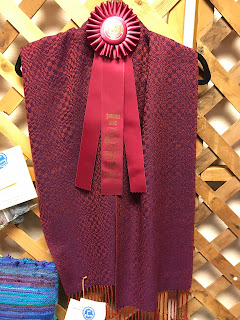 My scarf took the Superintendents Award.  I don't know what that means or who the superintendents are, but that's a mighty big ribbon.  It's headed to the State fair tomorrow. 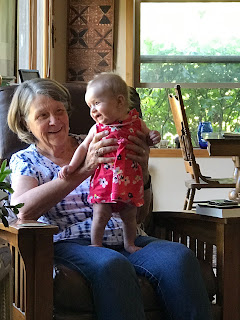 And I settle back into my routine, enjoying the last days of summer.
Posted by Sharon at 4:43 PM

Oh, that means I'll get to see your scarf!!!

You’ve had a great summer, full of talent and love.

Congrats for the scarf win! That is awesome. We make ice cream at the village where I work and we are able to give the visitors samples. It is always a huge hit with the visitors. And so yummy!

The last picture of you and your babysitting charge is just precious !!!