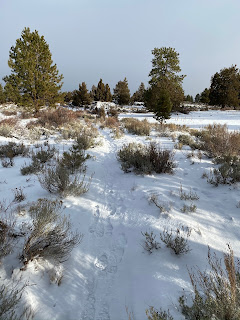 This is what the field behind our house looks like on my morning walks.  We have had some rain so there's some melting but also freezing so YakTrax are absolutely necessary.  It's still better than going to a gym and walking on a treadmill.  Weather is uneven in Central Oregon.  The elevation is higher at the southern end and gets lower as it ends in the Columbia River.  Often we'll have snow but Matt and Julia in Redmond 30 minutes north of us will get none. 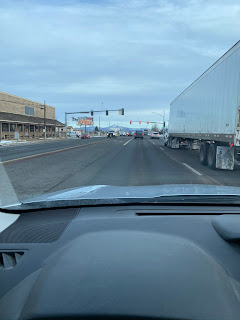 And indeed this is what it looked like in Redmond when I drove up last week to our guild meeting, and my first meeting as guild president. To say I found being president a bit daunting would be an understatement.  Yesterday was my first Board meeting which required me to collect agenda items and prepare an agenda.  It's a big board and several people congratulated me for reining in the meeting at two hours.  I was appalled that it went so long and they were thrilled that it didn't go longer.  I have a lot to learn. I stopped into our LYS for some fiber therapy on my way home.  I had sold a shuttle for $50 which was burning a hole in my pocket.  This is Malabrigos Rios and it is $16 well spent.  It's already on needles to be another Honey Cowl. 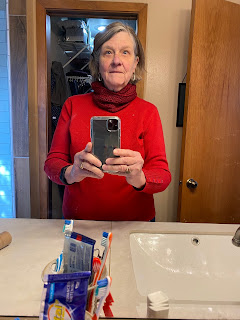 This is my first Honey Cowl, also in Malabrigos Rios, and it's like wearing a hug around my neck.  I love it so much I knitted it in the Bergamo yarn I showed in my last post. 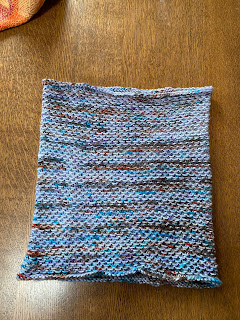 The instructions have a couple of different sizes.  My first one was knitted on 160 stitches and this one on 110 stitches.  The difference is this scrunches up like a turtleneck and the other one wraps twice. 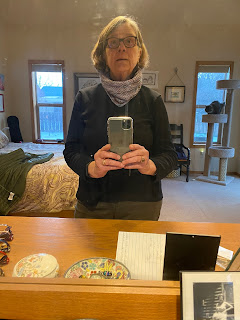 I wore it all day yesterday.  My friend Herme just told me that she has converted a couple of scarves into cowls following Sarah Jackson's advice - simply sew the ends together but twist it once to make a mobius.  Hermi had a neck injury long before I did and she always wears something warm around her neck.  I've identified two scarves for starters so I can give my few cowls a needed break. 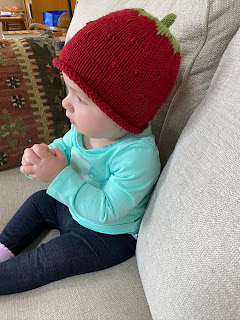 I know I'm doing a lot of knitting lately, but there's just not much natural light this time of year and knitting doesn't need it.  I have been meticulous about using my SAD light each morning, and after fits and starts in the beginning, I even get up early to allow that 30 minutes if I have to leave for a morning meeting.  I finished this hat for Delaney from leftover Cascade 220 that I've had for years.  I didn't realize how much damage the moths had done when we lived in Reno.  There are a lot of Russian joins in this hat - good practice! 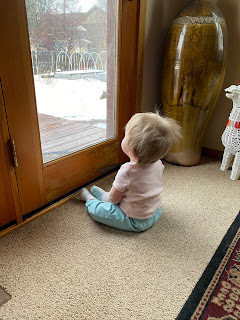 Delaney loves to watch the birds at the feeders.  I took this picture two weeks ago but she's starting to crawl now and I'm not sure she'll continue to be this content and quiet again. 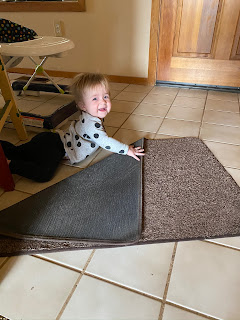 She's napping now which is why I have a minute to write this post.  She played with this rug for 15-20 minutes this morning and I was thrilled because it's safe and I didn't have to worry about what she was getting into.  It's just beginning :-)
Posted by Sharon at 2:31 PM

I love this post – your knitting, your active life and taking on new challenges, Delaney looking out the door. Sure wish you were closer, friend; I would love walking or just hanging out with you!

Delaney is pretty adorable! And that hat on her is so cute!