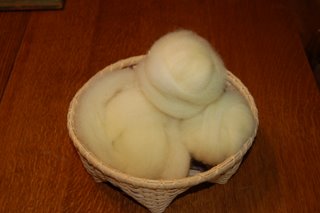 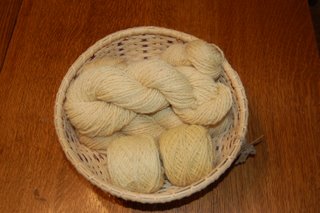 About six years ago I got it in my head that I wanted to dye with native plants. It was September and the hills were golden with rabbit brush in bloom. I drove my car up the hill behind us to an area that seemed especially colorful and began cutting and bagging. Our guild’s annual retreat, two days of camping in the group area at our country campground, was the following weekend so for extra measure, I also bagged some Mormon Tea. I dragged all of it and a couple of five galloon buckets down to the campground on Saturday. I had to work the next day so couldn’t spend the night but thought one day would be enough time for this experiment.

I had no idea about mordant, but Laura Cunningham loved to dye things and overdye them too, and was bringing all of her pots, burners and dye supplies. We mordanted in the dye bath so only used one pot. I had two pounds of border that I wanted to dye, and I put the first pound in the rabbit brush dye. At the end of the hour, the bath was nearly exhausted so we weighed out the Mormon Tea and added it to the pot. The second pound of wool went in that bath. Neither pound spent more than an hour in the dye bath. And that’s all the record keeping I did.

I brought the wool home wet and after it dried, processed it on my Patrick Greene Deb Deluxe drum carder. Neither color was very interesting and the ephedra was especially dreadful, looking like it was dyed in urine. I found it harder and harder to make me spin it, especially since the resulting yarn was so disinteresting. Over the years, skeins of this would find their way into other peoples dye pots, providing me with odd colors but very useful for knitting in hats – well, most of them. I am now down to the last couple of bumps of the rabbit brush. I’ve been working for the last couple of weeks on getting all of it spun up for a dye day on the 4th of July. What better way to spend a firecracker day?! This morning I collected two pounds of lupine blooms and stems and am stewing them on a propane burner in the yard as I write this. I will keep a record this time – more to follow.