A Much Better Natural Dye Day 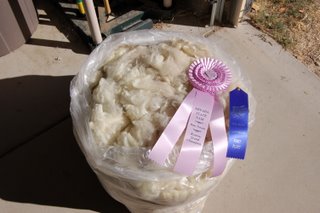 This is the fleece that won Ian the Reserve Champion ribbon at the Nevada State Fair last month. I should have sold it at the auction, because while I'm busy spinning last year's fleece, Mickey is busy growing a new one. It must be that expensive hay because they all have huge coats!

The guild meeting today was at Marilyn’s house. She announced at the meeting last month she would be having a madder dyebath and handed out instructions on how to mordant. However, when we got there today, she had decided to also make a marigold dye bath, and Nancy Pryor had decided to throw in an indigo pot. I had been spinning like mad ever since she made that announcement because I wanted to take advantage of this opportunity. I’ve never seen madder but I’ve certainly read about it’s historical importance. I have been wanting to dye with indigo so set some skeins aside this morning. To my chagrin, I outfoxed myself. 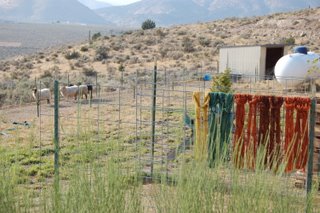 Mim came over yesterday we mordanted and visited and looked at dye charts and visited. This morning when I squeezed out the skeins I realized that my cottonwood skeins had stained everything yellow, while diminishing the yellow that I did have. I’m guessing that I didn’t need to mordant those again, but in the end, it didn’t matter – didn’t madder. That was the joke of the afternoon. And what a wonderful afternoon it was. What can you do while you wait for the dye action but visit, and we visited and visited and visited. I realized after I walked a friend to her car, that I’ve met my most cherished friends through this crazy spinning world of fiber. 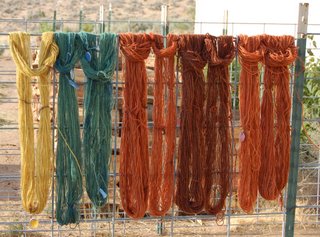 I want to make felted bags so these skeins are either Border Leicester or Romney, which have felted well for me already. Starting from the left are marigold, indigo over cottonwood yellow and the remaining six are madder, the outer two were yellow to start with, the center two are overdyed gray and the other two slightly yellowed white. I still have a skein of the bright cottonwood yellow, so I'm anxious to start my next felted bag. I who have carried the same purse, every season, every year, am now creating a purse wardrobe. I also wore hip-hugger bell-bottoms to the meeting today. And cut my hair. People can change. It can happen.
Posted by Sharon at 6:57 PM

Bright colors! I bet you were excited after all those yellows. These will make some wonderful bags. Did you know my birthday is one day ahead of yours? Glad you will join the birthday swap.

Wonderful colors, Sharon. Congratulations on what looks like was a great dye day.