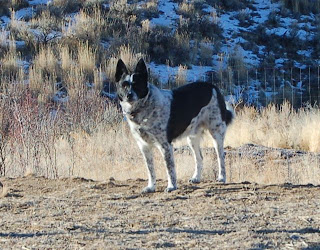 This is Eddie. He is the first dog we got after we moved out here four years ago. In town, we had three large dogs, but within six months lost them all in a short succession of deaths. Ian was reeling from the loss of his companion of 16 years, a remarkable dog that loved him unconditionally when he was drinking and no one could stand to be around him. Ian wasn’t ready for another dog he said – no one could replace Bud. And I couldn’t argue that. This was a dog who came racing through the dog door when he heard the theme song to his favorite TV show – America’s Funniest Videos then would kneel in front of the TV to watch and comment on the whole show. The other two dogs were my running partners. It’s hard to start over – dogs are family.

One day Allison called me at work and said there was a terrific dog that needed a home. She wouldn’t call if he wouldn’t something special. At first Ian balked, but co-incidentally, that issue of Black Sheep Newsletter had two articles of incidences of people losing livestock to neighbor dogs. We had purchased our llamas and were boarding them with Toni in Chilcoot until Ian finished our fence. I was nervous. Ian reconsidered and agreed to the meet this dog of Allison’s where he was being kenneled. Eddie had Ian at hello – still has him.

Eddie had wandered into the ranch where Allison boarded their horses. She and her girls loved him. He went by the name of Lucky. The name reminded me of the joke about the three-legged dog who couldn’t see out of one eye. Ian and I are big fans of the black and white photographer, Edward Weston, and decided this dog needed a black and white name, hence Eddie.

Yesterday when Allison drove down our long driveway, Eddie was waiting for her at her driver’s door. After four years, he was thrilled to see her. Different truck, different smells, but he knew her just the same. How do dogs do that?! He loved all over her, but when Ian came home it was clear to me whose dog he is. It was hard to take the first step of starting over on our dog family, but Eddie is lucky and so are we.

I'm a sucker for a good dog story -- and this was a heartwarming one.

He must be one smart, hard-working dog. So glad he came into your lives right at the moment when you needed him.