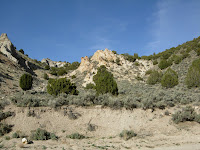 I drove in the 35 miles yesterday afternoon to pick up two of our grandkids. Mama Chris is belly dancing this weekend at a regional event, and daddy Mikeal is fencing in California. It's rare that I make our beautiful drive at my own leisure so I took my camera to catch some of the pictures that I have wanted, but never left the house in time to capture. This is right before the cattle guard and the California State line. 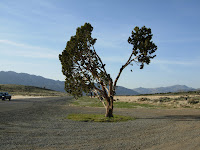 And because I wasn't in a huge hurry home, I pulled into the Shoe Tree. The kids were thrilled and asked a million bajillion questions, mostly, why do people put their shoes in the tree? 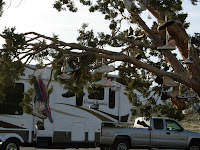 You have to click for big to see the unbelievable variety of shoes that people have taken the time to hang here. I had a pair that I was saving to hang on it, but they got disappeared. I walked all over Washington, D.C. in them, to the point that I wore through the soles. That they aren't on the Shoe Tree is only a technicality in my mind. 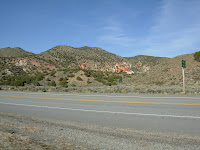 Driving north from Reno to Susanville, California, you will see a sign - oh, about 13 miles north of the Hallelujah Junction - that says Red Rock Road. We live five miles from there, but we live just inside the Nevada state line. We are in the rain shadow of the Sierra Nevada Mountains and very much in the high desert. 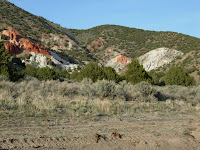 I took this after we turned onto Red Rock Road. The kids were terribly worried because I stopped right in the middle of the road and took several shots. They aren't used to rural roads. I'm on it - it's mine. Well, not my attitude, but common.

I really love your red rock pictures. The colors are begging to be in a project --somewhere -- sometime. Maybe I could start with painted roving -- hmmm.

Those two grandchildren are adorable.

I wonder what people from other cultures make of the various shoe trees in the rural countryside... now just don't show the grandkids that bar in Virginia City where other articles of clothing have been left behind:)

What cute grandchildren! Their parents must be super models!

Cute grandkids! The shoe tree is very neat. What a unique idea.

Can't wait to see how your next batch of dyeing turns out.