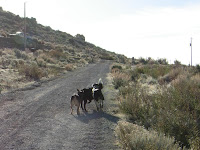 The morning walk has begun. We aren't even out of the driveway yet when our two boys are joined by their friend, Sammi. She's the new kid on the block and, while they disdain many dogs, they enjoy romping with her. 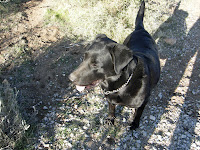 She's pretty cute and she minds, unlike the last dog those neighbors had. I am joined by several neighbor dogs when I walk, though most aren't interested or are behind fences which is a good thing. 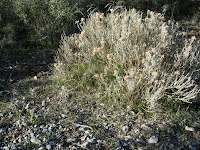 The native grasses are just beginning to green. At this stage I have a hard time telling what's "good" grass from what's cheat grass. Cheat grass earns its name. It looks like grass early on, but it isn't palatable to the cows and horses and it quickly dries up and becomes fire tinder. Everyone is cheated. Just the same, it's nice to see green. 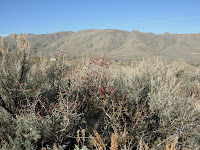 The desert peach is just getting its buds and will bloom in the next couple of weeks. Blooming seasons are short on the high desert and not easy to photograph. I hope you can see the green cast to Peterson Mountain in the background. 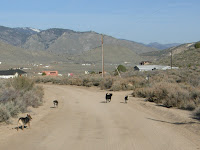 And now we are four. The dog of an elderly neighbor has joined us. The dog is elderly too. I worked hard to get four dogs in this picture. Most of the time they're in brush sniffing. They do a lot of sniffing and then they sniff each other. We ended our walk with a Western Meadowlark serenade. 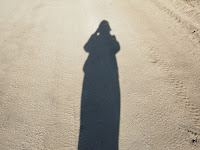 Thank you for sharing the morning walk. I particularly like the self portrait!