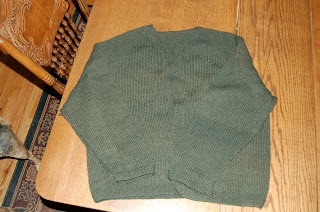 I showed Laura the sweater that I made from some yarn that we had dyed at her house when we both still lived in town, probably close to ten years ago. I knit it up in this jacket and because it was so uninteresting, I never wore it - not even once. It's lived in a drawer it's whole life.

I showed her my Sonnet sweater and told her that I had the same frustrations with it that Michelle had. It's the sweater that never stops growing. Laura started verbally redesigning and I started ripping the virgin jacket. 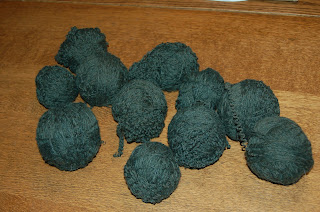 I don't want to lose this yarn. It's triple ply and it's probably Border Leicester, which was what I was spinning almost exclusively at that time. I remember that it was brown and the teal was leftover dye Laura had in a milk jug. The yarn wasn't taking up the dye, so Laura walked over with a partial bottle of vinegar and soused the dye pot. The yarn took up all the color. It's a yarn and it's a memory. 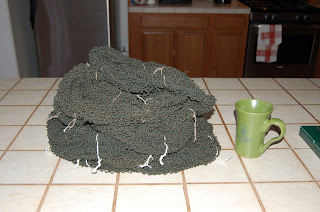 I reskeined the balls so I could wash the yarn and relax the kinks. The unfor-
tunate kink was that moths had visited the sweater and eaten through an area where it was folded. I'm going to have to weave in more ends than I had planned on. The damage was marginal, but it reminds me that I will always have to protect my yarn and fiber. 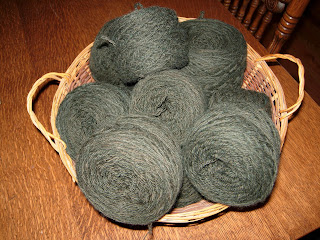 My yarn is prepared and ready to be knit - again. Laura's idea is to knit the body of the Sonnet sweater, but to make the neck smaller. I'm also going to take her suggestion and assemble the front and back, then pick up the sleeve stitches and knit them from the armholes down. My complaint with the Sonnet as written is that sleeves are huge, ginormous in fact. I think by knitting from the shoulder down I will be able to make them the size that I want - after Christmas.
Posted by Sharon at 8:59 PM

Always on about my handspun... that is gorgeous!

That yarn is lovely. I'm glad you were able to save it.

This is a timely post, because I am swatching for another Sonnet this very day. My friend wants an adult-sized cardigan to match the rose chenille BSJ I made her little daughter, and I have enough of the chenille to do it. I, too, was thinking I need to make the neck MUCH smaller, but hadn't thought about the sleeve approach. You may have to talk me through it, but it sounds like a good solution!

I would have never thought to do that. I think it's a fantastic idea. :-)

I've done the same thing only with a vest. The yarn is to precious not to "re-use". I've already bought wool sweaters at the thift store and re-used that wool. Why not?