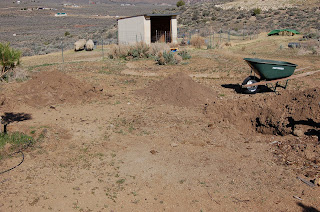 Tom felt sorry for our pathetic attempts to dig tree holes and came down with his backhoe and quickly provided us a place to plant our two new Austrian pines from Costco. We had been scraping and soaking for days. He said, "This is my shovel" and dropped right through the hardpan. There's good stuff underneath. As you can see in the background, our boys are still not sheared. 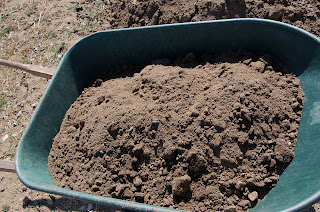 Ian wheeled up a load of llama poo. It lives up to its reputation and is why we don't have piles of it everywhere. Friends drive out to get it for their yards and gardens. It breaks down into this crumbly richness. 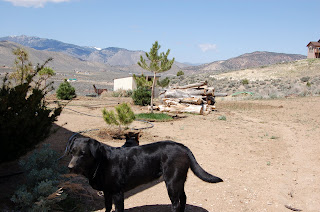 So our attempt at a windbreak has now moved to seven trees. The "topiary" pine tree used to be a promising pine until about two Januarys ago when the snow stood at a foot on the ground all month, and the starving rabbits ate up as far as they could reach. We have three of these Charlie Brown trees and I hope the new ones will have more success.

We worked in the yard all morning to get these guys in the ground and get the garden turned. Ian got his potatoes in. At one point Sammi heard her boys and ran to the end of our driveway, but it was to see the Ross family driving away in a succession of trucks, moving out. I wish them the best and am so glad that they've entrusted us with their dog. 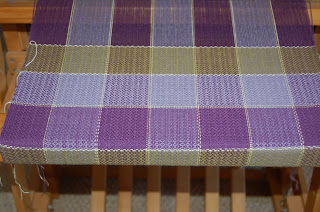 I took Valerie's advice and added another color, green since it was already a thread in the stripe. She suggested navy, but I don't have any navy. Valerie, did you mean a stripe or a whole towel?! 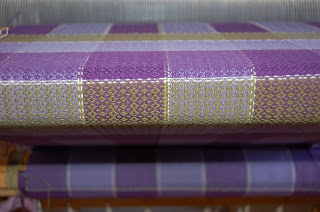 I'm comparing the two, and of course, they will look different when washed, but I'm thinking that the last two towels will be the same tabby as the first - no green. I don't know, but I think the next towels on this loom will be pinwheel in color and weave.

What I do know after planting trees for hours and then weaving for another hour is that every muscle in my back and legs aches as if I had just attended my first exercise class. I don't need to pay no stinkin' gym fee.
Posted by Sharon at 9:07 PM

That piece of weaving ---- such pretty colors. Looks like Spring!!

We planted trees this weekend too!

I like the green on the purple. regarding the navy..if you had some, start with a stripe. I think all over navy would just make thinks drab.

Looks like you get more done on your day off than I do on my "days on."

Green looks good so does all purple! I was putting up fence this week end.

I like the addition of the green in the towel. It makes me think of violets.

Like your trees. Our pines are for a wind break too.

I would never have woven green with purple but LOVE it. I need to be more adventures with color.

Good choice! I have to admit that navy is always my standby, but sometimes something else really adds the "zing" a project needs, like the green.

Interesting about the llama poo. I hope your wind break does well.