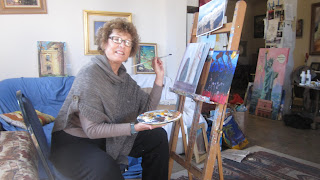 This is Diana, my classmate, new friend and ham. She painted a still life Friday. We're working in Erik's "living room" but his whole flat in the Riverside Artists Lofts looks just like this - every bit of it. Messy spaces agitate me, so I'm surprised that this is a comfortable place to work in. 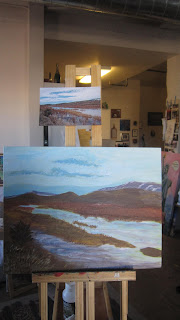 I chose to work on a photo I look of Long Valley Creek, about a mile from where we exit the highway. I wanted to paint water this week and I'm terribly disappointed at how flat the painting is turning out. I was torn between this and painting a building. As I was leaving, Erik said, how about this - we paint your building next week and then the following week, we'll work on the first four paintings and address the problem areas.

This is the first class he's offered in his studio and he drummed it up on Facebook. He assures me he's going to do it again, I'm not cut adrift at the end of these sessions. I haven't felt like such a helpless beginner in years - I get frustrated. 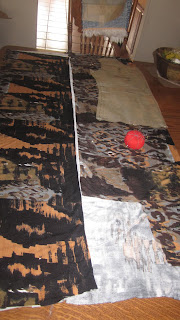 So I turned so something I've done since I joined 4H at the age of 10, sewing. You can see how huge that sample was that was missing from my yardage. The fabric was so wide that I was still able to work around it. 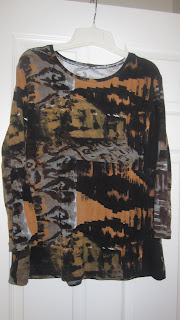 I finished the t-shirt today and realized how much skill I've gained since I sewed the first one. I bought eight pieces over two trips and, unlike the last project, I love this fabric. Good choice, Sharon. 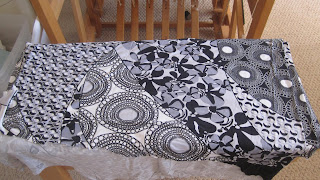 This is the next piece I'm going to sew and I've put it in my laundry hamper, even though I did preshrink it when I bought it. It's just been sitting so long, it could use a little airing out. One more piece, and I've done with tyranny of the single knits.

I did wrestle a warp onto Maudie Mae for the last of the Spady workshop samplers, but it's not a happy story. I'll save it for another day. This was a happy post.
Posted by Sharon at 9:13 PM

It will get better as you learn to 'see' the depth of things with paint. Don't give up! You'll do great!

So, you are proving what they say about practice and perfection! The t looks wonderful and the painting is pretty darn good too Sharon. Water must be incredibly hard.
Geez, you did buy a lot of single knits....once they're gone, what are you going to work with you think?

I've had my own warping challenges so I can sympathize. Sometimes it just gets ugly....but not this post. Reading it made me happy too.

wow...you are doing so many things!! How do you manage to focus?
Looks like the painting and sewing are moving right along.
Some warps are like that. I've been putting the current warp on all week, and finally after tying on and weaving the header Thursday night I've decided to resley at a closer set...all 537 ends.
sigh...

Love your t-shirt. Any advice for sewing on knits? I have some knit fabric I bought at a good price that I want to make one of those lightweight jackets/coverups with the cascading front on it. I've got the fabric washed, hoping to get to it soon.

The tee shirt worked out very nicely. It looks great! Lucky about that sample piece not affecting the layout. I should get to work with some sewing. I've got a whole whack of planned projects waiting to be started.

Water is freakin' impossible to paint. Even people, with all their subtle flesh tones, are easier. I've ripped and tossed far more "water" pictures than I've kept.

Your painting is coming along. Today my painting wasn't very good to me, and the way I deal with my paintings that fall short, is to write down what I learned....in many cases it is "what didn't work" like mixing two colors together that was a bad idea, or something like that. We usually learn more from our failures anyway....The other way I deal with it is to laugh about it.

I am so impressed with you and your willingness to step outside your comfort zone. The painting looks pretty good from a distance. Still, getting to learn from someone in their studio is such a wonderful opportunity.

I like the brown/black fabric. It reminds me of abstract art.

Maybe its just me. But I like your painting and can't wait to see the next. Love the fabric you made you shirt with.