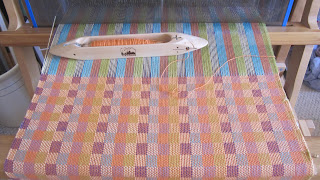 I have struggled with breakage on my right floating selvedge on all my towels. The left one is beautiful and I have no other breakages, but at the right one breaks at least once a towel. And even when it's intact, the right selvedge isn't something I would take home to show my mother. 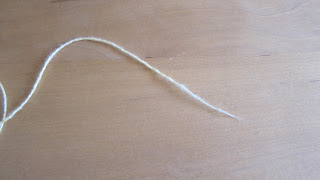 Today it broke for the second time in one towel. Grrrrrr. I want to blame a defective yarn but it happens to every thread, no matter who is the manufacturer. 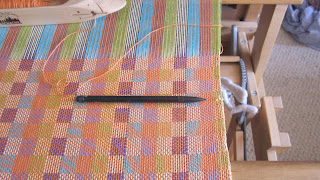 A couple of years ago I read Laura Frey say that she didn't use floating selvedge because she weaves too fast to mess with them. I swallowed hard and started weaving without one - the pencil marks the point. I want to sell this towel so I was really nervous, but absolutely nothing happened. I've since finished this one and several more and the right selvedge is better than it was before. I'm beyond surprised. 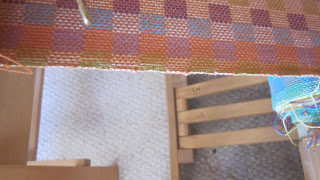 I've been getting these little pimples along the right selvedge all along and thought that was good. They're gone now. The right side is machine clean. I honestly don't know what to think. 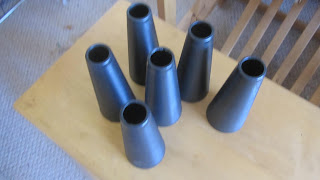 Meanwhile, I've emptied six cones on this recent warp. I've thought a lot about Michael's increase in price come August and have decided to order my PayPal balance in yarn before that goes into effect.
Posted by Sharon at 9:02 PM

Such beautiful work!
I may be down in a week or so :)

Glad it worked out, those towels are very pretty! Have fun shopping.

Once again your color choice for towels is wonderful. Glad you figured out that right selvedge. I use a floating selvedge only when it's necessary - there are certain twills I haven't figured out how I could possibly not use it.

Love those colours! I've found sometimes that I'm not able to figure out away around a floating selvedge. Other times, they do seem to get in the way.. I figure whatever works for each project is the right way :)

I had a discussion with a weaver friend here about my selvedges. My right one was always worse than the left (I don't use floating selvedges). I sat down at the loom and demonstrated throwing the shuttle and beating, and discovered that I held the waiting shuttle differently in my right hand that the left while beating. I'm now on a crusade to make them the same (of course that means I have to be weaving, which I'm not...). You might take some time to pay close attention to that portion of your work - how YOU work - it is probably the root of the problem. Not that your selvedges are bad to start with...

That is very interesting. I know people who double up on the floating selvedge to keep the threads from breaking, but if eliminating one helps you, then you are saving a bit of thread.

Mel and I took advantage and order a few more colors, plus checked on some back-ordered ones, for our Box of Crayons (aka "stash").
I'm hoping to get a warp on soon - I've had a glitch lately, an over-medication problem with thyroid meds which hasn't been fun. :(
I am better than I was, but still have a bit to go...and am inspired each day by looking at all the colorful yarns waiting for me to get off my...