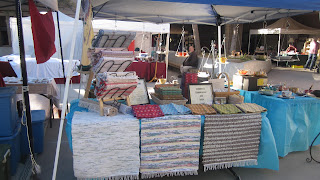 This is what my part of the booth looked like.  I realized after the fact that my stuff really wasn't in keeping with the other items for sale in the courtyard.  We were next to a guy making kettle corn and the wrestling team had a barbeque on the other side of him.  This space was perfect for Carol and Kerry's  bird feeders as it was open on three sides so the sun was always on some of them.  I've signed up for an interior booth for next year.  I'm excited by the challenge.  I didn't do great but I did okay and know I can do better. 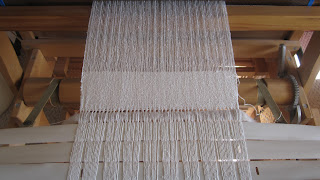 I've never been bitten by the scarf bug but the three other weavers at the craft fair all had scarves and I suddenly wanted more than anything to make some too.  All three of theirs were different so I put on my thinking cap and decided to weave up some of the Rayon/Silk that I bought from Laura about seven years ago.  I didn't know what to do with it so it's just been gathering dust.  She and I talked about dying it since the two fibers would take up the dye at different rates.

Melissa came up from SoCal for the SOAR (SpinOff Autumn Retreat) conference at Lake Tahoe.
She came a day early so we could spend some time together.  While I waited for her, I finished weaving the scarf sample.  After dinner we knitted and watched the Giants game. 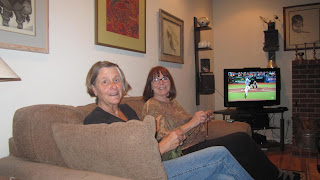 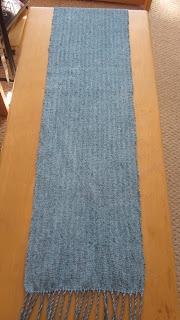 Today we put the scarf sample into a dye bath and had a delightful surprise come out.  It did take up the dye at different rates and the silk is a much deeper shade.  Also, because I put 24 ends per inch into a 10 dent reed (it has 10 spaces per inch) I couldn't put two into each space so four spaces had three threads and that's what created the striping effect.  I love it but am going to do another sample with 20 ends per inch before I warp up for multiple scarves.  It's just Plain Weave but it doesn't look plain to me. 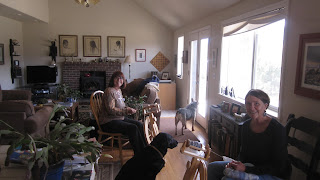 This morning we got out our spinning wheels and made yarn.  I haven't spun in several months.  I just haven't had a vision for what to spin, lacked enthusiasm and direction.  Melissa bought enthusiasm and direction in spades.  She's excited about the classes she's signed up for at the conference, showed me the art yarn she's made and also a book of how to make art yarn. 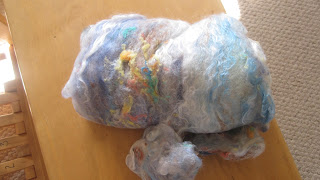 I dug out this bag of fiber I bought from Sue Flynn at Spindle Camp in June.  It's from Cottage Creations and is a mishmash of all kinds and colors of fibers.  I was finally ready to spin and glad to be interested and excited again. 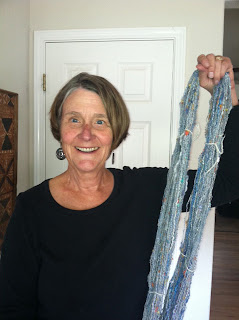 This is how the first bat spun up.  I used long draw to allow the slubs to come through and then plied it with a 60/2 fine silk thread that I bought years ago.  It's fantastic.  The excitement and anticipation are back.  I'll use this for a contrast thread in a scarf warp.  Now I have to decide what that warp will be - not wool!

I love that photo of you! I haven't spun in awhile, either. Not that I don't want to, just too much on my plate.

Love hearing how enthused you are this week! Very fun dyeing after weaving. I haven't been spinning either, no time for it, hoping to get back to it shortly.

Ah-ha...the scarf bug bit you! I think they're a fun way to use up bits and pieces leftover from other projects. Have fun! LOVE your yarn...that will look great in one of your new scarves!

Nothing like a fellow fiber friend to bring enthusiasm :)

I just love that scarf! The striped effect and the way it took the dye are beautiful.

With the cooler weather I've been knitting a lot lately, but not doing any other crafts.

Yay for getting back to spinning. That batt spun up beautifully and it will make an awesome scarf! Lovely..