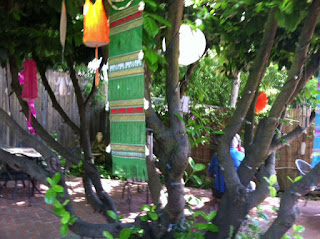 I got home last night and realized the only photo I took all day was at Sopa, a Thai restaurant in Nevada City, where Kerry and I ate lunch.  She is the neighbor I talked into accompanying me to the Not 2 Square weavers meeting yesterday.  I've virtually belonged to this group for a couple of years but this is my first meeting and boy was the trip worth it.  It's an informal gathering of weavers who sit in a circle and share their projects and then answer questions, and was I ever full of questions.  It was a five-hour round trip, but I drove home feeling like I had attended a class. 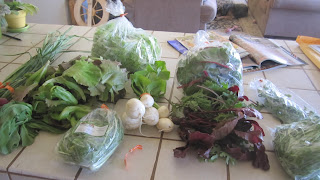 I came home through Reno so I could pick up our CSA box.  This is our second pick-up and the third week for weekly subscribers.  Already the box is bigger.  I try to work the pick-up around other appointments but Nevada City was a pretty big work around.  We're going to have the fresh greens tonight - one day old.  Yum! 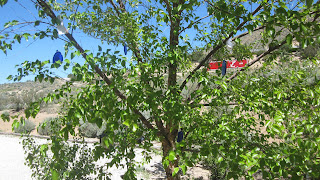 I like how blue glass looks when the sun shines on it so I hung a couple of bottles on the tree that I had emptied of essential oils.  Then I decided to try some orbs of recycled glass that's I've hung inside our windows.  They're heavy and ultimately the suction-cup hangers lose their suction and they drop to the sill.  Not only do they look great in the tree, they twirl in the breeze - such a happy surprise. 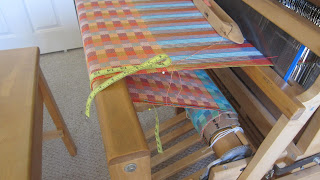 The Not 2 Square group has some extremely talented and experienced weavers.  I took my iPad, expecting to take photos and make notes.  I was so absorbed I completely forgot.  There was so much give and take and tips, like this one.  I had been measuring the warp as I progressed with a pin on the selvedge, then I'd measure the distance between pins as I advanced the warp.  My towels are not quite the same length.  Igor uses grosgrain ribbon and Ingrid uses bias tape, premeasured and pinned along the right selvedge.  Since I had already cut this measuring tape to 30" for convenience, I'm using it instead.  Ingrid said she doesn't wind it on but lets it dangle so she can remove it and use it for every towel. 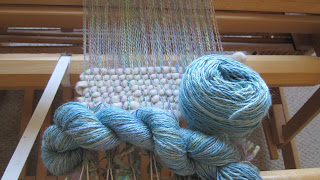 I took all my handspun skeins and when they got passed around the circle, I got some admiration but more importantly I got some direction.  I'm always in awe of Dee Jones, as a person and as a weaver.  I want to grow up to be just like her!  From her comments I took the initial steps of creating a scarf.  I tried off-white commercial yarn but it washed out completely so I'm trying some hand dyed, handspun silk I did years ago. 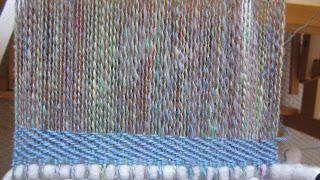 Someone suggested a 2/2 twill but I felt that smothered my warp. 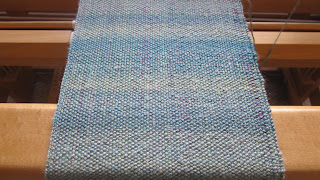 I remember Cindie saying that sometimes the best solution for an interesting warp is just good old plain weave and so that's what I'm doing.  I have a feeling that I'm going to be weaving a lot of "projects" before I finally get my scarf sea legs.  I had it in my head that my novelty yarn had to be warp (the up and down threads) but this is looking a lot like upholstery.  I'll finish this off and the next project scarf will be using my novelty yarn as weft (side to side).  I was called this afternoon to sub tomorrow so this is in limbo for now.

I think you'll like your yarn better as the weft - especially if you use a thinner warp and set the warp threads slightly further apart and make the scarf slightly weft-faced. I would think this would showcase the textured handspun better. Just my opinion.

Being around like-minded people helps motivate me, so I am so glad you get the chance to be with other weavers when you can.

I prefer twills for scarves as I like the way they drape better. I do sometimes have to play around with sett to get the right balance though. If the tabby looks right, then I often resley a bit closer to make the twills work. I find that the scarves I've done in tabby tend to be too stiff for my liking. It's all a matter of what works for each weaver.

My first choice for scarves are twills just because of the drape but yes, sometimes tabby works too, often I'd sett it a bit closer and use a very thin weft. You don't have to use a 2/2 twill - try a point twill, a fancy twill or a broken twill. I'm in love with twills, all different kinds.