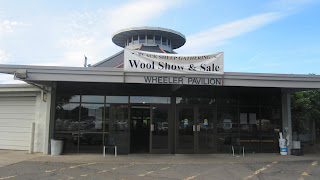 I saw a post on Facebook while we were in Bend and realized that the Black Sheep Gathering was the following weekend.  By leaving Bend a day early and leaving Washington a day early, we were able to attend for the day on Saturday.  Ian found a room in the La Quinta near Autzen Stadium where the Ducks play.  It was in a little tucked away space near the park and amphitheater and away from freeway noise.   The staff apologized when we checked in on Friday, saying it might be a little noisy because of concerts.  We were on the third floor and by opening our windows, we got to hear live music.  Much better than freeway noise! 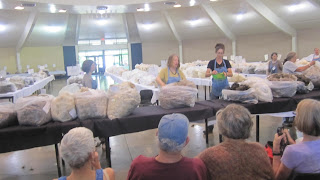 We came into Eugene on Friday because we didn't want to miss any of our favorite event - Judith MacKenzie judging the wool show.  There were more fleeces this year than in recent years and she ended up running an hour over because she wasn't willing to slight any of the classes.  Two of the last classes were Shetlands, a breed that she has raised and is clearly still partial too.  She said she still has plenty because they're so special to her, they were at her house and not her warehouse when it caught on fire.

All the time she is judging she is also instructing, and questions from the floor are welcome.  There aren't many because most of the audience has some experience with sheep, but she takes her time with them as she does everything else.  I got so excited listening to her talk about Shetlands, that I decided I'm going to process some of our bright white dual-coated boy myself.  I was surprised when she said that white is rare, and also that it's hard to find a shearer for Shetlands because of the roo line where they naturally moult.  Most shearers don't want to mess with it, because you have to decide whether to go above or below it.  In fact, I looked at one bright gray fleece in the wool sale and decided against it because the shearer had cut below the line and it was slightly felted along the shear line. 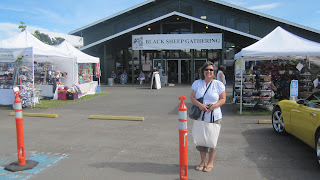 There were more vendors this year than I've seen before.  A couple dozen were set up outside and it was rather overwhelming.  Many of the booths were selling similar items, roving, silk and fluff to spin.  It didn't seem like people were buying.  I know I wasn't.  I can buy from Mim or use what I have.  I did buy a large Bolga basket.  I'm not sure one can have enough of them.

I realized as we were leaving that I hadn't taken photos all day.  I ran around snapping like crazy and was glad Linda walked out at just the right time.  She came down from Portland and Laura came over from Prineville.  Doris, Virva and Sharie drove up from the Reno area.  Doris has been raising sheep for 20 years at least but since she retired, she's gotten very serious about developing her breeding stock.  She said what turned her sales around was coating her sheep.  She also bought a new Merino ram last year from Janet Heppler. 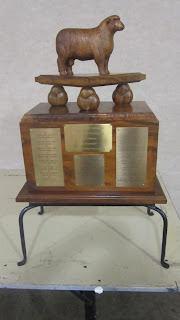 She entered five fleeces in the competition for the Black Sheep Cup.  This award acknowledges the finest small flock entered in the show.  Doris won it!  Ian and I enjoyed spending the afternoon with our five friends and watch Doris sail around on cloud nine. All her sheep are crosses but she credits Janet's ram with bringing new life to her flock.  By the time I stopped for the photo, all the fleeces had sold and Doris was gone. 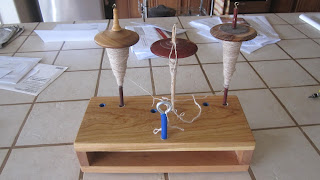 Okay, I did buy something.  I went with Sharie into the vendor area because she wanted to take a peek at Ken Ledbetter's booth - KCL spindles.  I looked at the spindles but I told him that I have cops on two spindles and because I hate to ply, I don't know when I'll get them off.  He reached underneath and pulled out this goodie.  He's just started making these lazy kates.  This one accommodates his as well as Goldings, but he's going to make a smaller one for just his spindles.  It's perfect.  The mess and disaster that I used to have when plying from spindles is no more.  I really don't need more spindles.  Since when does need have anything to do with anything? 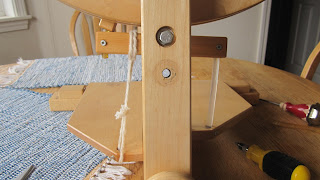 This was my wheel after Spindle Camp. 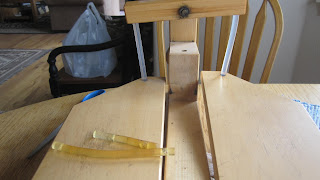 I had a package waiting for me from Village Spinning and Weaving when I got home from Oregon with my replacement parts and also a new 1 1/2 yard Ashford nitty noddy.  John from Village Spinning and Weaving was at BSG and I talked to him briefly about changing these bands.  He told me that the secret is to get a square screwdriver tip from the hardware store and put it in my battery operated screwdriver.  Ian already had one and it made the change a piece of cake.  Don't mix up the screws!  John told me that in the future, when the bands get yellow, they're on their way out.  Good to know!

Don't you just love listening to Judith as she judges fleeces? That lady is a treasure trove of information and a treasure herself.

Now, you make me want to check the connectors to my treadles to see if they are yellow. My wheel is nearly 10 years old, now.

Is your white Shetland Mickey? Dual coated Shetland can spin up very finely. According to Judith, it is what was traditionally used to make wedding ring shawls from.

Good to see another spindle kate coming into the world. None thus far have worked for me (too many different kinds of spindles, I guess), but I live in hope.

I enjoyed listening to Judith judge the fleeces too - she is such a wealth of knowledge. Even though I have no intention of ever buying one of those big fleeces and processing it myself - it was informative to hear her thoughts and ideas of how the processed fleece would be used.

The Shepherd was frustrated by how Judith treated our white Shetland fleeces - on one hand she said how rare they were (and how lovely they were), on the other, she moved them down the line because they WERE white - ours placed 7th and 9th - the 7th place one got bumped down from 6th simply because it was not bery big (he had skirted the living daylights out of it...)

You must have been sitting right behind me from looking at where your picture was taken from. Can't believe I didn't see you. It was a beautiful day wasn't it. :-) Glad you had a nice trip. T.

My husband and I were up in Washington and Oregon the week before Black sheep and drove through Eugene a couple days before it. I'll have to remember to watch for this kind of event as we travel, in future. It's lucky for you that you were able to make it!

It was really fun seeing you and Ian, and Linda (and everyone else). I felt like I was running six ways from Sunday, but it was a great time.

Call next time you come to Bend...

I have that same spindle kate that I bought from Ken at SOAR. :-)