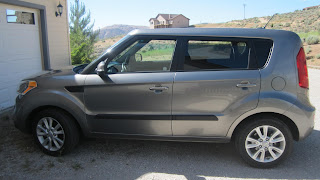 I know, I know - two blogs in one day but we're leaving in the morning and my laptop is not.  Ian and I talked about renting a car when I was at Spindle Camp.  Two things I learned from my cabin mates.  Barbara Sue us asked if we knew that we can go through Costco for a rental.  None of us did.  Hermi said to make sure that we're not paying the airport pick-up tax.  We didn't know about that either.  Ian arranged a rental through Costco at Budget rental and at a site away from the airport.  With Costco we saved $75 and not paying the airport tax was another $60.  Good to know!  We chose a midsize, they said "like a Dodge Avenger" but what we picked up this morning was a Kia Soul.. 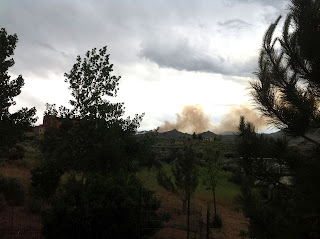 A ferocious thunderstorm came through on Sunday with plenty of lightening and thunder and it sparked a fire in the south end of Red Rocky Valley.  The crews stayed on overnight to tend the hotspots, including a helicopter.  In the afternoon, a second system came through.  It soused us with blessed rain and the fire guys were able to go home. 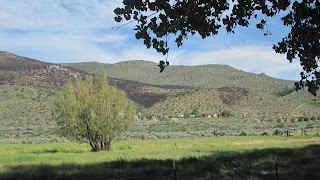 Last year I blogged about a fire abatement program we participated in, offered through the Fire Safety Council.  They brought in Bobcats specially equipped with a "masticating" apparatus on front.  They chewed up much of the sagebrush around our house and planted native grasses while they were at it.  This spring the area where the sagebrush was has filled with a weed called tumble mustard.  We wondered if it would be equally flammable.  You can see in the photograph above that the lightening strike was above Tamara's house to the right.  You can also see where she had the fire abatement done.  That area is a neat square. 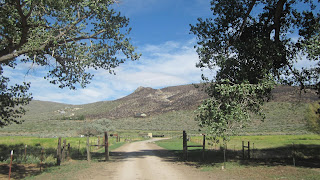 This house didn't participate in the program and it's thanks to helicopters and hand crews that they didn't lose it.  The winds accompanying the thunderstorm and the winds generated by the fire were horrific.  I'm a believer.
Posted by Sharon at 6:18 PM

I didn't know that about rental cars thru Costco either - good to know....and I didn't know a thing about the airport tax. Cute car.
Have a great time!

I didn't know about Costco, either, but that is good to know.

So glad that fire got put out so quickly.