Color on a Sunny Day 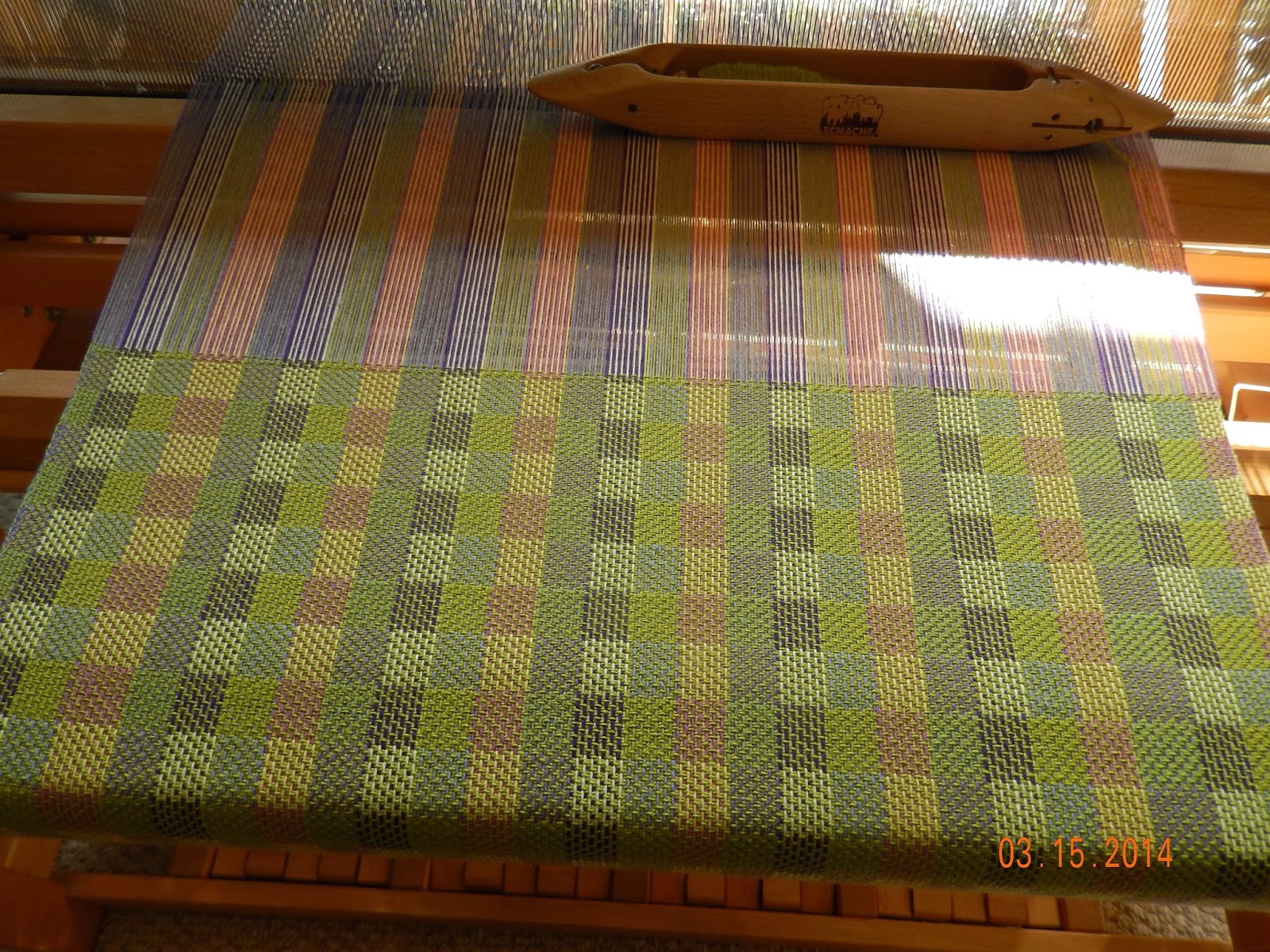 I realized about half way through my second towel on this warp that the fourth stripe in from both edges is wider than the others.  I got my stripes turned around - those should be on the edge so that the edge strip isn't more narrow than the others.  Now it's a design element. 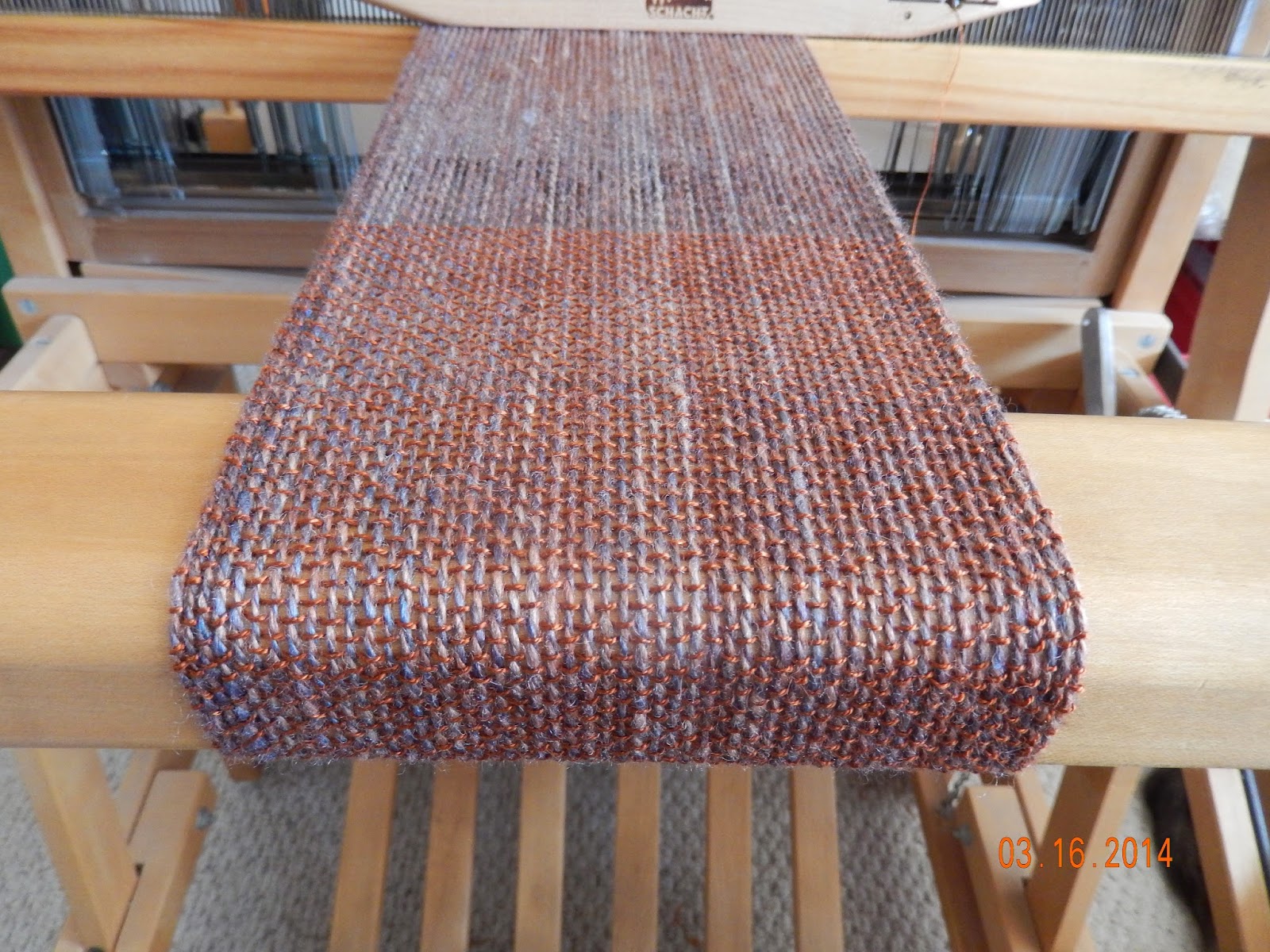 I'm weaving another scarf on Maudie Mae.  I have two skeins I spun that are wool in both ply.  I made them before I started thinking about scarves and haven't known what to do with them, so today I warped and started on this.  It's going to be pretty. 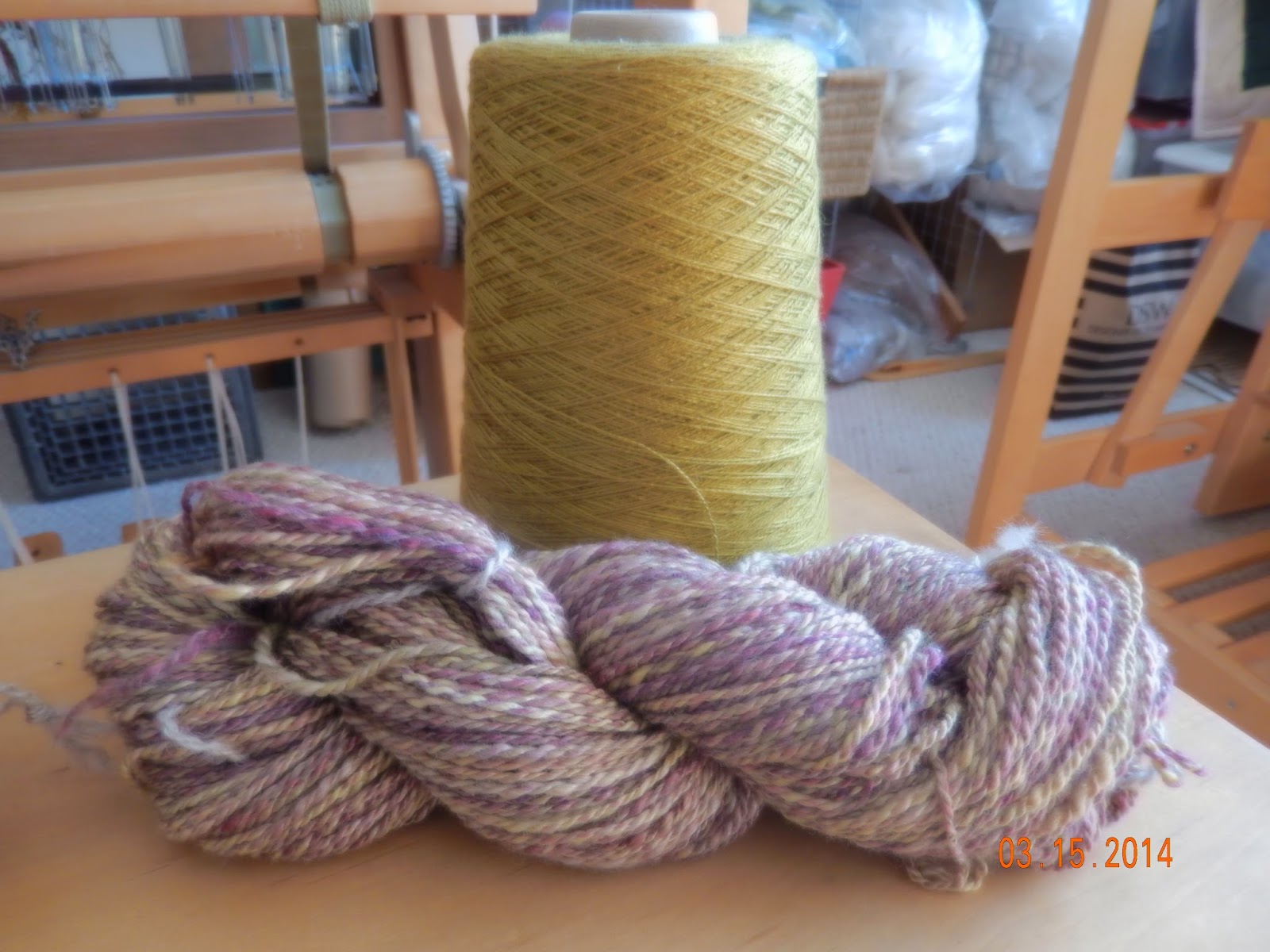 This is the other skein and I'll weave it next. 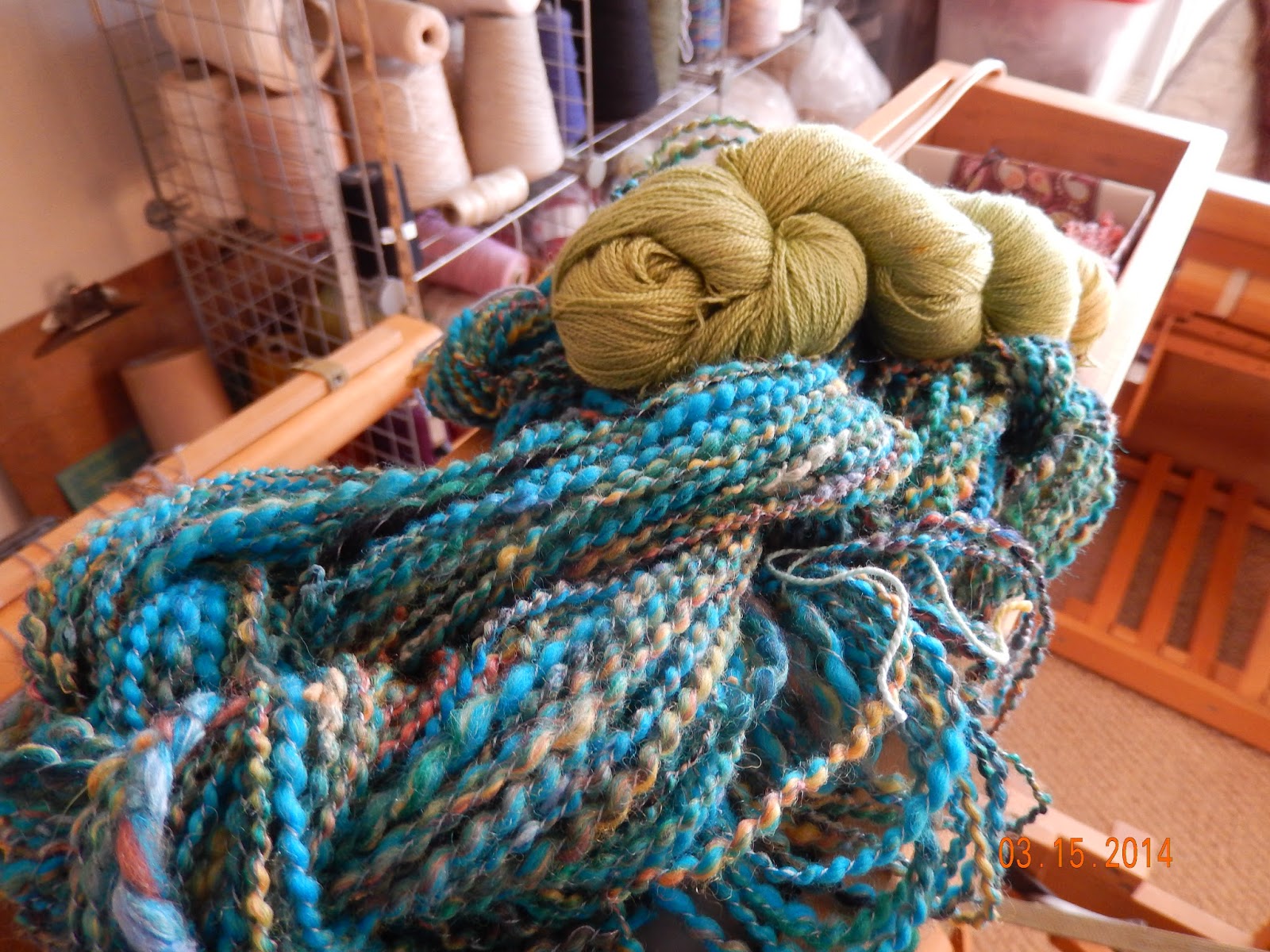 I wound this yarn into a warp and ordered a teal Tencel from Yarn Barn for weft, but when a week passed by and I hadn't heard anything, I gave them a call.  That's about how long our answering machine had been turned off and there were some problems with the order.  For one thing, the teal has been back ordered since January.  I'm looking to maybe using this green silk instead. 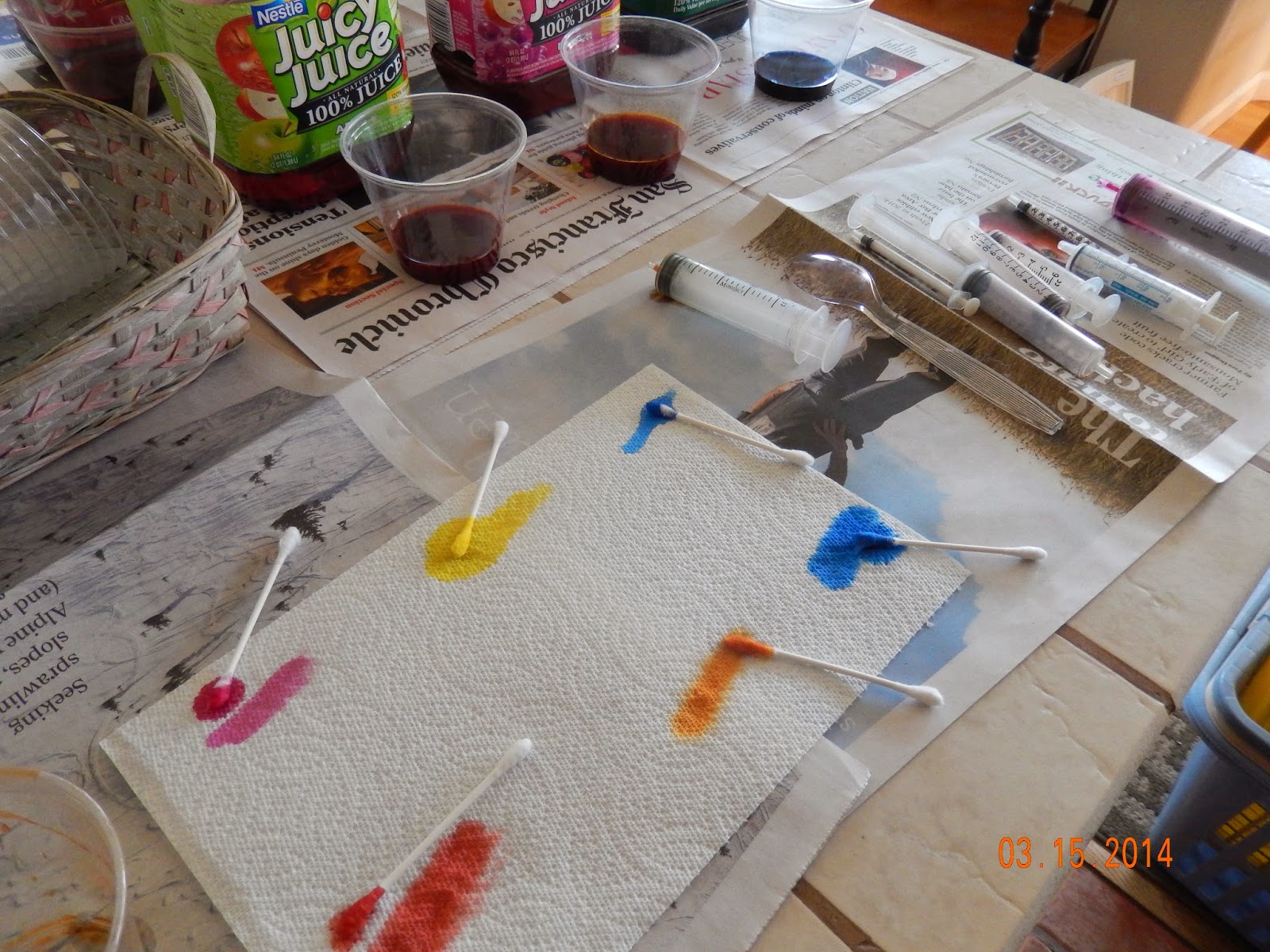 I decided to dye some BFL/silk yesterday. These are the primary colors that I've used ever since Charlene Schutch's dye workshop a decade ago.  She called them warm and cool primaries so that's what I've always called them.  Mim also still uses these dyes, though she's supplemented them with some other hues.

I was dragging my feet about dyeing since I couldn't figure out how to get magenta and I really want to add that in my blends.  I learned that magenta and fuchsia are the same thing.  In fact, what was originally called fuchsia was changed to magenta in 1869 to celebrate the victory of the Battle of Magenta, near the town of the same name.  I also learned that Charlene's "cool red" is magenta.  I had it all along. 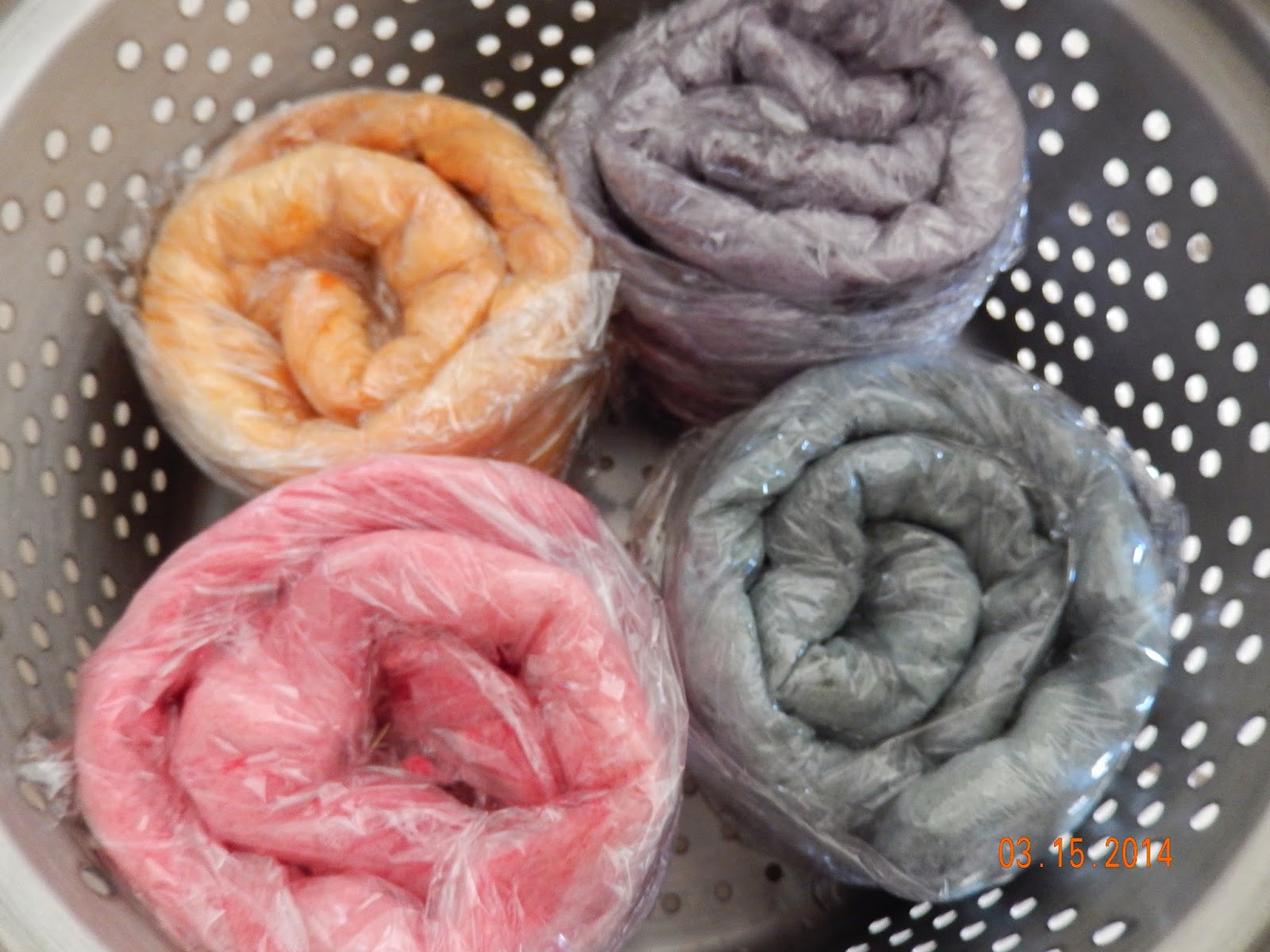 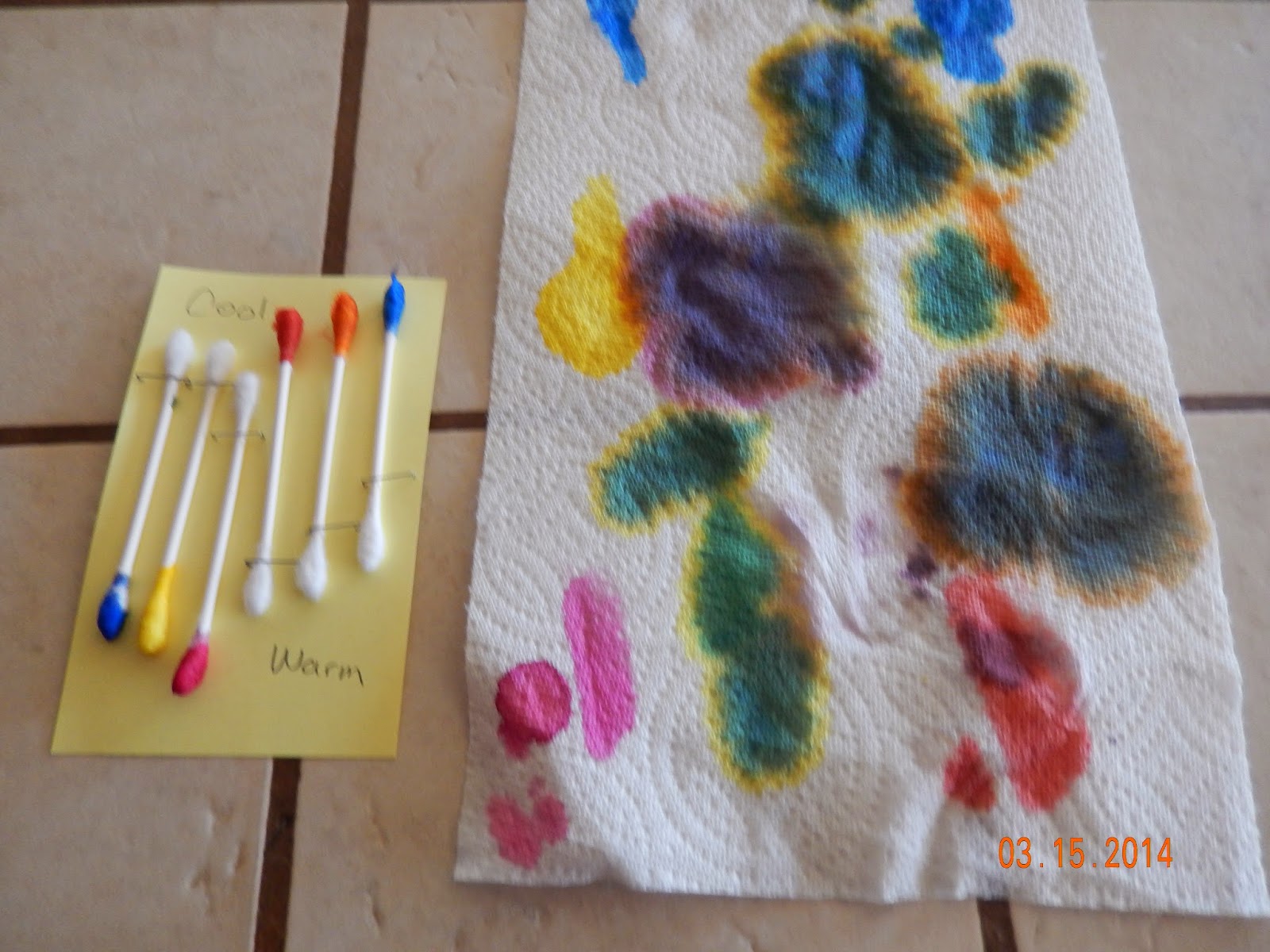 I decided to keep the cue-tips for future color reference.  Mim has told me forever that when you blend three or more hues, the colors break out during the steaming process.  You can that they separated right on the paper towel when I was testing my mixes. 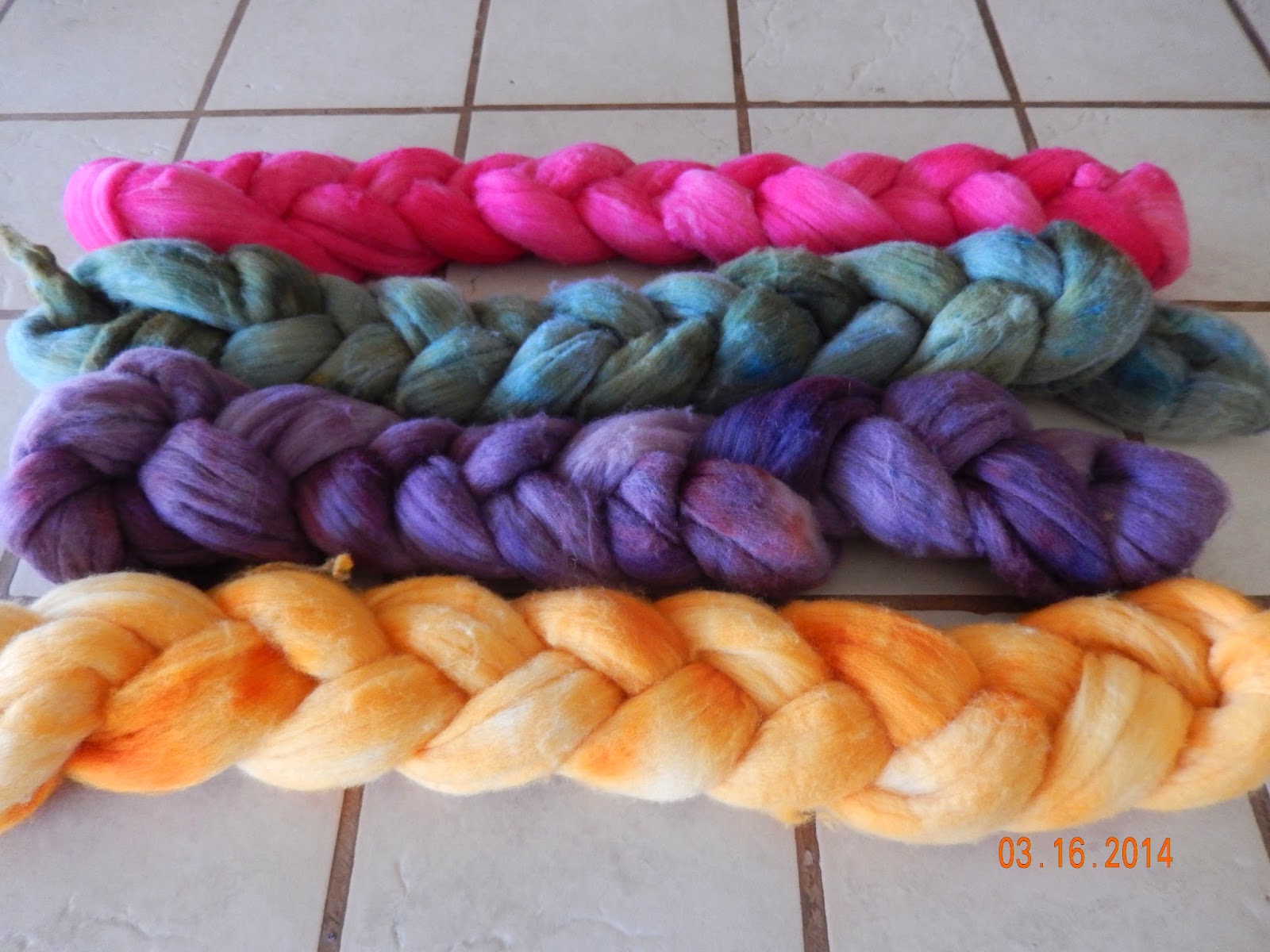 And these are my results today after I fluffed the dried roving this morning.  I got much more complex results and am really pleased even though while I was dyeing yesterday, I was nothing but frustrated. 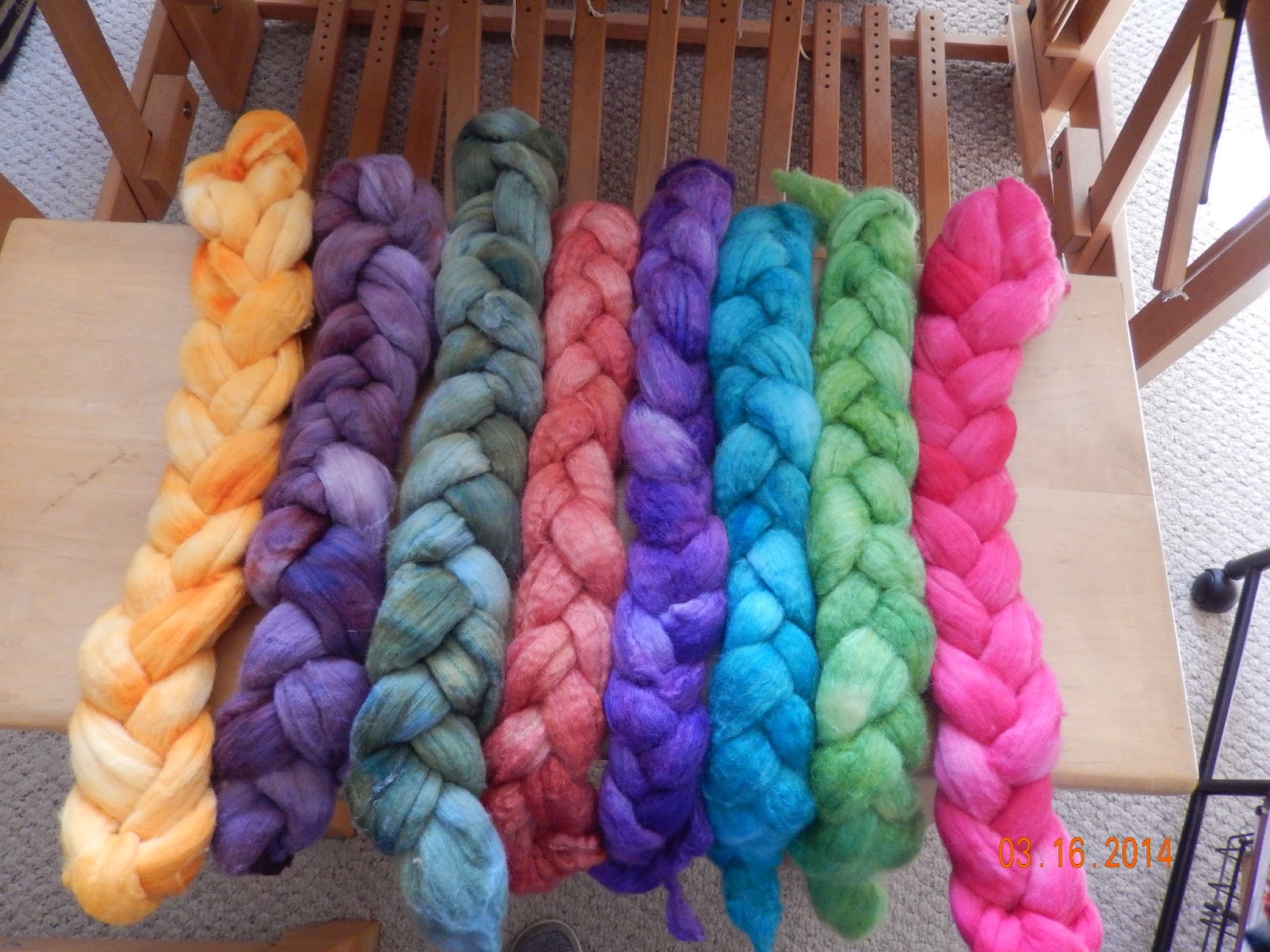 And this is the full palette I'll be working with.  I have no stash anymore so my blends will be variations of these eight, plus black and white and some extras.  I meant to add some silk noil to the roving I dyed yesterday but my intentions were left at that - intentions. 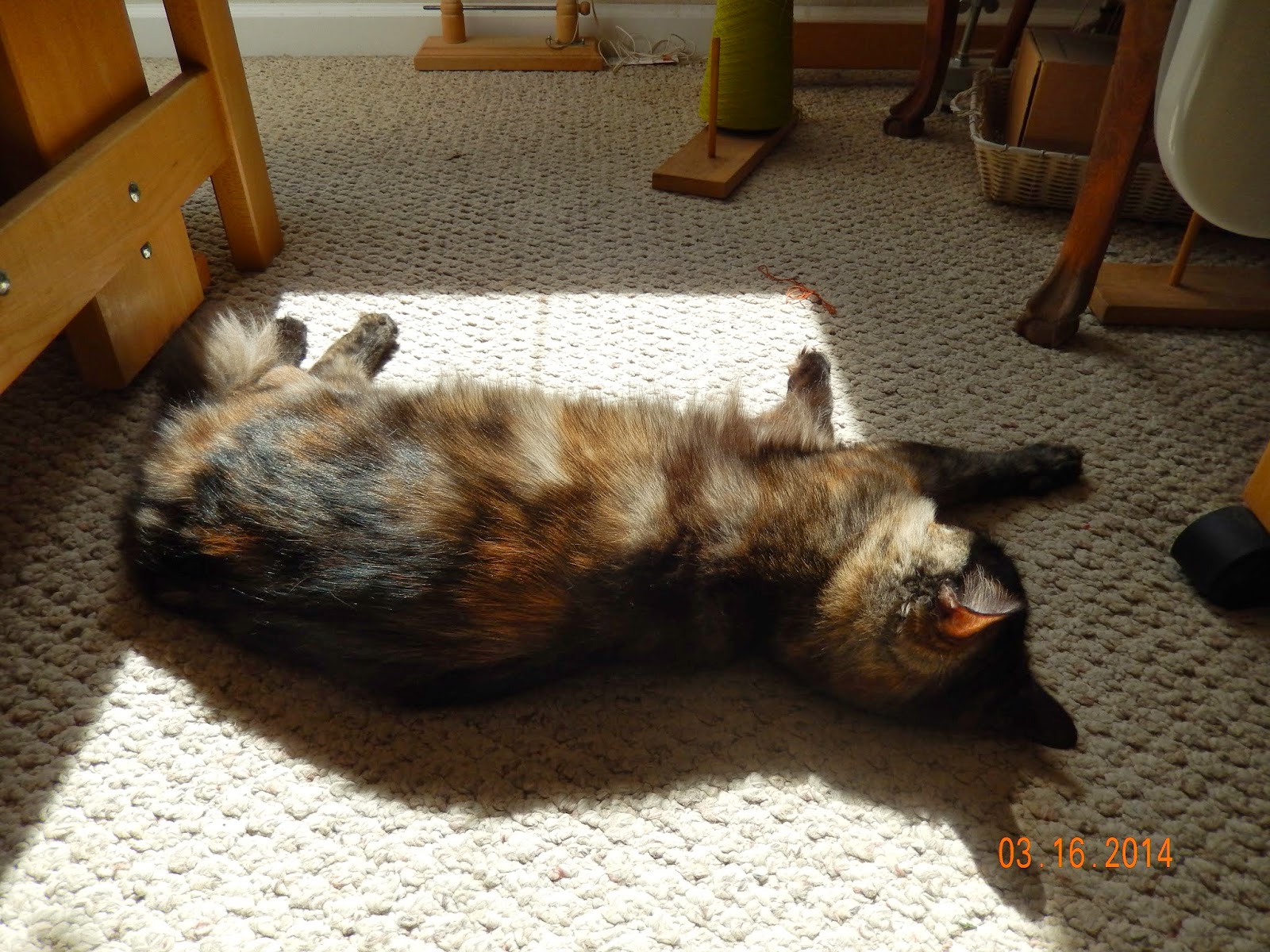 I had company in the studio this morning.  I think she was just exhausted from being naughty.
Posted by Sharon at 2:49 PM

Good to see you back weaving and dyeing - love the colors you got!

Wow! That's a superb colour range to work from. Our kitties do that exhausted sleep after a hard play session as well. My Cat is never naughty, but Kevin, hubbies cat, doesn't seem to know the expression well behaved :)

Beautiful colors Sharon! I need to buy more top from Mim, so I can get going with my dying again :)
I've started posting to my blog again! :)

I love the new photo on the head of your blog. What beautiful eyes she has! Interesting fact about Magenta/Fuchsia. Especially since fuchsia is so irrationally spelled.