Color on a Gray Day 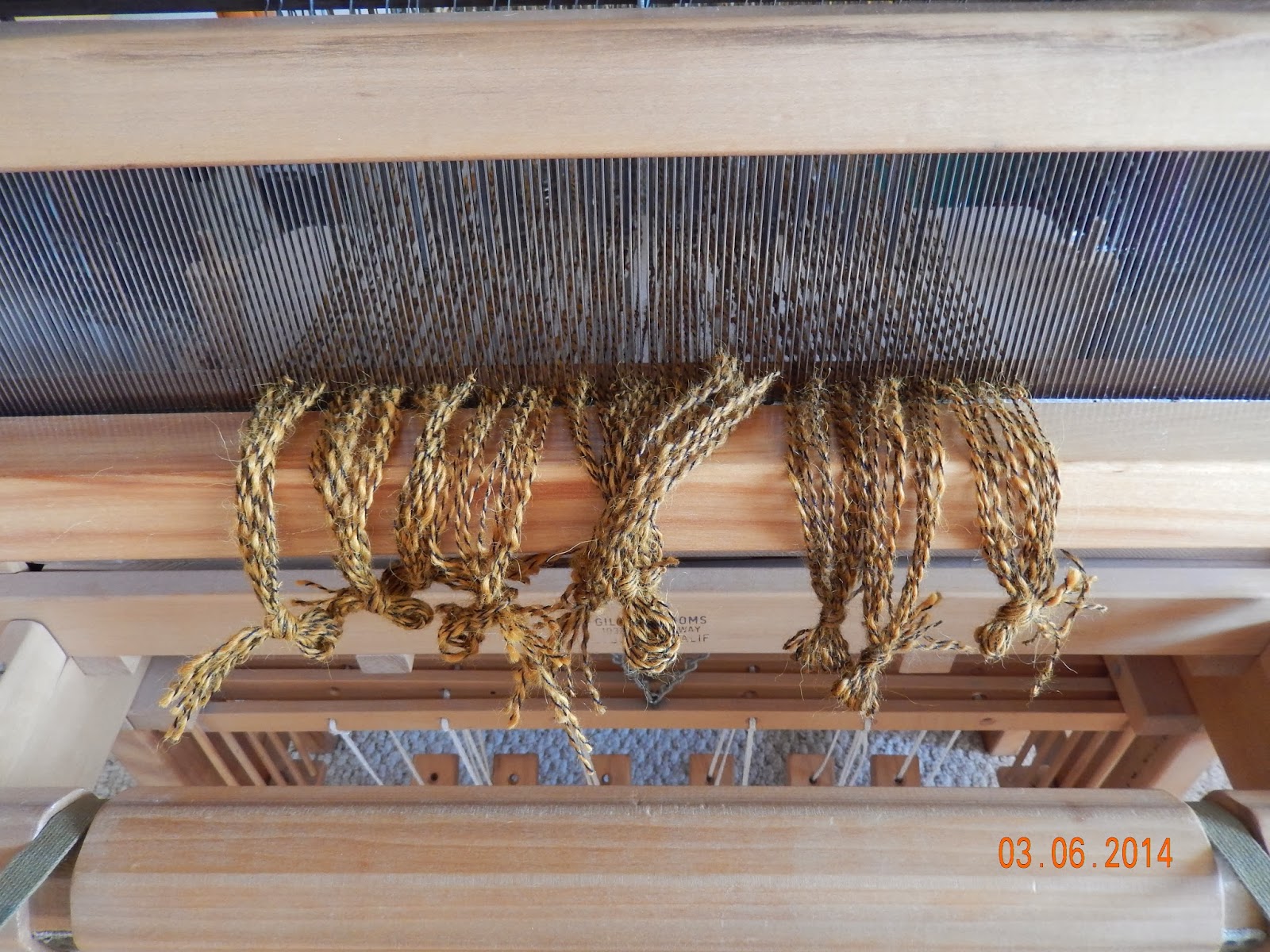 I calculated that I had enough yarn for an 8" scarf but discovered that I actually had enough for 10" and kept winding.  Once I saw it in the reed I realized that 10" is a *really* wide scarf and I couldn't imagine wanting to wear it so I tore out enough for 7 1/2" and tossed it over the back.  I thought I'd wind it onto a spool and use it for something later but I wasn't quick enough and Maddie turned it into a cat toy. 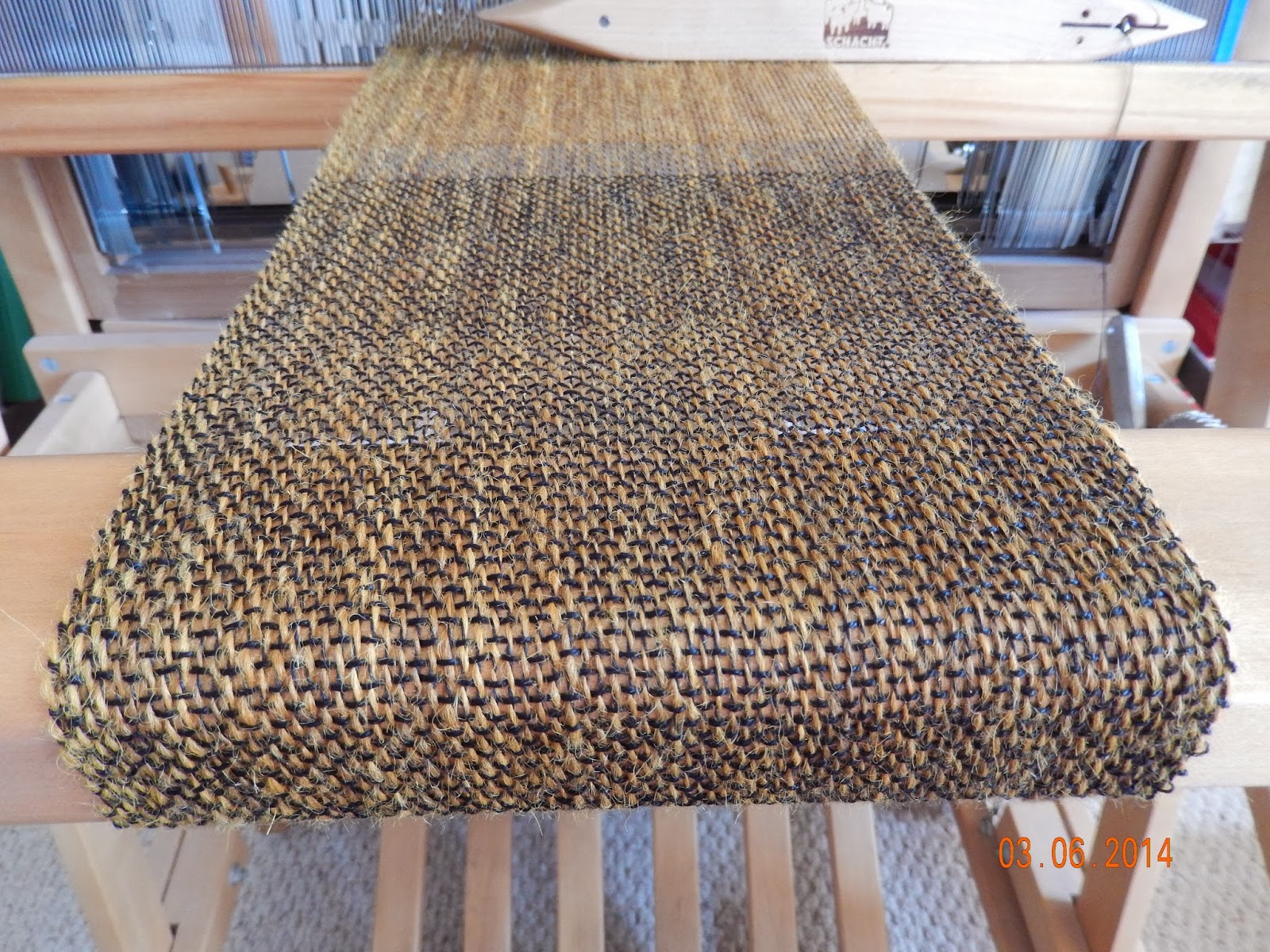 Once I started weaving I could see I was right.  I was a little concerned about the hairy alpaca yarn but the tencel weft seemed to tame it nicely. 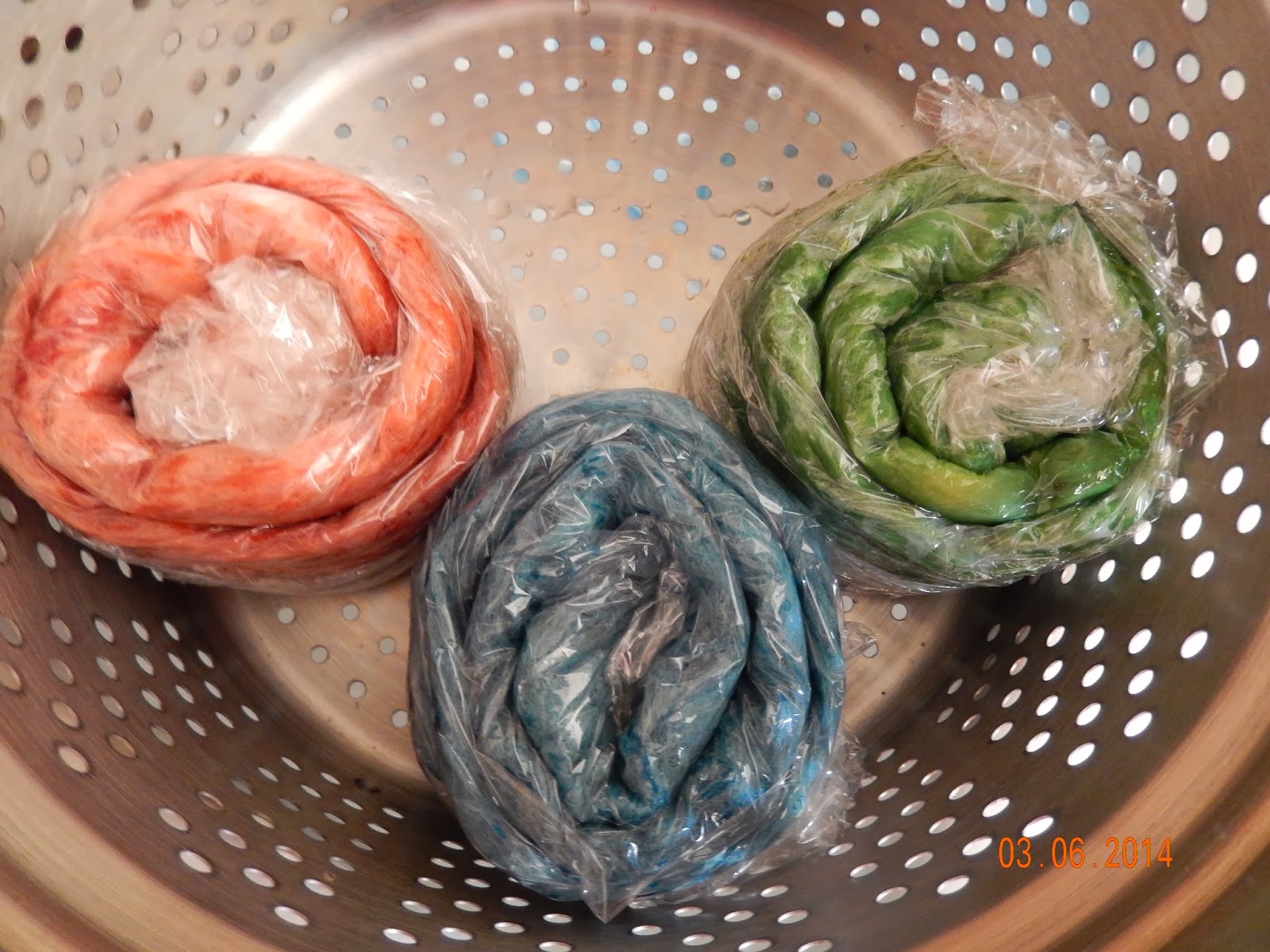 I decided that the fastest way to get more roving for blended batts was to dye up the 8 ounce bump of BFL/silk that's been sitting around here.  Cindie Kitchens had sent me a great link to Design Seeds, a color inspiration web site.  I chose these colors from one of the palettes but didn't like the options for a fourth color.  I had enough roving for one more color but was stumped. 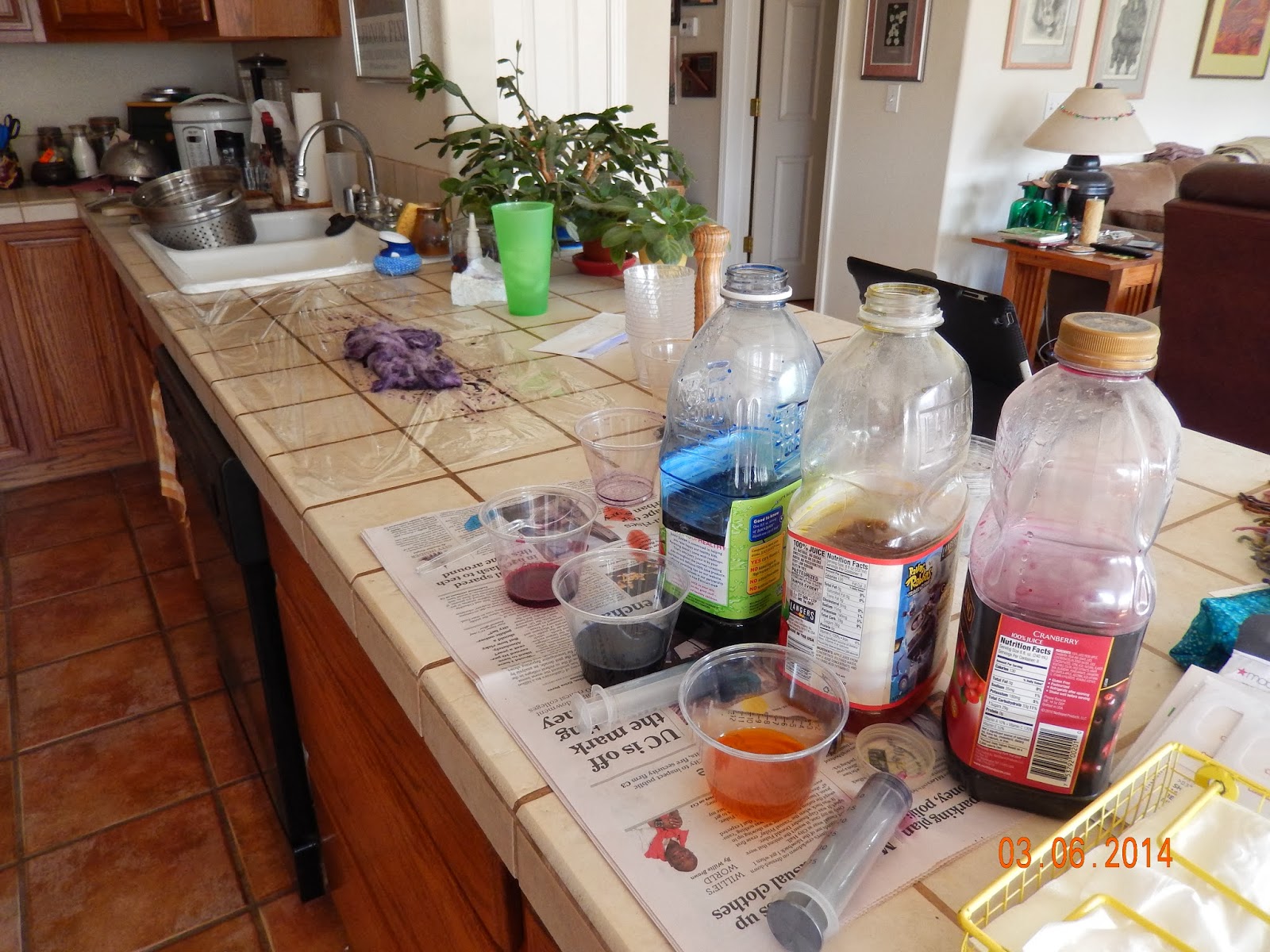 It's probably been two years since I've dyed anything and I felt really awkward.  I had asked Nina at Odette's Obsessions for help on kettle dyeing roving and in response she sent me a chart of dye strengths to WOG (weight of goods).  I followed her chart but decided to steam packets so I could get four separate colors.   I had the perfect ratio of dye to wool as the dye completely exhausted and there was nothing to rinse out afterwards. 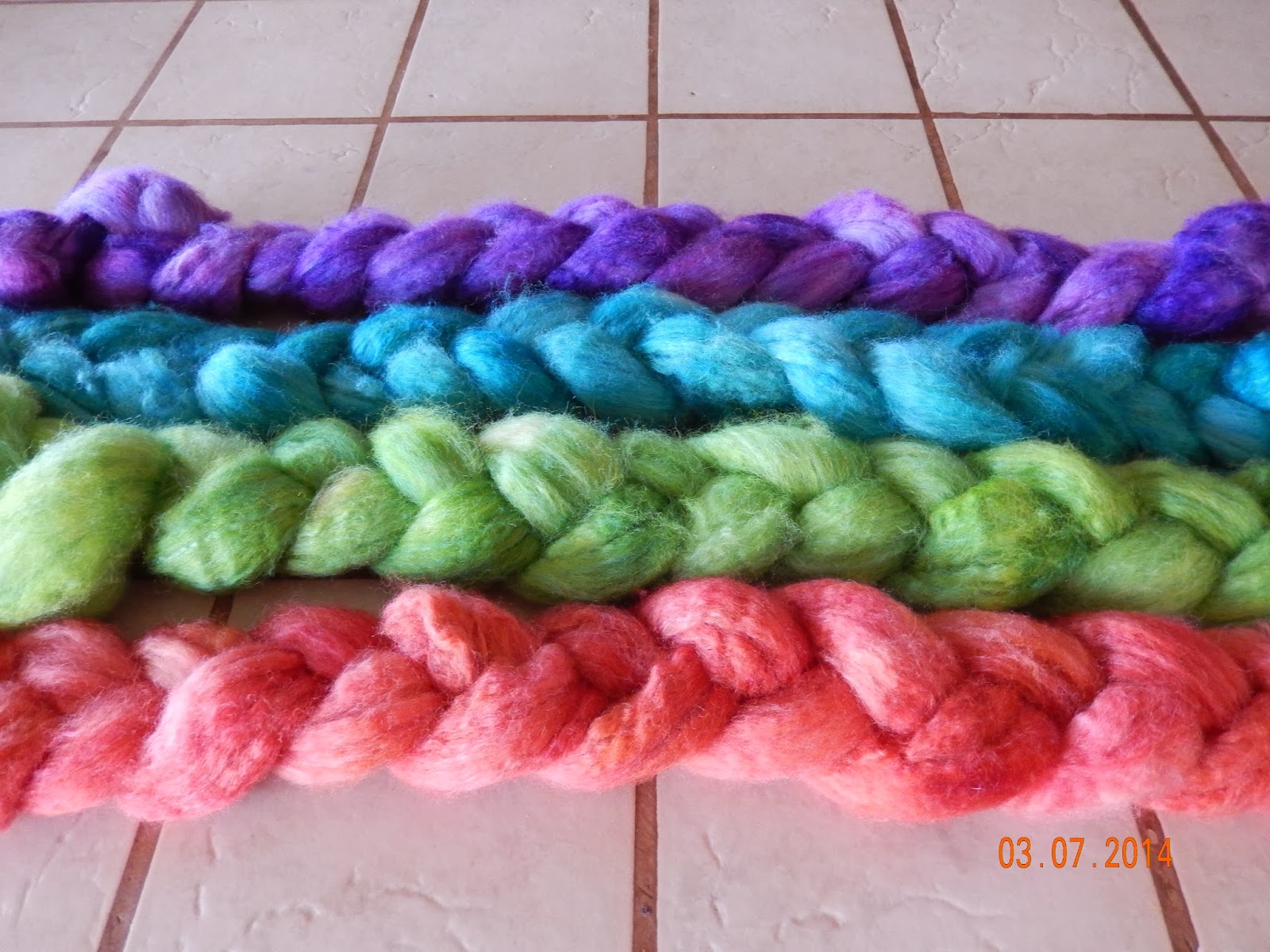 These are my results.  I only blended two colors together, as though I were blending to paint.  I can see that on my next set I need to blend at least three colors to get more complex results to tone these down.  This is a good starting point though. 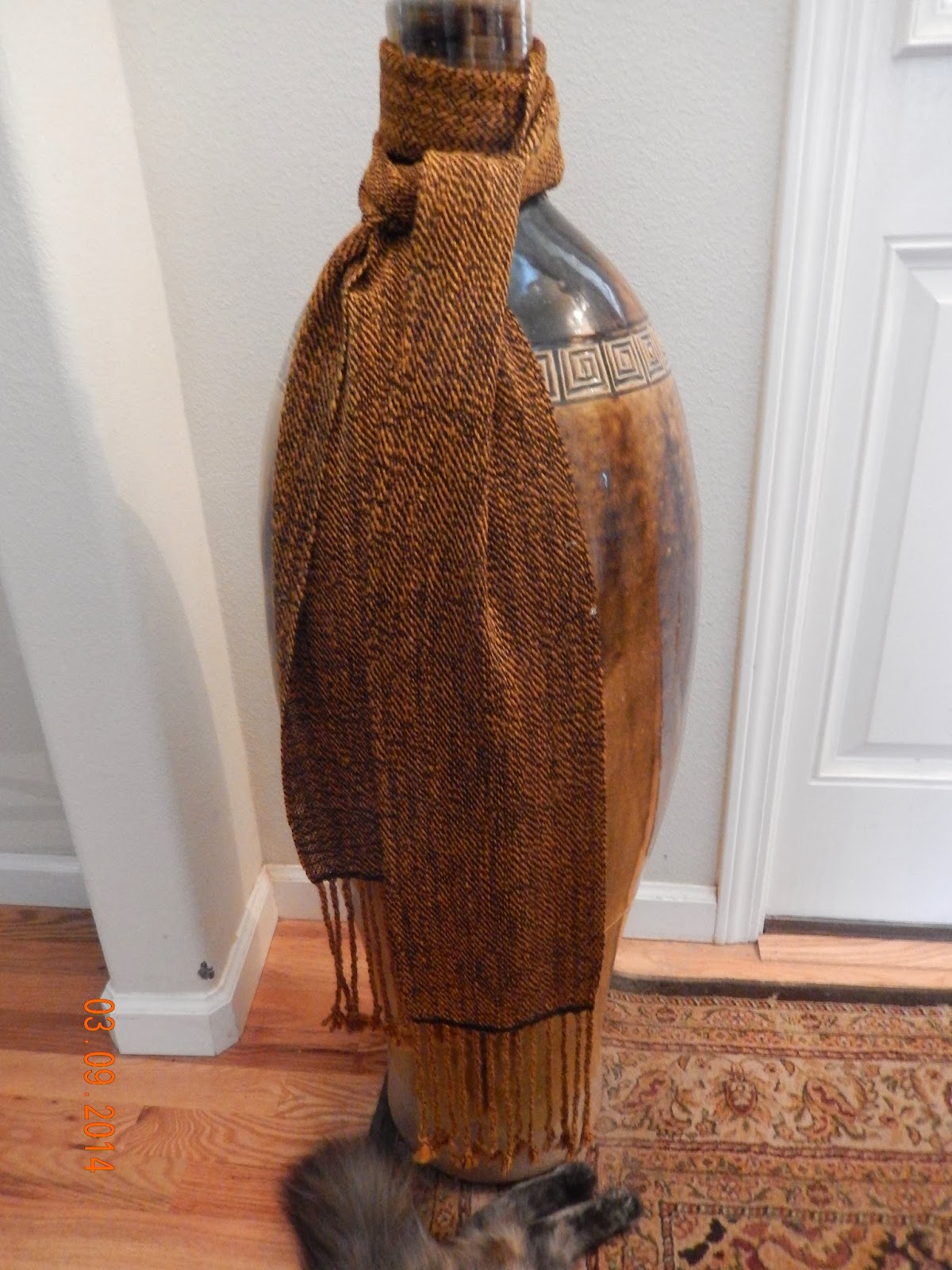 The scarf is finished and I absolutely love it.  I have come realize that patience is required throughout the entire process because it a scarf isn't a scarf until it's wet finished. It looks horrible until then. After a press on the mini mangle, it's an entirely different thing.  Between the alpaca and tencel, this is all about drape. 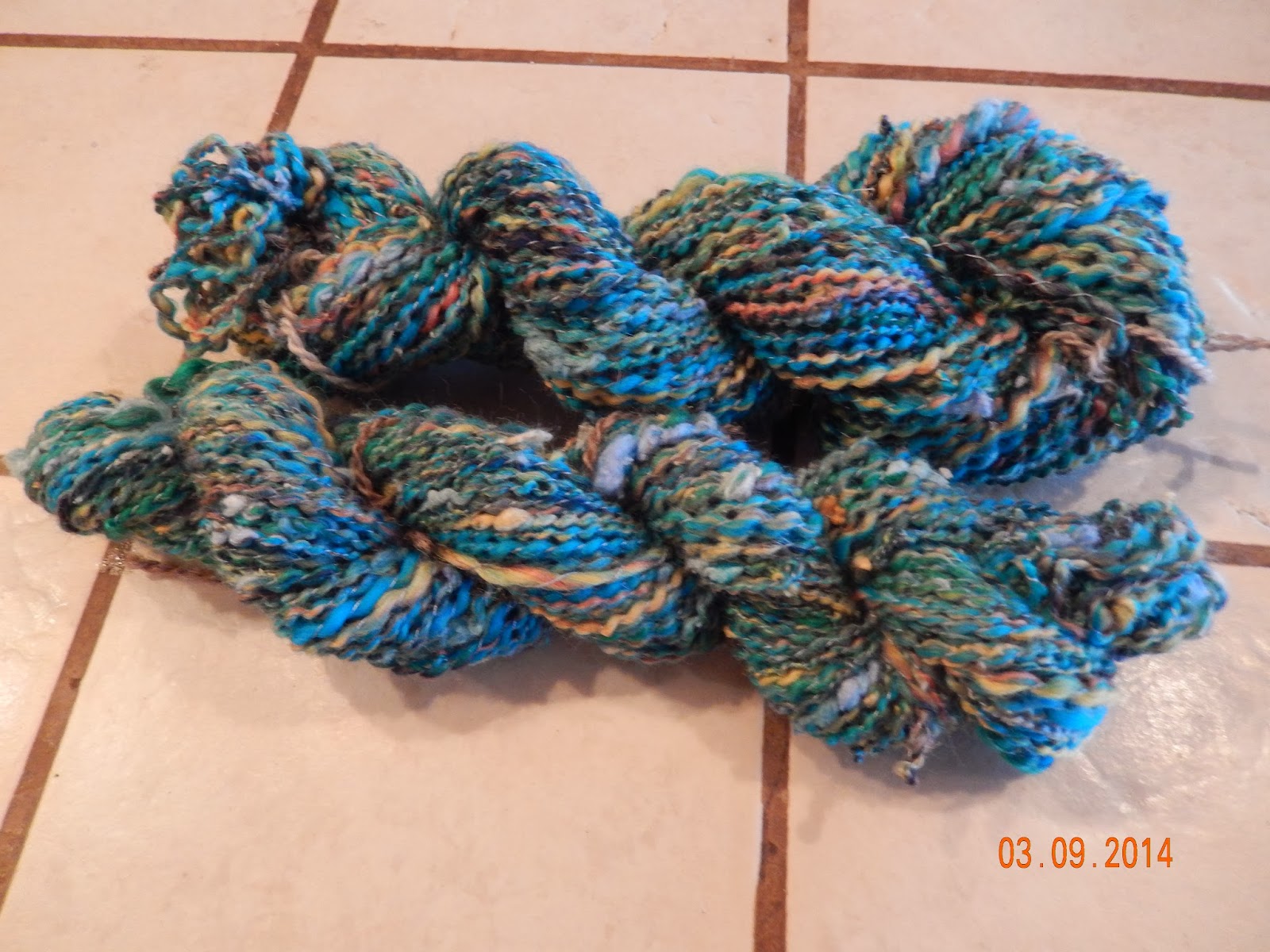 I finished spinning the last of my blended batts.  I don't have a good color to use as weft so finally took the time to put together an order of weaving yarns.  When you order more than $200 from Yarn Barn of Kansas, you get a 20% discount which saved me over $50.  I ordered teal tencel for the weft on this and I'm sure I'll use it for other things later. 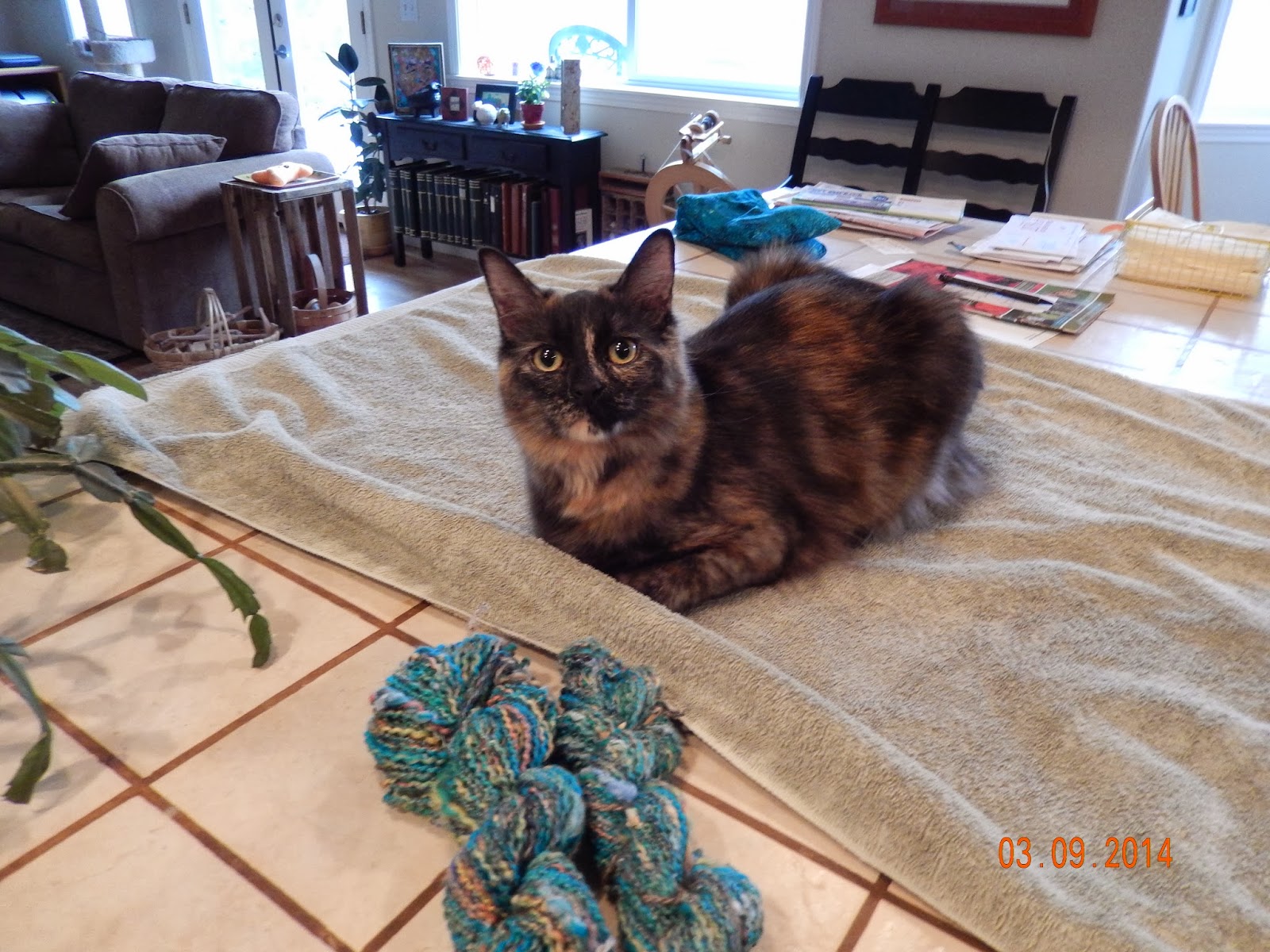 Maddie discovered yesterday how to get up on the counter.  I was sitting there, eating breakfast, when suddenly she hopped up on the stool next to me.  She sat next to me for about five minutes and then curiosity got the best of her.  As you can see, nothing will ever be safe again.  I was trying to full my yarn and she wanted to help too.  Actually, she's fussed at me all morning to go up and work in my studio.  I've made it a routine to weave mornings and if I don't get up there as soon as she thinks I should, she turns into a complete feline nag.  She goes up to the balcony, sticks her head through the posts and mewls at me.

I don't have time today to start anything as I need to get ready to leave pretty soon.  Today is Tommy's memorial, or Thomas as his family calls him.  I'm stuck in time as he was just a boy when I last saw him.  It hasn't even been a month since he died of pneumonia after catching a respiratory virus, dead at 38.  He leaves two children and heartbroken parents.

Love your new header photo almost as much as the old one! I'm so sorry for your friends, Thomas' family. It can't just be me who thinks there's a lot more heartbreak these days….

Love your new header :)
Sorry to hear about your friend. We had a local man die in December of last year after contracting H1N1, he was younger than me, and pretty healthy otherwise. Scary stuff :/

So sorry about the loss of your young friend. There has been a lot of loss here this winter, but not to such young ones.

It's amazing how much Maddy's antics are like Jazzy, our torty cat. Does she "talk" as well? dh thinks it's funny that the cat and I carry on long conversations....I say something to her...she makes a vocalization that sounds like a response....and so it goes for awhile. If dh and I are standing while talking, she stands in between us and puts her 2 cents in....which can be annoying. She doesn't do that if we are sitting and talking.

She also thinks I should sit down in the middle of the afternoon so she can have a lap nap. Can be quite the nag about that.

Nice job on the dyeing. Your colours are superb. They so remind me of warmer weather and wonderful things like flowers, grass and summery skies. With another snow storm about to roll through, it's a lovely sight. Maddie sure seems to be a charmer.

I follow your blog fairly frequently, though I haven't left a comment before. But I've looked nostalgically at the little cat being naughty on the loom ... I'll miss her (as I'm sure you still do), though Maddie has certainly earned a place for herslf!