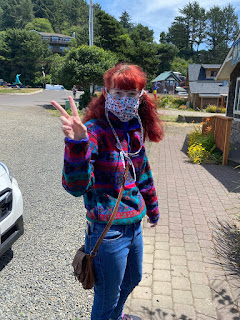 Alexia said goodbye to us this morning after nearly six weeks.  I miss her already but the quiet is nice this afternoon.  Her parents came on Monday, the day after we got back from the coast.  They spent the first night in a hotel which was a real treat, just the two of them, no kids.  They have worked from home since March, calling their small patio their cafeteria, their place to take time out.

This is the first time my daughter and son-in-law have stayed with us.  Usually they stay with her brother but they have a full house.  It was so nice to have five days of visiting, mornings on the patio, talking.  Bend has had a serious uptick in Covid-19 cases since the 4th of July.  They're putting more restrictions in place, but the kids met in a video arcade when they were in college and spent a whole day in the one we have here.  It's really not too hard to space those arcade games six feet apart.  They said everyone wore masks.  Too bad it took a month to figure that out. 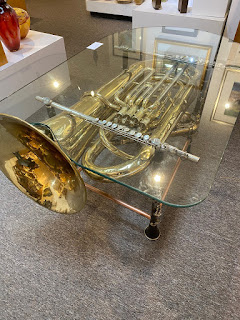 Lexi and I took a trip to see a group of Yachats galleries after Joe Winter mentioned one of his potter friends shows in Earth Works.  He told us to say hi to Steve but it wasn't Steve's day to work.  We toured the gallery instead and got the biggest kick out of this coffee table, only $4,500 for the discerning collector.  We did find one of Joe's huge pots with wooden handle, recognized it from across the room. 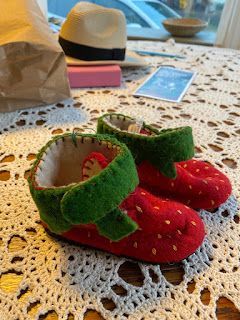 We both spent money at Touchstone Gallery.  She bought a hand-dyed silk scarf to wear in her hair and I bought these little booties for Delaney. 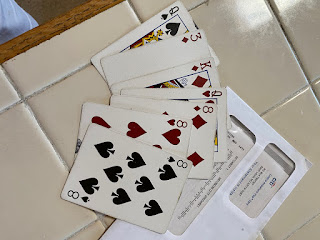 She and I played Crazy 8s every night, sometimes until 10:00.  She actually dealt me this hand and I took a photo to show her later.  Yes, I won that round. 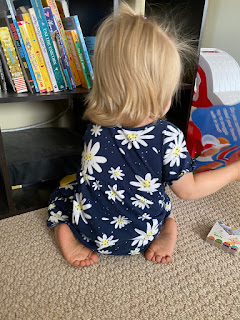 Monday Matt and Julia invited us up to Redmond for kababs from their new smoker, another nice time with family.  Delaney needed some time out with her books, something she does periodically.  She loves to turn the pages and hasn't ripped one yet.  It's those little toes that captured my heart. 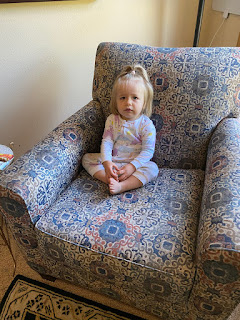 This is the sad face of a little girl who has molars coming in.  She climbed up by herself into the chair but it was soon clear that it was time for baby Motrin.  She has taken some steps but still prefers to crawl.  August 3rd she will be 16 months old.  Wouldn't it be nice if we woke up tomorrow morning to the announcement that a vaccine is ready and available???