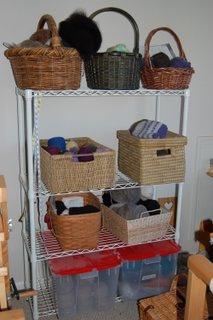 A couple of years ago we were chatting about a fiber market and I was horrified to hear Allison say, no thanks, I’m not buying any new fiber this year. I had never heard anyone say that before. But about a year and a half ago, I took stock of my out-of-control stash situation and decided to implement some serious reduction. I only bought a black Shetland fleece and some black alpaca, but that’s necessary. The hardest place to start was the odd balls that were off-gauge from anything else or just simply badly spun. This was my work, but I decided that I had provided storage for them long enough. Balls that had promise found their way into Guild white elephant sales, some I gave away, some I threw away. Does this give you the idea that I spin without a plan? I wouldn’t deny it. There are also the mouse-proof bins and boxes in the garage of my precious fleeces in various stages of preparation. 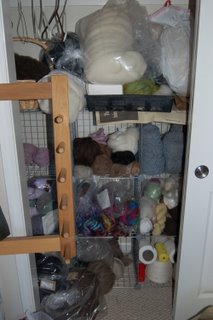 I have managed to assemble a basket of one-balls that are compatible in gauge, and many have been turned into hats. Hats are such instant gratification for experimentation, but I’ve begun to wonder how else I can use the yarn. The good news is that the storage cubicles in my workroom are once again usable. I can see what I have – very nice. For the last couple of months I have been congratulating myself on my discipline. Then I decided to buy a grey fleece after Mim sheared, since we don’t have grey sheep and I used all that I did have in the commissioned sweater. Neighbor gave me a black Cormo/Corrie that I can’t process on my Deb Delux, so I sent both of the fleeces off to Morro – out of sight, out of mind. Then Laura visited and I arranged to buy a CVM fleece from her. I felt it was significant to purchase a fleece from her new flock, since she deserted us for to fulfill her dream of being a shepherdess. Then the final straw. Mary called me one morning last week. She was loading up to drive to and would be making a side trip to Brown Sheep – did I want anything? We have talked about a fantasy trip to Brown Sheep for a very long time so my pump was primed. I said sure, use you good judgement and whatever space you can spare in your car. She thought that she could accommodate a couple of pounds. I’ve just about run out of the Brown Sheep combed top that I use in our dye days so was thrilled to restock. She brought back a little over two pounds of top that had been cut from the mill. It looks funny with the blunt ends, but it will spin fine and I pretty sure it’s wool/mohair – very cool. 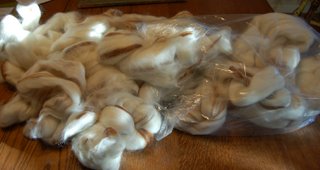 Then Mary called me yesterday to say that Brown Sheep had charged us top dollar for seconds and they would make up the difference in fiber – what did I want. I said a pound of silk and any undyed combed top to make up the balance would be fine. This morning I had an email from Mary saying that I had about five pounds of fiber due me, less shipping. Those storage bins that I was so proud of – this development could be a problem.

The top looks just lovely... have you climbed back up to "SABLE" yet? I did get more ruthless in the past year about whether I was really going to use something or not, but there's still a lot of "somethings-in-waiting" around here!