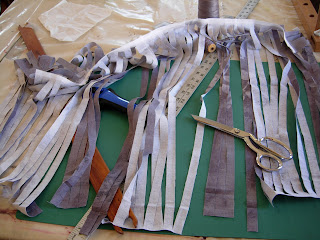 Nisha says that she weaves to sew. Sewing is her first love. Her grandson is going to the Olympics in Beijing and was weaving the cloth for her Beijing Jacket. She cut fabric into 1/2" strips, did one shot of the fabric, followed by one shot of a novelty yarn in the same color harmony. 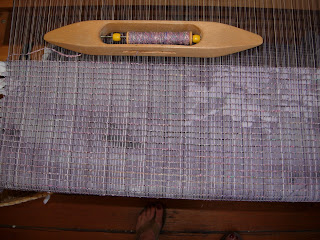 You can see that the subtle floral pattern in the fabric is preserved in the weaving. Please check out Sara's blog for more of the retreat and to see Lisa's astounding Nuno silk. Sara called it Golden Days, which they truly were. 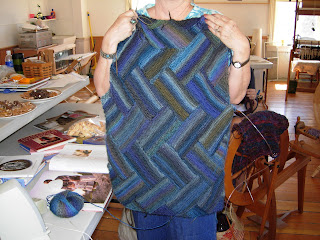 Ginger was my roommate. We hadn't met before but found our roommatemanship to be very compatible. We weren't allowed back into the studio after 10:00 because of noise to the rooms below, which is really bad if you're using a floor loom. So we visited, checked our emails and then read for a while which ended up being midnight. I only stay up that late at New Year's. It was like girls camp, but even better. She easily created this fabric while we all kibitzed, but she wasn't following a written pattern. She was making it up as she went. Later she sat down to write it out. It's going to appear in the winter issue of Knitters. Too much math. 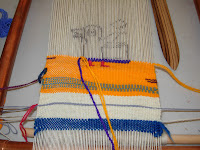 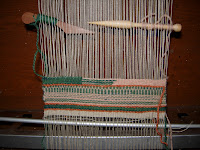 Allison and I were trying to do independent study on tapestry. She made the pipe loom she was using while we were there - impressive. I used the warp already on my Mirrix
but unwove the old project. I'm working through exercises in Kirsten Blasbrook's book which I got from the library but am ordering it from Amazon. I'd like a little more experience in making mistakes before I actually look for a class. 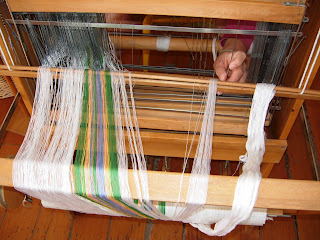 I love this shot of Linda warping her loom. The threads are so tiny and, oops, there's her hand. She just bought this was used loom and was disappointed to realize that she hadn't brought the beater bar, but since you don't need one to warp from back to front, she pushed on. 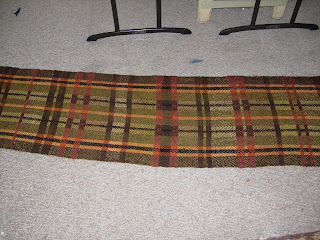 This is Eileen's shawl. Her local guild spun the yarn, dyed it with natural dyes, wove it and gave it to her when she was diagnosed in the early stages of breast cancer. The shawl is a demonstration of their love and support. I think it's a statement of the power of our relationships.
Posted by Sharon at 7:53 PM

What inspiring photos! Such a lot of great things going on. Thanks so much for sharing.

What a wonderful variety of beautiful projects! Sounds like a great retreat.