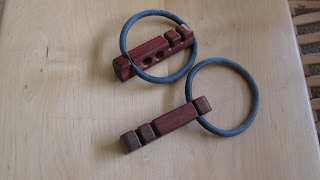 I met Melissa at her coffee shop before our Wednes-
day knit group. The plan was to drop my car there, go for Pho (Vietnamese food) and then on to meet with the group. She wanted me to see what she had on her loom so we went by her place, and, well, you know how conversations with fiber folk meander, she showed me her lease sticks-ish things. These are they, and since she had a spare pair, she gave them to me. 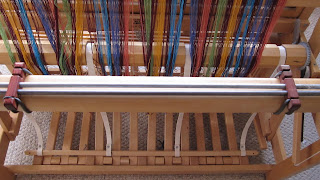 Oh, and as we left her place we realized that neither of us had copied down the driving directions to Malinda's house so back we went to the coffee house to print them out, which is where we ended up eating lunch. Anyway, this is how these little gems work. They're for warping front to back. 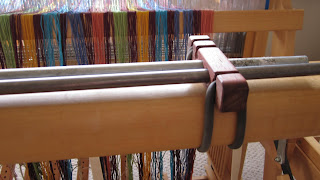 I cannot wait to test drive them. The cross goes in the middle but is elevated so the threads aren't compressed against the front beam, something I struggled with on this warp. My warp is now tied on, with threading and sleying errors fixed. Ironically, my weaving guild Christmas party is tomorrow so I won't get to start weaving for a day or two (frowny face emoticon). 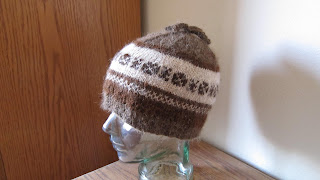 I finished another yet hat for the craft fair next weekend. I'm guessing of course, but I think the best chance of alpaca hat sales are out here where people are outside in the miserable cold. If I'm wrong, I'll have a lot of hats. I tried a topper with four i-cords. I hated knitting it and don't think it's worth the extra work and won't do it again. 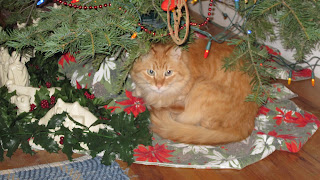 Charlie loves the Christmas tree. We ship all our presents anymore, so there are no packages beneath the tree. I've put a beat-up nativity set at the base in front and left the rest to him. I almost feel bad that he only gets this for one month a year. He's knocked over several of the pieces and broken them, yet again. I made it in ceramics when I was a military wife with a one-year-old daughter. Does that tell you anything about me?? Mary's hands are glued on and baby Jesus has none. I don't think any of the animals have ears. After 40 years, I really do need to shop for a new set.
Posted by Sharon at 9:44 PM

One of our cats loves to sleep under the tree, I have some really nice pics of him; he's snow white so the effect is nice. Another loves to play with the ornaments, every morning between putting up the tree and taking it down we find a glass ball or two rolling around the living room, sometimes not so much rolling as just sitting there shattered. This is why I buy cheap balls. She has fun :)

The lease stick holders look like a great idea, but do the round lease sticks come with them? No reason they can't be used either F-B or B-F for the beaming anyway. Threading might present a bigger challenge as they would be so far back from the heddles using them back to front, but no doubt one could figure that out. Has your cat ever tried climbing the tree? ;)

We have not put up a tree since we got our Boxer Lucy. I am getting nervous that she will eat the bottom half ornaments. Hopefully we will get the tree up this week and she will behave. I am thinking that putting the good ornaments up higher on the tree would be a good plan. I don't know though! We mail all of our gifts every year too. Seems like more and more families are spread apart. I know we are because of the military.

I saw your hat, and just said, ahhhh to myself!! Wonderful!! I guess you can tell that I love to wear hats and that one is a 10+. I hope that there are a lot of outdoor people at your craft sale, as they should just snap up your hats and treasure them.

Great photo of Charlie! It sounds like the nativity set has such good memories for you who cares if it's glued a bit :-)

I don't imagine a few broken bits changes the sentiment of a loved nativity set. Our cat pays no attention to the tree whatsoever. I like the lease stick holders. They look super handy.

Oh, Oh, Oh - I want some of those! I always warp front to back,and hold the cross in my hand - it works, and goes quickly, but I think for beaming having it held by mechanical means would really be a help.

Do you think you could take the dimensions down for me? I could probably make some. Better yet, find out where she got them, and I'll order a pair!!

Those lease stick holders are so cool! I usually tie mine to the backbeam which sort of works.

Charlie is so cute. Does he like to drink the tree water?

I want a set of the lease stick holders, too. Where did she get them?

Yes, it is time for a new nativity set. Maybe you could knit them?

Wow I love the lease stick holders!
Karen in Wisconsin

Oh Charlie, that is one cute picture. The hat looks great. Best of luck with the craft fair!