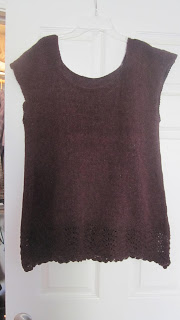 I finally finished the Penelope Blouse, pattern by Oat Culture.  The pattern was a gift from Barbara Sue and the yarn was a gift from Theresa at Camp Runamuck.  She had offered stash yarn in return for a donation to SPCA.  She must  have sent close to two dozen skeins.  The pattern for this tunic called for the yardage of five balls, but I didn't put the lace on the armholes so barely used the 5th. 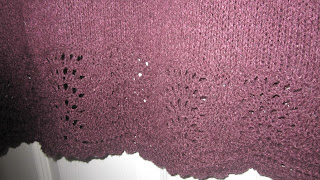 I love the lace detail on the bottom.  The color is so dark that photography is difficult.  The yarn is wool and silk so the fabric drapes nicely. 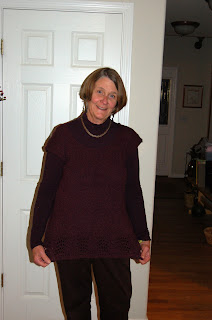 I wore it to book club on Tuesday and I know it looked good because people noticed it and commented on it.  I've always been sensitive about people knowing I made something since I grew up in obviously homemade clothes.  But this time I know the sweater earned the praise.  Thank you Barbara.  Thank you Theresa.  I've cast on the denim blue yarn and will use tank top shaping this time.  Ian drove me to book club.  I still can't drive until this weekend and it's my 4th day without caffeine.  I don't recommend it. 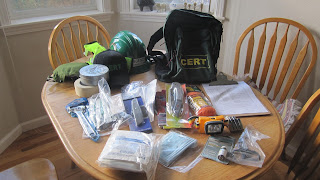 Meanwhile, life moves on.  Monday night was the Red Rock Rattlers CERT team meeting at the fire house.  We are growing as people recognize how far our valley is from anywhere.  I'm a team lead for 2013 and as such have now been supplied with an amply stocked backpack, as you can see.  One of the things I needed to do today was go through the contents and check the items off on the inventory list.  All present and I even got everything back in the bag.  I need to spend some time getting familiar with the contents, but not today.  Laundry would not be put off. 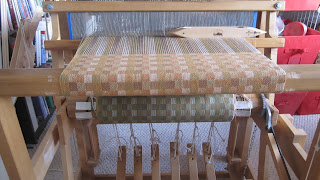 I have come to think of weaving dishtowels as equivalent to mindless knitting.  It's so soothing to sit down and weave for an hour and have a zen moment.  One of the ladies from my book club emailed me for more dish towels.  She bought a couple at one of the craft fairs and loved hers - wanted to gift some.  From the 120 I have woven since May, I've sold 110.  They just took on a life of their own.  I gifted three so the seven in my Etsy store are it, until I pull these Harvest Field towels off.

I just ordered the Singer Fabric Steam Press from Costco.  I was reading Costco Connection this morning at breakfast and thought, that's exactly what I need - a mini-mangle!  One review said they used it to press saris - has to work for towels.  I had just enough in Paypal to cover it and it will make my life so much easier.  I'll be able to press the towels in an instant.  As it is now, it takes forever and they're still not wrinkle free. I know they'll become like chamois but wrinkled towels are not a good selling point.

And I had an email from Shirie.  I'm going to new employee orientation Monday morning, which gets me one step closer to being in school libraries.

You look fantastic in that photo – I think being caffeine-free agrees with you!

I'm in awe of your production! I've made 2 hats this year...

I love the sweater/tunic - the "over-tunic" look agrees with you!

I love the tunic and it looks great on you!

That is a huge amount of towels. You are a weaving machine! I love the new sweater. It is very flattering.

I'm so glad you're on the mend! Good luck with the job. I agree that weaving is like "mindless knitting." I'm in a plain-weave kind of mood myself!

Anonymous said...
This comment has been removed by a blog administrator.
1:43 AM

Anonymous said...
This comment has been removed by a blog administrator.
1:48 AM