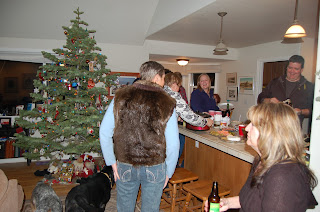 Christmas Eve was the smallest crowd we've had, possibly because of the snow?  That didn't diminish the enjoyment for those of us who came.  It was a nice mix of family and friends.  The lady in the foreground is a neighbor we've recently gotten to know, both she and her husband, while walking dogs.  She had bought a pink scarf for her niece, then during the evening asked if I had any more.  She wanted one for herself.  She bought two scarves and five dishtowels, which was totally unexpected but welcomed. 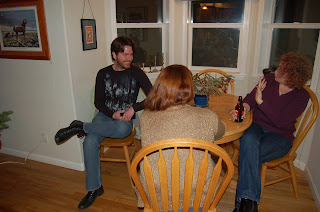 Chrissie's friends from high school, now married with a daughter Alexia's age, joined us for the first time this year.  The girls were dressed to the nines and upstairs playing when I was taking pictures, so the only picture I have of them is in my head.  Kicking self. 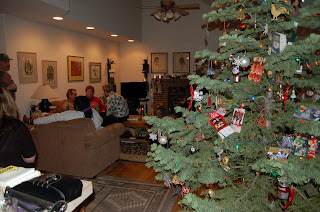 When we lived in town, Christmas Eve was mostly family with a few friends, but in the ten years we've lived here some family have passed on and others have moved.  Now Christmas Eve is some family and mostly friends who have become like family over time. 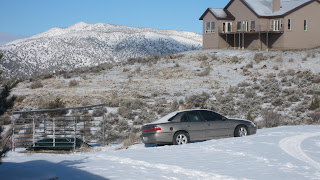 The only straggler is this Cadillac.  It wasn't having anything to do with our icy driveway.  There might have been an element of driver error, given the state of the driver :)  They caught a ride home with other neighbors and are probably better off for that. 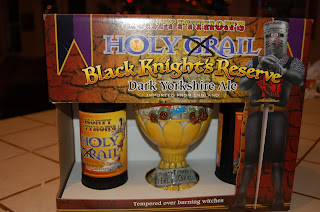 We stopped exchanging gifts years ago but DS Matty found this last month and couldn't resist buying it for me.  I'm a huge Monty Python fan - even got to see Spamalot while we were in the New York one year.   He knows me. 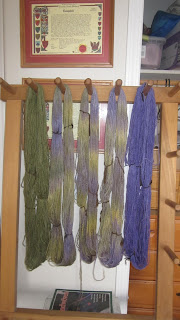 I dyed some yarn last week.  It's hand spun from our Shetlands who are now mostly white.  Most of the hats I've made in the past couple of years are from our sheep.  I was getting this ready for trip knitting for our SoCal trip this weekend.  I awoke on Christmas Day with a full-blown head cold.  No trip to town to see Lincoln, no dinner at our favorite Pho restaurant afterwards.  We rented the second Sherlock Holmes through Apple TV and called it a day. 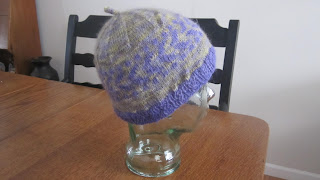 I hadn't intended to knit a hat but my eyes were too tired to read much so I've finished the first one.  Today is the third day and I'm starting to feel like I'll live.  Lots of rest, water, oranges and hot tea.  I even ate impossibly spicy salsa on the first day.  It was painful but effective in opening up my sinuses.

So it's time to start the laundry, get the suitcases out and strategize our trip.  Because of the weather, it looks like we'll have to drive to Fallon and then south to Bishop, missing all those high mountain passes.  The only pass that way will be the one at Boundary Peak.  It won't be nearly as scenic but it will be much safer. We'll pick up Alexia on our way to town, get the rental car and leave ours with a friend.  That's the plan at the moment.  This is my last post for 2012.  I'm leaving the laptop here.  I wish you all a Happy New Year!
Posted by Sharon at 11:09 AM

Praying for your safe return, my friend!

Have a save trip.

I love the yarn and the hat. Have a wonderful trip and we'll catch you on the flip side (lordy, those years of growing up when CBs were all the rage is catching up with me.) :)

Safe travels...your area has been much in the news for weather this week.

Also..hope you feel better soon. This is a bad year for viruses and secondary infections. Ask me how I know...

Have a fabulous trip. Will be looking forward to a new set of photos! I love the new hat with the soft colours. Very pretty.

pho,sherlock holmes,monty python,good friends and yarn! those are all of my favorite things:)wishing you a happy new year and safe travels.

Merry Christmas and Happy 2013 to you and all your family. By now I'm sure you'll be feeling much better.