'Tis the Week before Christmas 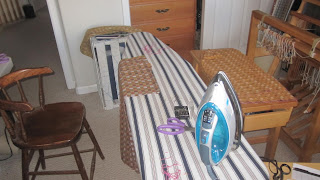 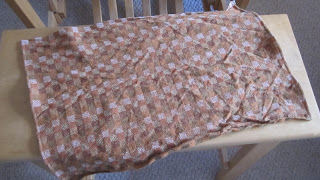 This is what the towels look like before I wet finish them with the steam iron.  It's a tedious process so I'm waiting for my mini-mangle to arrive to finish the rest of the towels I've woven. 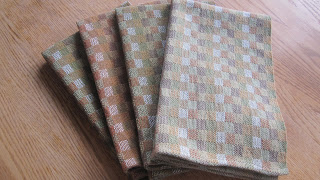 The lady who had originally ordered towels in this colorway never got back with me so I sold them at a craft fair.  Then last week she emailed me about "her" towels.  Fortunately I had rewarped and was on the last towel.  I figured since everyone liked the colors I should do them again.  These are the ones I shipped off to her. 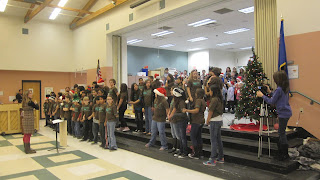 I subbed twice this week for my friend Vicki who wanted to attend her daughter's college gradu-
ation.  The week before Christmas is rough and her third grade kids were pretty rambunctious.  I had playground duty that 22-degree morning.  The girls had worn party dresses, tights and pumps for the performance and were popsicles. 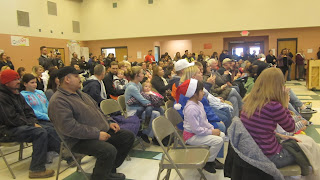 People seem to think that parents of ESL students aren't involved in their childrens schools but there was SRO in the auditorium and it was stifling.  I think of Vicki as the stagecoach driver.  She's got the reins on all those students running through her fingers and she keeps them humming along. 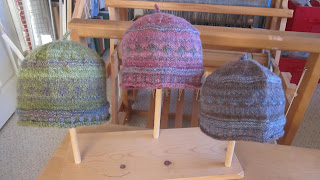 I got home and sat down with my laptop to zone out for a few minutes and discovered that I had sold these three hats in my Etsy store.  They're going to Sharon, MA!  The buyer asked if I would be willing to go to the trouble to expedite shipping - she would pay. So I drove up to Doyle this morning and got them off - $33.20 for Express shipping!  They'll be there on the 22nd. 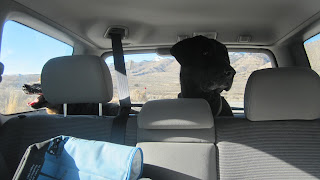 Sammy has never ridden in the back of the car.  It wasn't feasible with three dogs but I realized today that I could take the two dogs with me.  Sammy was a wreck.  She was sure we were going to give her away.  Even after all the time she has been with us, she's still insecure.  I played music loudly and it did help some. 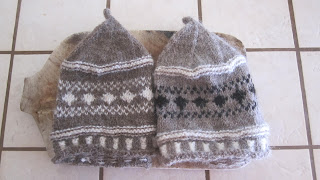 I only have natural colored hats in my Etsy store and haven't done much dyeing lately.  I decided to overdye these two and use them to replace the hats that sold. 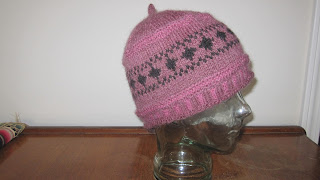 I overdyed the lighter hat in raspberry. 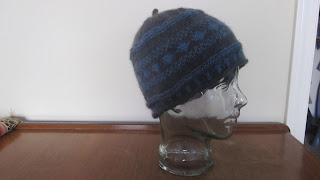 I overdyed the darker hat in teal.  The hats are more interesting when I space dye the yarns so will do some of that tomorrow.  Today was recovery from two days with 23 excited third graders.  When these dry I'll take photos and put them in my shop.  Maybe I'll knit hats on our trip to SoCal in two weeks.  Or maybe I'll knit them this weekend.  We're supposed to get a foot of snow and I'm sure that means the power will go out.
Posted by Sharon at 3:19 PM

You've been busy!!! I'm glad you had successful days in the classroom. This time of year can be too much fun!!!

The dyeing does make a difference to the look of the hats. The ones you sold are lovely. I'm going to have to try your tea towel draft soon as it makes up a lovely pattern. Once my spinning homework is done, it will be good to get back to some weaving.

I found that after a couple of trips, Dozer got MUCH more confident, once he realized he always gets to come back HERE, with is forever family.

Hats and towels are beautiful!

Faysal said...
This comment has been removed by a blog administrator.
11:47 PM

Congrats on the sales! That always comes in handy this time of year.

I assume school is out now for the Christmas break?