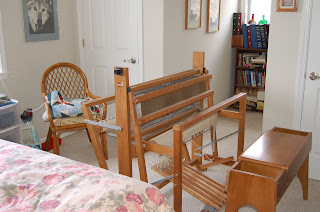 I have had a lot of things on my to-do list for a really long time and I thought I'd knock a bunch of them off on our staycation. I quickly realized that I was missing the point of being on vacation in the first place.

I really wanted to get my LeClerc Artisat assembled. Here it is, and since this is our spare room, my plan is to fold it up and slide it into that dormer area behind when guests come. I paid for a loom and bench, and I received in addition two boxes of books, a warping board, an inkle loom and one very very large box of odds and ends of yarn. The yarns were materials and bright colors that I knew I would never use. I was thrilled to adopt them out to my friend Virva, a weaver from Finland who loves color. Have you ever know someone from a Northern Climate who didn't?! I'll share about my new weaving library another time. 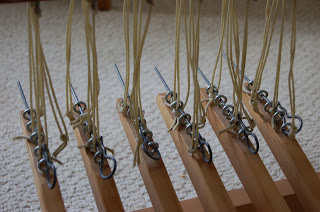 And look at the simplicity of this tie-up. I have only woven on Gilmores so I didn't know it could be so easy. I haven't even put a warp on this loom and already I'm planning on trying other tie-ups on it. 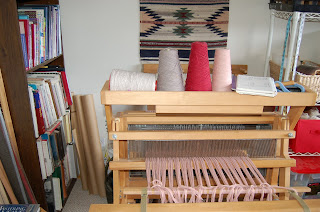 I also finished getting this 24 epi warp on my 24" Gilmore. Oh, funny - I just realized the epi and loom weaving width are the same. I have mostly woven at 8-10 epi, so this was a whole 'nuther experience - lots of little threads and they seemed to multiply as I worked. I was thrilled to only have three threading errors.

I bought these partial cones years ago at a weaver's sale and I have no idea what to expect. I used the Ms and Os threading and tie-up from the Weavers Companion, but when I looked at Sharon Alderman's book the other day, her threadings and tie-up are different. This assures me that I have no idea what I'm doing or talking about most of the time. After crawling around on the floor to change the tie-up, I became married to idea that when this warp is off, I will restore this loom to standard tie-up and for ever after amen, the Artisat will become the loom of "other." 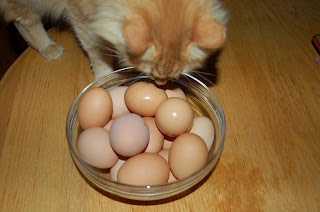 Fixin' to make deviled eggs for the guild retreat.
Posted by Sharon at 2:47 PM

My LeClerc Nilus has the same tie up Sharon, one of these days, I may just use it! lol

This is getting exciting, Sharon! You're one step closer to warping up and having both looms going. Don't you love choices of what you're going to weave today? Bored with one? Go to the other loom. Just like having two or more knitting projects going.

...and I have no idea what your talking about but your new loom sure looks nice.