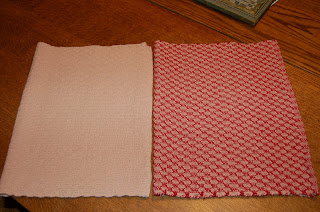 Done - with most of this being on the learning curve. Leigh said the pattern would pop with wet finishing. I think my wet finishing wasn't the one she had in mind. With the distraction of babysitting, I cut the cloth off, ziz-zagged the pieces on both ends and the middle and threw them in the last load of laundry - the towels. They're finished all right. Another time, I would hem stitch first, then wash. I had a little trouble with the ends 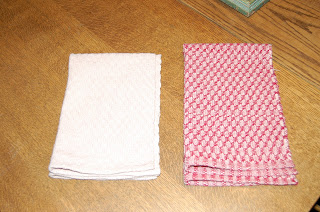 They actually looked like dish towels when I folded them and that's where they are now - in the drawer with the others. I cannot believe how much I like their feel and I'm looking forward to correcting my mistakes on the next towels. For one thing, I warped first, then decided on size - won't do that again. Also, I didn't calculate my own sett but relied on a chart - won't do that again either. And after having my too heavily-weighted floating selvedges break - they both broke - I know that I'll use them again. Alexia crawled all over me and the bench as I finished the second towel. Gwamma - what are you doing? Weaving dish towels. Why? I don't know. 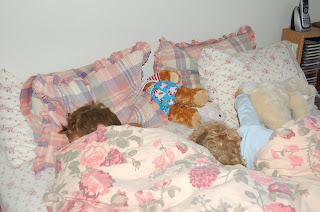 The morning after~
Posted by Sharon at 9:24 PM

They look beautiful to me - and you know that I am a fine judge of dish towels. ;-)

And I love your dishtowels! The hems came out great. The wonderful thing about weaving them is that they are still useful, even with things needing to be corrected. And mine have worn really well after repeated washings and dryings. Much nicer than my store bought ones.

They look great to me! M's&O's isn't one of my favorite weaves because it has no plain weave shed. But it is possible to get some interesting effects in the way threading and treadling are grouped.

I truly admire you weaving while the wee ones were there!!

Nice job! I still dont get all the size lingo, someday I will take the time. I hold all who weave with any knowledge of what they are doing in high esteem!
Sharon, I bought some old bobbins years ago, I have seen others use these things as selvedge weights, I will try to get some to you. They work out well from what I ahve seen.

The towels are lovely; kids are cuter :) Biased much?

The towels look fabulous and I'm sure they will be a pleasure to use.