Oh, and there was a barbeque 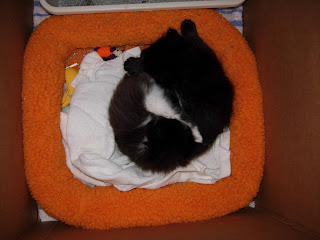 This fluff ball caused quite a stir at son Josh's work two weeks ago. He was unloading a shipment on the dock that had come in from Anaheim and was moving some shrink-wrapped cabinets into a delivery for Lowe's, but he kept hearing what sounded like a kitten. He finally identified a specific cabinet but since he wasn't carrying a knife, he called to another guy to come over and listen and to bring a knife. They both were sure they weren't hearing things and sliced off the wrap, opened up the door to find two very tiny kittens. 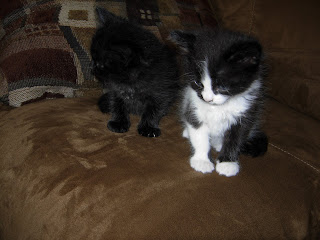 The kitten doing all the protesting was the small black one. The black and white kitten appeared to be dead. The shipment from Anaheim takes a full day and who knows how long they had been in that cabinet. They bought milk from the vending machine and made a eye dropper of sorts from the shell of a ball-point pen. By this time a number of the staff were engaged, and one women went to a store for an eyedropper and formula. The kittens are so frantic for food, that DIL Missy says she still has to hold their heads to feed them because they cast about wildly in search for food. 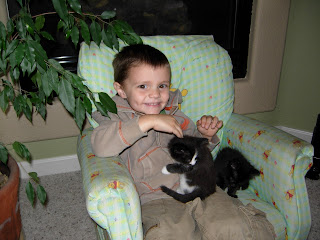 Today was Josh and Missy's end of summer barbeque, and to prove it, the weather cooper-
ated with rain. This is cousin Luke with the yet unnamed kitties. They haven't been to a vet or been sexed so the names will have to wait. Luke loves kitties, but I bet you can tell that from his ffom his face. 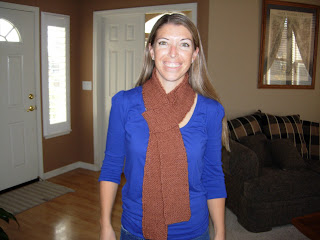 This is Missy's first knitting project ever. She started on it at our Gathering last month and today we bound off and sewed in the tails. I am so proud of her even stitches and selvedges. It truly gave me goosebumps. I brought her some cotton and a pattern for a diagonal washcloth. I cast on the four stitches for her and then she took it from there, including her introduction to yarn overs. But then I told her that I wanted to switch her over to continental knitting. She took right to it. It gave me goosebumps again. She grew up watching and listening to her grandmother knit. The time was right. She was a knitter all along.
Posted by Sharon at 7:21 PM

Ahhhhhhhhhhhh, kittens! Luke looks like he is in heaven. Missy did a great job and what a giant smile she has!

What good hearted and talented offspring you have! Oh...and good looking too!

But you can't take credit for the cuteness of the kittens! (smile)

Do you think someone did that on purpose? It sounds like it to me, but then we are the (erstwhile unwilling) owners of throw away kittens. I just have never understood how people can dump kittens and leave them to die.

What a story! I'm so glad they were okay. Please tell Missy that her scarf is great!

OH, I LOVE kitty cats! They're adorable! Sharon, you do the nicest caps! They're beautiful!

Wow! Amazing story about the kittens -- so very lucky to have been found and now to be adored.

And good on Missy!

Tell Missy that she should get a kitten milk replacement product at PetsMart or from a vet. They can diget it better and it's made specifically for them. I would also have a vet look at them right away to find out age and how to feed them properly. Poor little guys! I hope they got some colostrum from their mama before being in this predicament! Bless them for caring for them!

What praytell is Continential knitting?