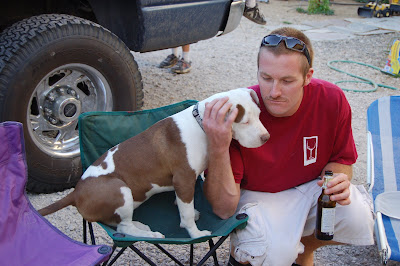 This is my youngest son Matty with his dog Bacca. He has socialized her very well and she is just a great dog. I took this picture at The Gathering two years ago. Of my three children, Matt is the one who most looks like me. You know what a crap-shoot family resemblance is. 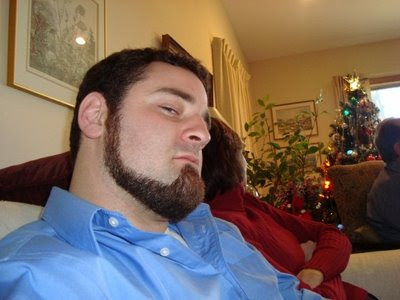 If you didn't have me to tell that these photos are not of the same person, would you know it? This is a photo that I scalped from oldest grandson John Paul's Facebook album. Whatcha think?

It's been a loaded 36 hours since John's mother sent the first email. Thanks to Facebook, he first connected with Chrissie, my daughter and his birth mother, and by noon I was able to FB live-chat with him for about an hour.

Can you just begin to imagine how this must be from his side of the plate?! He stumbled after a couple of chat exchanges and apologized, saying that he had only learned of us a half hour earlier from his dad. His parents are so wonderful. Chrissie made a bad turn when she chose to go to that party, but all the turns have been good since then. I believe that my oldest grandson is a blessed man and certainly a very loved one.
Posted by Sharon at 4:01 PM

It must have been such a shock to him to know that you guys were all there just waiting. I know you must be so excited as well as your daughter. It's great that his family didn't try to keep is apart from you. Best wishes for what's to come!

John is a lucky fellow to have not one loving family but TWO!

This story just keeps getting better and better. I know it's cliché to say but sometimes bad things for good reasons.
Heidi

What a great new dimension that's been added to your lives. I'm a bit speechless as I think these things happening are just wonderful when all parties are willing.
You're one lucky woman, Sharon. Who says retirement is dull? :) LOL

I still think it is the most wonderful news that you all have reconnected... that we have such opportunities in life, you know?