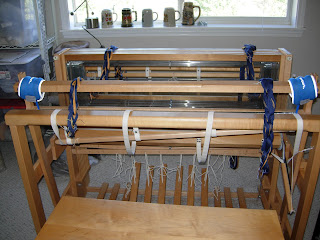 I'm finally getting around to winding warp for my blue jeans rug. I only have two tubes of blue so am working from the outside in. When I run out of blue, the rest will be orange. Julie at re'New mentioned that she put ankle weights on her beater bar so she wouldn't have to beat so hard. I bought three pound ankle weights at Target yesterday and strapped them on both ends. They seem to fit okay, but I'll just have to wait to see how they work. We were in town for Ian's doctor appointment yesterday. All his lab work was excellent but since they didn't point out the underlying cause, more tests have been ordered. He is starting to feel like he just might live and the doctor has assured him of it. 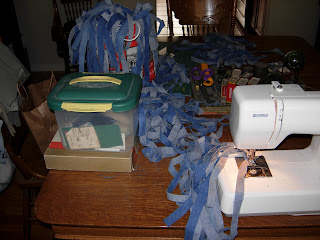 I sewed jean strips together this afternoon so I could wind them into balls while we watched the opening season of Project Runway. I am randomly pulling the strips from the sack to mix up the shades of blue. 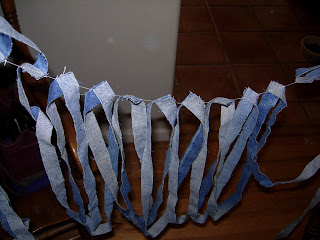 The strips look like like streamers or flags until I cut them apart and snip the corner from the seam. I had no idea that working with denim like this would be so dirty. Rolling the strips while sitting on the sofa is something I won't repeat. 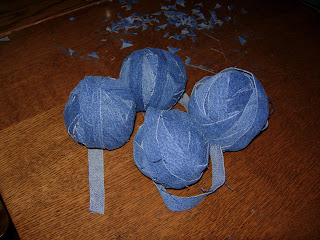 I'm really pleased with the variety of blues in the strips and I'm chomping at the bit to see what this rug is going to look like. We have our family gathering here in about five weeks and I'd love to have two more rugs on the floor by then. 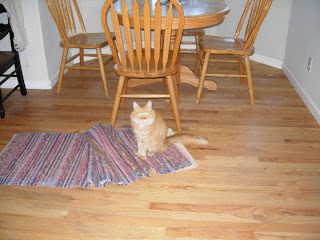 Meanwhile, Charlie has found a game he can play with this rug. If he runs at full speed out of the laundry room and leaps onto the rug, he can get a couple feet of slide out it. He's developed his own amusement ride and I hope the thrill goes away soon, because I'm certainly over it. 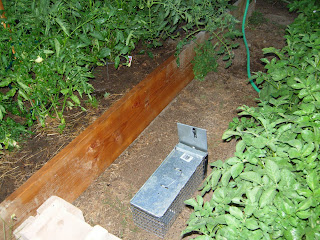 Something has been eating out of our garden and it's not us. Four days ago Ian set this "Have-a-Heart" trap between the tomato and potato boxes. Since then he has caught four pack rats and three squirrels. 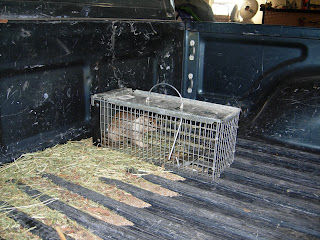 This squirrel got caught mid-day so Ian put him in the back of the truck so he wouldn't cook to death in the heat of the afternoon. When the sun sets, he'll take him down the road a couple of miles and release him.
Posted by Sharon at 10:08 PM

Rascal and Catzee used to love the sliding game! The bad news is, they didn't tire of it very quickly. Katy and Riley have developed their own version of rugless sliding. I saw them jumping off their little kitty stool, sliding on the kitchen floor. When I went to investigate, I realized the floor was wet! I wiped it dry, but a little later, there was Katy at their water dish, splashing more water onto the floor so they could play some more.

Sounds like that havahart trap is well worth it's price!

The ankle weights are a good idea, too.

LOL, yes, the sliding game is a universal one for both cats and dogs....
Oh, you're rug will be such fun in the blue and orange.
I have to be honest, I don't miss doing rugs at all. The prep work was endless. Good idea with the ankle weights. I would have just had Gene make a piece of heavy metal stock to fit the back lower beater and drill and bolt it into place. You're way there is no drilling involved.

Is that a squirrel or a marmot? Either way its so cute! Love those live traps, you can catch, enjoy, and release :)

So happy that Iran's test results are good!!

It's amazing what cats do for fun.

I agree with everyone else the ankle weights seem like a good idea.

Love denim rugs. I have one I'm twining on the frame now. I'm convinced that when you trap squirrels and take them down the road, they just come back and bring friends!

Yes the slide game is universal. Our cat also likes to hide her toy mice and ping pong balls under the folds of the rug and wrestle with them.

I used the weights on the beater for years. In fact Handwoven printed my suggestion in the tips & tricks column way back in Nov. '94. You might have to play around with their location and tighten them up a bit to your satisfaction.

You need to haul him more than a couple of miles away or you're going to be catching him over and over again - try about 20 miles away.

Don't you just love cats? Neil used to play with the space where an old brainded rug was coming apart and he had a ball with it.

I am going to make a blue jeans rug one day...

I join everyone in saying, that the ankle weight are a great idea! Velerie: I must have missed it when it was published in handwoven.
Our cat is far too quiet/lazy/old to play sliding games ;-)