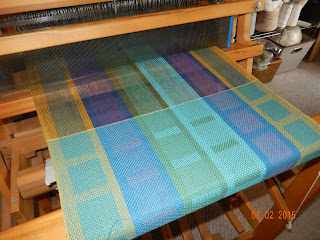 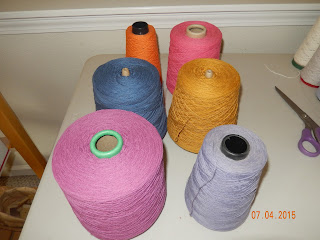 So I pulled together some colors for "desert sunset" since I did "desert sunrise" a couple months ago.  I'm starting to wish I had had my yarn order sent here instead of to Oregon. 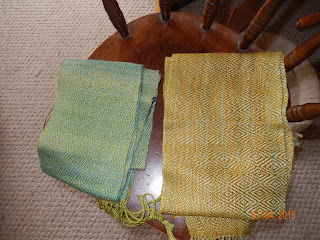 Every so often people comment on my "great sense of color" but I've had my share of clinkers, especially in my earlier projects.  I've tried to do something with these but they're Tencel and aren't suitable for purses.  The something I did was put them in the trash. 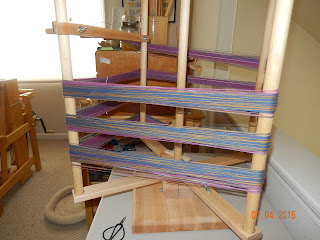 I really struggled to find information on how to use a warping mill.  There is nothing in any of my books and there were few videos on YouTube.  I don't know how to measure the yarn since there are  no pegs.  In one video the woman commented that every weaver knows that the distance between two opposite of these posts is a yard.  This weaver didn't know that!  She also demonstrated how to count the threads.  I clumped the yarn up on my first bout but by the time I finished my third one, I was starting to get the hang on laying the threads side by side. 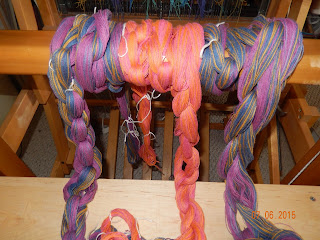 The arrangement of the colors isn't working as I had planned but since I'm warping from the front, I can change the order in the reed.  I was done for today, but tomorrow I'll figure out how I'll move them.  Ian bought me an external disk drive for my laptop today so I think I'll watch Tom Knisely's DVD about designing in the reed.  I've been wanting to try it anyway. 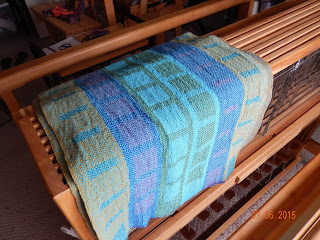 Meanwhile, the "tide pool" towels are ready to hem. 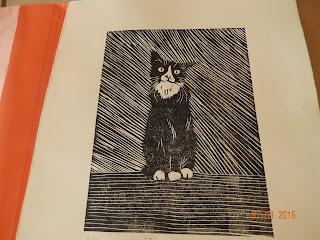 Amy drove out on Friday, the 4th of July holiday, to spend some time with us.  We used to do a lot together.  When Ian and I were both working downtown, we had lunch together fairly regularly, but we go to town as infrequently as possible since retirement six years ago. Ian made his special burritos for lunch, and she gave us this lino-print as a going-away present.  She has a number of really cool ones and is still developing her style she said, but this is still my favorite - the naughty cat. 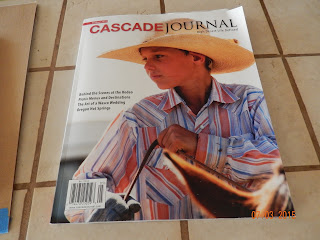 We had an added treat that day.  The phone rang shortly after Amy arrived.  Our friends John and Celia were in Susanville, on their way home from a trip to Oregon.  They had picked up this magazine for us in Bend and wanted to stop to say goodbye since they were going to drive right by here.  They stayed for a couple of hours and we all had a rollicking good visit, sitting on the front porch, accompanied by the fountain and bird songs.  What a nice day.
Posted by Sharon at 3:55 PM

Your toweling is lovely. There is so much I don't know and very little I do. :O)

I'm not at all sure that ALL warping mills are 1 yd from post to post.
Some people make a guide string everytime they make a warp. Others who make warps of certain lengths frequently will make a semi-permanent guide string (or ribbon) with the most frequently used warp lengths marked in some way - like 1 knot (black marker on ribbon) at 4.5 yds and 2 knots at 6 yds - - etc. OR mark a very long ribbon with actual yard notations.
Then, move the arms to give you the correct length.
Have you seen the pictures of how a few people have made a little shelf at the top or bottom of the mill to hold 2 or 3 cones of another color while not in use and NOT have them tangle/twist in a mess while winding? Clever. Very handy for your color changes.

I know I've seen a video of Becky from Vavstuga using a warping mill, but I can't remember which one. I do remember how easy she made it look. We're hoping to stop at Glimakra in Montana this summer. I'm thinking of buying one.