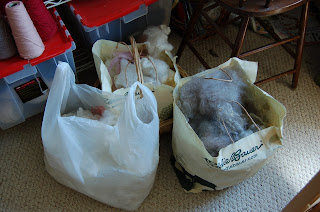 I was pretty tired this weekend after all the energy spent on our San Francisco visit and four days of work. I had "plans" but realized that I didn't have the umph to carry them out for decided to spend a little time organizing my studio. I have bags of stuff that I have shuffled from spot to space for literally years. I decided that I'd identify what was in the bags and either do something with them or move them on. I have eliminated all but these three on the floor and there are still another half dozen little ones in the closet. 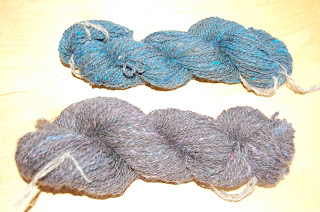 One bag had some stuff from over five years ago at least. When I blended them up and spun them, that obnoxious bag turned into these two skeins of yarn. I'm on a mission. 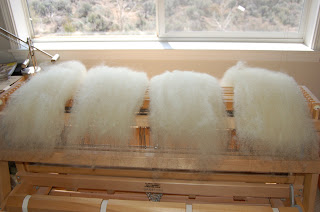 And another bag contained clots of Border Leicester that I had felted when trying to dye the locks with lupin a couple of years ago. I patiently picked through the locks and ran the good stuff through my drum carder to get these batts of yellow fluff. Laura had said to me when I was so enthralled with natural dyes that it's pretty straight forward. Most all plants dye up yellow.

And in answer to Birdsong's question, the Turkoman rug exhibit was thrilling. I had seen one of Silk Road bags at the Textile Museum in Washington DC and I had also seen an Ikat weaving exhibit at the Met in New York. Both had supplementary educational information, about the region and the peoples. My disappointment in this exhibit, and it was absolutely spectacular, was the lack of supplementary information.

It's a been unsettling, pun intended, in Reno as of late- you may have heard the news. We are experiencing an epidemic of earthquakes as reported by the USGS, and they are keeping people pretty shook up. Ian and I are 35 miles north of Reno and our house is on bed rock so we haven't been feeling them here. Amy said one of her collectible sheep feel last night and broke his legs in an unglueable way. If you look at the site I linked to, below the map is a list of quakes, the date and time and magnitude. Folks in Reno are pretty jittery right now.
Posted by Sharon at 7:29 PM

Ironic that you left SF and came home to earthquakes! You are certainly getting a bunch of them -- wondering just what is moving and where.

What with lambs and late chores because Rick has been gone so much, last night was the first night in probably a week that I've watched news. Hadn't heard about all the earthquakes; interesting!