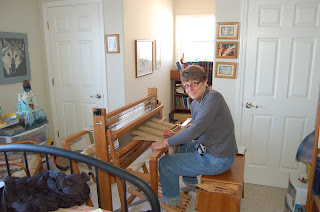 Are you talking to me? This is the second time that Ian has had to to check on me. I really have to stop humming to my music. The first time I was humming and weaving and in the background I would hear his voice. I finally paused my iPod and called downstairs, "Are you talking to me?" Are you okay? he asked. He really was worried. He seemd to think that I had fallen and was moaning.

I mailed Ken's towels last week and got this nice note in response: "Thanks so very much. They are very reminiscent of what LeeAnn had made on the loom. I appreciate what you have done and that the loom is getting used by someone who can truly use it. Now I need to find a way to display them." That made me feel good.

Our husbands must be related. I'm downstairs busy doing whatever and Bill come to the top of the staiars and yell down, "are you alright"? I wonder what he would do if I would answer him. Hum, might have to give it a try and let you know what happens. Think maybe our husbands care about us?

I'm the one who says "Are you talking to me?" a lot at our house. (Jim is sometimes talking to the dog. I, of course, talk to the dog also!)

Yeah for weaving! So glad the towels were treasured and what a nice note back. I gave my ipod to Gene, I just didn't like it. I much prefer the radio on softly so I can hear what's going on around me.

So glad Ken liked the towels. Makes you feel all warm and fuzzy inside, doesn't it?

That's quite an eclectic mix! Bonnie Raitt, Paul Simon, No Doubt, Green Day, Wailin' Jennys, and Slumdog. It must for an interesting shuffle.