Woodn't You Know It, Another Hobby 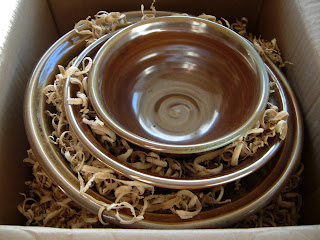 I didn't get pie plates after all. His are too big for quiche and that's mostly what I want them for. I got this set of nesting bowls instead. They're wood fired and a great trade for 15 bars of soap. 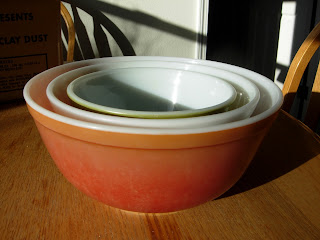 I've been using this set of bowls that I got as a wedding present in 1968. DD Chris says she'd like to have them. She only has tupperware. I can see how she'd not be big on kitchenalia, since her mother isn't either. 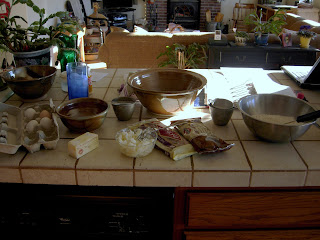 I decided, no time like the present, and launched a batch of chocolate chip cookies to christen my new bowls. I'm using palm oil, something that Leigh talked about here. I won't know what I think if I don't try it. I'm also using pecans because DS Matt is deathly allergic to walnuts. 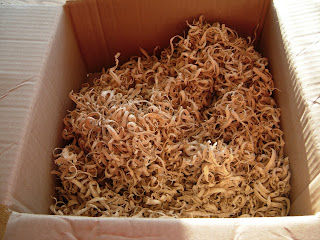 Back to the box for a second. It turns out that not only is Dale a potter, he's a wood turner, and he gave us tours of both his workshops. I had read something recently on WeaveTech about dyeing with wood chips so I asked him if he'd save them for me. He said he would and separate them out as well. These shavings are cottonwood, and since I got yellow dye from the leaves and branches, I have to assume that I'll get yellow from the shavings too.

I searched the WeaveTech posts and found the message that I read. The weaver is Sandra Rude, who has both a blog and a website. She has a pdf linked on her website with instructions on dyeing with wood chips. How do I keep finding new ways to waste, I mean, spend my time?!

Dale said he was first interested in weaving, but fell in love with pottery, though if he had discovered wood turning first, he never would have become a potter. I asked him if he was interested in making shuttles and he said, absolutely. He's going to come out here after we get back from Southern California for New Years and take a look at mine. I'm going to show him drop spindles as well. Why not??
Posted by Sharon at 3:48 PM

I still have and use my 70's daisy bowls (pyrex I think). My daughter wants them... It's funny how the 70's stuff interests the kids. One of my young blogger art friends wants a hippy bracelet in the worst way! Hey, have a "hip" Christmas!

Such lovely bowls! Have fun with the woodchips:)

Score! Those bowls are gorgeous!!! If I lived anywhere in your vicinity, I'd want to get a set too. (I've had bad luck shipping pottery).

I think dyeing with woodchips still falls under your original hobby of dyeing, so it's OK!!

Cool that you might get some custom made shuttles! Weaving and woodworking are a really good combination. I'm always wishing for various wooden things that I have no real way to get.

Love the bowls....I've always loved pottery. In fact, I was a potter before I was a weaver....but I had to go to a studio for throwing, glazing, and kiln use.

So glad you explored Sandra's site more...she has a recent wood chip dyeing post up.

If he makes any shuttles out of Osage Orange, tell him to save the shavings for you. I wonderful, strong yellow that over-dyes with indigo to make a great Kelly green.

I love to watch wood turners, it just fascinates me to no end! I've often thought it would be something I would enjoy doing.

Sandra is in my guild down here. There are some amazing people in the guild.

Love the bowls -- and your towels are beautiful! Tell what you end up thinking of palm oil, please? Curious.

The bowls are wonderful, lucky you!

Let me know when he is coming, and if I am available I could bring my collection o' spindles for him to see. I have a few... And he could bring a pie plate or two to tempt me.

Walnut shavings are good, and if he turns Australian Blackwood,it is a terrific dark brown dye (no mordant needed)

I love two things besides fiber - pottery and fine wooden made things.

My wishes to you and your family for a wonderful Christmas and very happy New Year.