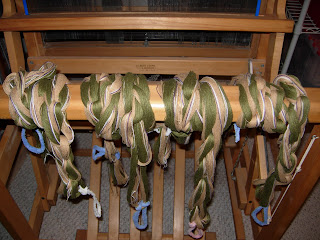 I've wound this warp for dish towels for DS Josh and DIL Missy as a house-
warming gift. Last Sunday was the first day in their new home in Bend, Oregon. Josh had been living in their 5th wheel for the past three months and was thrilled to be in their house. A 5th wheel in snow and below-freezing temps is no fun. His new job is great, but living in the trailer wasn't. Missy worries that he won't want to camp in it anymore.

The warp is hanging on the front beam of Maudie Mae. That's the name that I decided on today for my 24" Gilmore, because she's been around for quite a while, she's smaller and maybe not as fast as other looms, but she's still capable - still got it in her. So - the warp is hanging on Maudie Mae because I can't make my mind up.

Josh and Missy picked up Goldie for me from Ken. They were camping in that area and just put everything into their 5th wheel. They fell in love with Ken and when Missy relayed his desire that I weave my first project for him, she started to cry. She was very moved by him and his story. I know she would mean a lot to her if these towels were woven on Goldie. 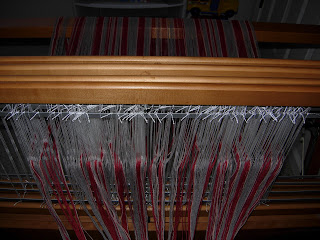 Here's the problem. I just finished tying onto the dummy warp and drawing it onto Goldie's back beam. If you're thinking about using a dummy warp, 8/2 cotton isn't substantial enough. I thought it would be, but when I drew the knots through the heddles, I had about a half dozen warps snap. I think I would still use one with handspun yarn, but maybe use 8/4 carpet warp - or silk. 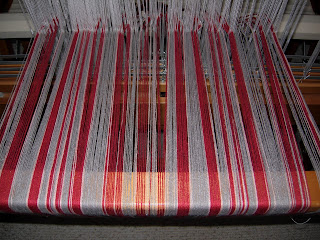 I used a Fibonacci sequence and a complex 24 heddle threading. It was a lot of work to get this far but I'm not in love with this project. And. I still have to sley it in the reed. In addition, I just got a confirmation from Webs that the five cones of cotton I ordered have been shipped. I love Missy's towels and am chomping at the bit to start. I'll sleep on it and hope I wake up with a new perspective in the morning.

Meanwhile, I'm trying to remember how to crochet so I can make some snowflakes for the Christmas tree.
Posted by Sharon at 4:21 PM

Crocheting is like riding a bike. It will come right back to you. I don't crochet very much but when I did the baby blanket for a friend's up coming baby, it came back very quickly. Snowflakes sound like lots of fun. I have made them in the past and stiffened them. I think I used them for the tops of packages. I love that you weave and I am always interested in what you come up with!

That is really surprising that 8/2 cotton wasn't strong enough - although I guess I've found that some cotton is stronger than cotton, mostly in my older purchases from the yarn table at our guild meetings.

Isn't it good to have more than one loom so you can have weaving dilemmas?

Honestly Sharon, I suspect Missy will be just thrilled that her mother in law loves her enough to hand weave her something special. She would tell you to weave them on the loom it would be easiest for YOU.

It's not the loom, Sharon...it's from you. That's what counts.

At least you're DOING something. Right now, I'm so tired and sore from shoveling (and 6-8 more inches on the way) that all I can do is look at the fiber-stuff. :(

I agree with Theresa. I'm sure the loom you use to weave the towels for Missy won't matter in the least.

Looking forward to seeing your snowflakes.

For years I have used 4/4 cotton carpet warp as a dummy warp. It works for me but I am not entirely satisfied with it as it has a twist to it and is sticky. Even with the carpet warp I have to be very cautious when pulling even a fine warp through the heddles because it breaks too. I usually sit on my bench and pull the warp knots through the heddles by hand in small groups of about 1" wide or less.
Oh, and I live in Bend OR.
Best wishes.
Stef

I usually use 16/4 linen for my dummy warps. I haven't had any trouble with the warp breaking, but it helps to "pop" the knots through before it gets taut.

I don't think Missy would know the difference. Use the loom you're comfortable with. If it's Goldie, untie it from the front apron, beam it with a cross in it, put the towels on from front to back and just tie on to the other warp in your new pattern. When the towels are done, cut them off, and re-thread to the former pattern.

I now have my loom in the dining room, and have a project ready to go on. Now that the frozen water pipe crisis is over, I can concentrate on weaving!!