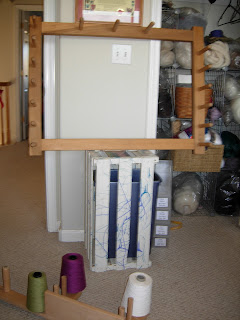 I signed up for an inkle weaving class today at our guild meeting. It won't be until the end of February, but I think it's time that I put my inkle loom to a better use than this, a glorified cone holder.

I have too many hobbies already, but our union meets on Monday because our county is broke and is offering early retirement incentives to reduce the outlay in payroll. We'll know on Tuesday what the union has agreed to and must sign an agreement by Friday if we're going to accept early retirement. Tuesdays feels like a month away. 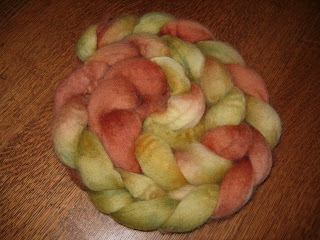 I got this from Mim today - more Blue-faced Leicester. She said when she was dyeing it that she thought it looked like my colors. I traded her soap - love the barter economy. It was her turn to drive to the guild meeting so I got lots of knitting done. I'm using the BFL for hats - the Brewery emailed me that they need more inventory and I'm trying hard to knit "inventory." My little sales here and there go into a special savings account, and while they don't add up to a lot, they did just pay for a new LCD TV that Ian ordered online. It's being delivered on Tuesday. 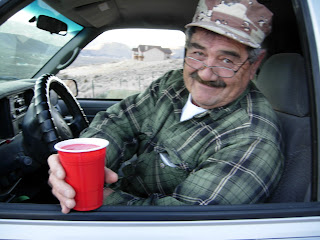 Late this afternoon, Tom called to say that he had made strawberry margar-
itas. He and Carol had already had two, so if I wanted to walk up to the gate, he'd drive down and bring me one. That's what I call being neighborly.
Posted by Sharon at 6:12 PM

Wow! A neighbor who will bring you strawberry margaritas. Doesn't get much better.

Actually that BFL has a bit of a strawberry margarita look to its colors. Hmmmmm

Where did you find such a great neighbor and are you willing to sharing him with the rest of us?

I never throught of using my inkle loom for a cone hold. Great idea! I'm sure your workshop will be fun.

I love the guild meetings every mouth! The ladys there always inspire me. Then to come home to a margarita can't get much better!

Love the color of the BFL roving. And, margaritas from your neighbor tops a cup of sugar any day!

I tried to leave a comment just now and it said it was a duplicate. So hopefully this will not appear twice.

How nice for you to have such a wonderful neighbor. We don't see much of ours becasue they are wrapped up in their own lives and don't have much time for other things.

I have given notice at my job and that means that I will have more time to garden, spin, knit and clean out my office. I am sure you will stay busy too if you chose to retire.

The LCD TV sounds great. That means that you have been knitting lots of projects!

That's the best kind of neighbor to have! It's amazing how quickly a little spare changes adds up. The roving is beautiful. I'm looking forward to seeing it spun!

tell mim i love her dying!

wish i had a neighbor like that-you are one lucky gal!!!

btw- your soap is getting rave reviews!!!!