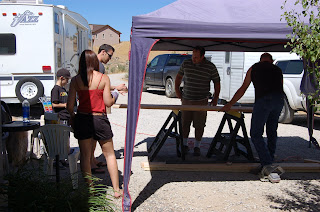 My oldest stepson Dougie is a cop with the San Diego PD and has been riding a mountain bike on beach patrol all summer. He says you know which house is having the coolest party by how many people are standing on the beach, watching. That's where he got the idea for giant Jenga. He went into town for more ice - we spent so much $$$ on ice - and came home with 2 x 4 lumber in the back of his truck. They set up production, cutting into 12" pieces and sanding. Everyone was sanding, even the children. 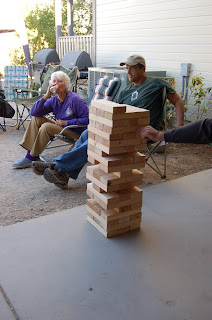 Jenga games were set up and tested throughout the day. The children set up the first game, followed by several games inside the third bay of the garage. It was slow to take hold, but by the time our neighbors stopped by in the afternoon, Jenga was on the ajenda - hah! This game is already about half way and players just jumped in, unable to resist until a rotation was in order - there seemed to be about five in a game. 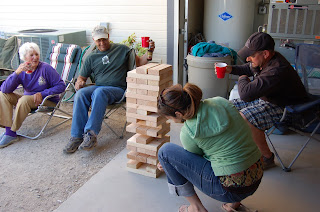 Megan is taking a turn, next to DS Josh. They are stepsibs on my ex-
husbands side. She, her husband and three kids and mom were out on Sunday. Life is too short not to embrace the family you've been dealt. I think that's pretty much the consensus here. 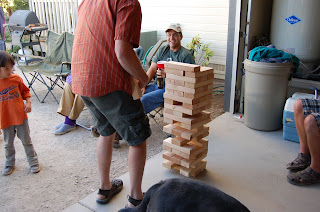 Joe's turn. You can see how precarious it gets the longer the game goes. Plus, we're getting some of the Washoe Zephyr breeze effect swirling back into the garage, even though the door opens to the east. 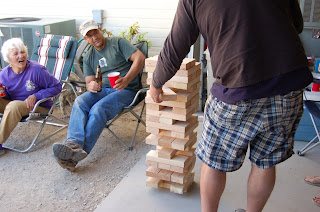 And now it's DS Josh's turn. If you're unfamiliar with Jenga, the rules state that you can only use one hand for the maneuver, which is fine for the table-top version. It's much more difficult with with the weight at this size. 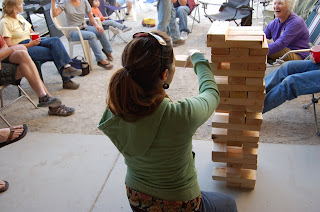 And many turns later, Megan is up again. This is a great spectator sport, just as Dougie had noticed. Everyone gets engaged - how can they not?! To the very left, in the gray t-shirt, I notice that Shiho is talking to Chris, in the yellow t-shirt in ASL. Chris is profoundly hearing impaired and while we converse on Facebook, I'm now learning ASL myself. Shiho hardly speaks English and can talk to Chris. She has shamed me into action. 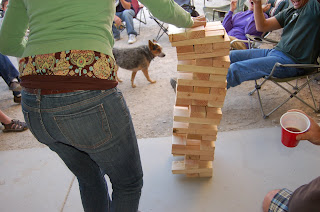 Always in Jenga, there comes the moment when the balance is unsus-
tainable. She still only gets to use one hand and is trying to stabilize the stack, which is taking on the appearance of a spinal cord. Oh what fun and what a great idea! Next year it would be fun to have those pieces painted bright primary colors! I'm assuming should one want to copy that brilliant idea, the pieces are 2x4x12"?
The whole party sounds like a wonderful time. I'm so sorry you had to be pumped up on prednisone. It's a tough drug on the body. Hope you're weaned off of it by now. Enjoying the cooler weather over there?

Giant jenga is brilliant!! Jenga is a favorite game at our family gatherings...and the giant version would be even better! Great idea!

The giant Jenga looks like too much fun!!! Even the production of making the pieces was a family event. Great idea!

That looks like a lot of fun! Will have to remember that for our next get together.

Wow. Giant looks like more fun than the "regular" size. I've never seen it before!