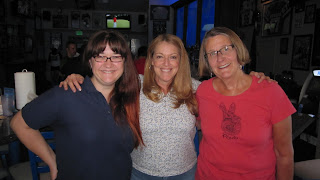 I had planned to meet my fitness coach at 2:30, Melissa was going to come to the gym and swim with me afterwards, and then I'd hang around town until 6:30 to watch Alexia at judo. The phone rang early. It was my friend Lori, she's in town, could we have lunch? She and Joe moved across the street when she was pregnant with Mike, and in spite of moves and life changes, we have remained friends for 27 years. DD Chrissie used to babysit her boys! We ate close to the U where she works so she could join us.

She's en route from Tampa to San Diego. Joe is a boat pilot and skipper on a yacht tendered at Point Loma. They'll live there until they move yacht to Puerta Vallarta for the winter - lots of visiting in a very short amount of time. 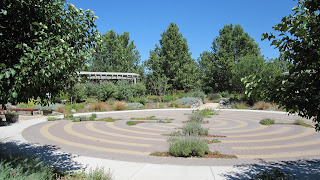 I had an hour to kill so went to San Rafael Park and walked the labyrinth, then read my Kindle until it was time for my appointment. Melissa called and begged off, saying she needed to recover from her workout yesterday and Chrissie said Alexia didn't finish her homework, so wasn't going to judo. Yikes! 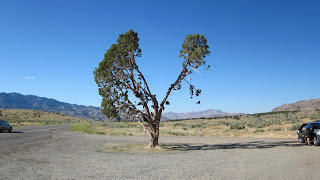 I had a fabulous swim, less gasping and more breathing. Driving home I realized that the shoe tree is full of shoes again. (I posted several months that there wasn't a single shoe on it, someone had removed them all.) 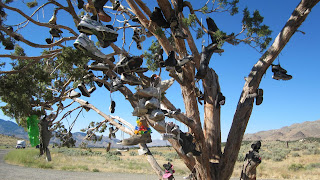 People really have a lot of fun with it. Last year when California widened the shoulders along this stretch, they put stakes and orange tape around the tree to ensure it wasn't harmed during the road work! 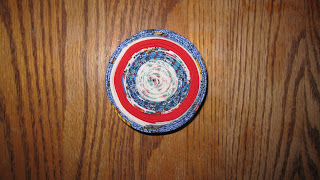 I cut and sewed a set of strips this morning and wound them up this evening. I'm going to weave it before I cut anymore. Theresa said she leans toward "go bright or go home." I may have gone a little over bright. I should have time tomorrow to find out.

I think you'll love the newest placemats. In fact, I think they'll be the first set to sell!!! The shoe tree is a wonder!

I'm with Theresa....you can't go TOO BRIGHT.
Love your fabric rolls, and the labyrinth too.......I love mine.