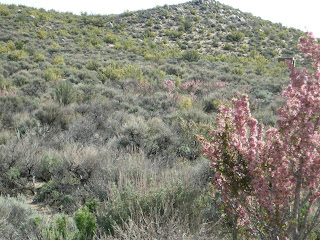 Because spring is so late this year, the pink Desert Peach is blooming at the same time as the yellow Bitter Brush. It's a specta-
cular show and very hard to capture on camera - can't say "on film" anymore, can we now. What was easy to get a picture of was Buster trying his best to herd Sammi, which is pretty much like trying to herd cats. He's just trying to do his job and she thinks he's cute and quite funny. Almost the entire walk, Buster is herding and she's playing. It can get annoying, but they seem to have an understanding. 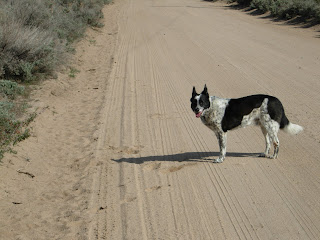 Then there's Eddie, the old man, waiting for the kids to shake out their sillies at the end of the walk. We begin with everyone trying to herd everyone, then it digresses into chasing rabbits and ends up with Buster trying be the boss. I walk a mile - they run three. 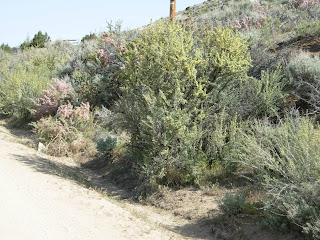 Here's Bitter Brush growing alongside Desert Peach. When almost all vegetation is sage green, it is absolutely delightful to see these banks of yellow and pink dotting the hillsides throughout the whole valley. I took dozens of photos but just couldn't capture what I was actually seeing. 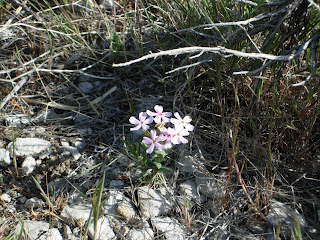 One of our staff lives on the Reserva-
tion and said that the wild-
flowers are exploding up in her valley. Nope - I said - we don't have any at all and definitely no explosion. I haven't seen any yet and so took the camera this morning, just in case. Nothing again, then here at the bottom of our driveway, I see it. Phlox! Isn't it a sweet little thing?! Not an explosion but I'll take it. 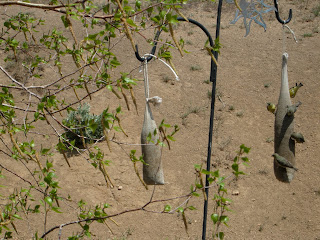 Before going into the house, I decided to pull some of the weeds from our flower bed, such as it is. Then I realized that the finches were completely ignoring me. 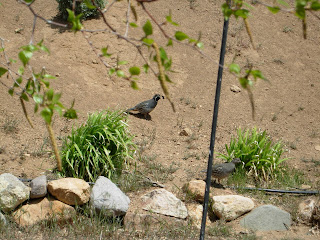 I was still yanking up grass and weeds, when Mr. Quail ran down the bank, followed by Mrs. Quail, but by the time I depressed the shutter for a second shot, they had both run out of the frame.
Posted by Sharon at 6:16 PM